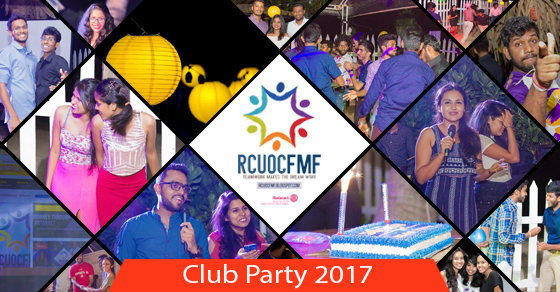 The annual get together of our club took place on the 10th of February, at Beach House Bistro, Dehiwala, from 7.00 pm onwards. It coincided with the 6th anniversary of the club and was attended by both current and past club members numbering over 60 of them. The event which continued till early hours was a great success and no doubt, would remain in the hearts of all those who attended for many more years to come.


RCUOCFMFers were treated to a variety of drinks and a sumptuous dinner too with some lovely DJ music being played in the background, thus providing the necessary impetus to celebrate the event in style. The energetic beat of music tracks played by the talented DJ lifted everyone’s mood high, keeping the momentum going throughout the night as well as keeping their toes tapping, as some of them took to the floor voluntarily enjoying the choice of music thoroughly.

Among the perfect blend of palatable food, drinks and music, the much awaited and the most exciting event on the night’s agenda was to look for the “secret valentine”, as everybody who received a gift kept wandering as to who their valentine might have been because the secret was kept from them by the organizers as a rule of the game, making everyone happy having received gifts which added more glamour to the event.


A significant event that took place during the event was the re-launching of the club blog followed with a cake cutting ceremony to mark the occasion of 50000 blog views, which is a great milestone of the club.

That was not all, another fun filled event on the agenda was games such as paper dancing, musical chairs etc. in which almost everybody took part and enjoyed. This provided the club members with the opportunity to keep their minds off the strenuous day to day studies at the university and refresh their minds and bodies and energize themselves.


It also offered a valuable opportunity for the newly joined members to mingle and make friends with the past members of the club, catch up with one another in a friendly atmosphere, enjoying each other’s company.

In conclusion, our special thanks go to each and every person who helped to make the club party a great success, including our President Rtr. Christeena Hiruni Perera who hosted the event; the Co-Chairpersons, Rtr. Akshana Perera and  Rtr. Yasitha De Silva and the whole committee who organized the eventful evening, ensuring a smooth run of all the activities and finally a memorable night for all.