Posted at 08:02h in External Club Events, Others, Uncategorized by rcuocfmfadmin 0 Comments
Sexual harassment has become one of the
major concerns in Sri Lanka these days. Most women are subject to harassment in
the street, workplace and even in public transport. Although many of us are
aware of what sexual harassment is, there are many others who are unaware of
what it entails. Sexual harassment could be any unwelcome act of sexual nature, using assault, criminal force, or
words or actions, which could cause annoyance or pain of mind to the person
being harassed. From catcalls on
the street to the dangerous practice of asking for sexual favors in return for
workplace perks, the kinds of sexual harassment that take place are many. It
can be considered a human rights issue as it limits the ability for a woman to
be in public places as often comfortably as most men can.

Many of us are conditioned from childhood
to accept sexual harassment as a way of life and this is why most women are
told and even choose to restrict their lives. What is more unsettling is that
society allows it and there seems to be no one taking action to mitigate sexual
harassment. It’s important that we move away from this thinking and proactively
take steps to speak up against it. Thus people should be made aware of sexual
harassment and its connotations and what actions they can take against it.

The Rotaract Club of National School of
Business Management (RCNSBM) together with United Nations Population Fund
(UNFPA) hosted “Young Social Change Platforms” (YSCP’s), a campaign of the
project #OTW (On The Way) with the aim of educating young male and female
representatives from various youth organizations on the prevention of sexual
harassment. This event was held on the 7th July 2015 at the National
School of Business Management (NSBM) premises from 1.00 to 4.00 p.m.

Representing our Rotaract
Club, Rtr. Ranithri, Ruvini, Hiruni, Umanga and Bimla attended the workshop and
they had a wonderful experience which they shared with the rest of our members.

About #OTW
#OTW or On The Way is an innovative
concept of a Social Change Entrepreneur at United Nations Population Fund. It
is a project dedicated towards the recognition of the sexual harassment in
transport in the Penal Code of Sri Lanka with the collaboration of Ministry Of
Justice by conducting evidence based national research on the prevailing issue
of sexual harassment in public transport in Sri Lanka. This can be seen as an
effort taken by the young social change entrepreneurs at UNFPA to create
awareness of sexual harassment among the youth and thereby make a social
change. By conducting such programs participants could be given the opportunity
to share their knowledge and understanding among their peers so that they
themselves can make a social change impact.

This community service initiative
hosted by Rotaract Club of NSBM brought about many participants such as
interactors, rotaractors and the undergraduates of NSBM together and the
workshop was indeed highly productive and was a fun filled one with various
innovative and engaging activities.

Ice breaker
The workshop
began with an introduction to
the project #OTW (On The Way) by Naushalya Rajapaksha, a Social Change Entrepreneur to United Nations
Population Fund, who highlighted the main purpose of #OTW and the importance of
making a social change as a means of preventing sexual harassment.

This was
then followed by an ice-breaking activity which gave all participants an
opportunity to interact with each other and introduce themselves. The
participants were asked to stand up and walk around the room while music was
being played and when the music stopped each person had to share with the
person standing next to him or her, ‘the things they wanted to but couldn’t do
due to being a girl or a boy’.


This was quite an innovative session
and was indeed a good start to arriving at the matter at hand, which was to
create awareness among the participants about practices that promote gender
inequality in the society at present.

Some of the most common obstacles girls
had were not being able to go out alone or with their friends or even if they
were allowed they had a curfew time, no use of public transportation and no
drinking/ smoking or late night partying.

It was seen that most boys were able to
do things they wanted to do. However some did have obstacles such as not being
able to learn how to cook or wear makeup and also when travelling in public
transport the difficulties they face when they are not given a seat etc.

The session was then concluded by
Naushalya highlighting that, as girls or boys we are restricted from doing
certain things in life, such as those mentioned above due to different ‘gender
roles’ which constitute attitudes and behaviors that are expected of us in a
given culture of society and it is these different roles that lead to gender
inequality among males and females.

Sex Boxing
Are boys
capable of becoming scientists or engineers than girls? Are girls better at
activities such as cooking, sewing or dancing? Gender
stereotypes are abundant in society. Gender differences among males and females
exist in nearly every social phenomenon and these differences influence how
boys and girls are treated in society.

As tempting as it sounds, the focus of
‘Sex Boxing’ was on how these stereotypes that place boundaries on the two
genders are initiated. Senel Wanniarachchi, the Youth Delegate to the United
Nations 69th General Assembly 2014 started the discussion with a question
directed at the audience, “Nature vs. Nurture?” He argued that gender
differences could be due to biological makeup (‘Nature’) or due to an
individual’s social surroundings and the way they are brought up (‘Nurture’).

For instance, boys are said to be more
physically aggressive than girls, a difference due to biological reasons.
Further in almost every culture there are practices that promote gender
specific behaviors. The environment in which the individual lives and the
specific culture foster the idea that certain behaviors are more appropriate
for males and others are more appropriate for females. Hence the environment or
‘nurture’ would drive boys to pursue careers in fields such as engineering,
science or IT, or to select sports such as boxing, football or cricket which
are said to be more appropriate for them than girls.

As Senel pointed out, these gender
stereotypes are prevalent and influenced by family, school, media and society
at large. For example, parents tend to treat their sons and daughters
differently by offering specific toys such as dolls for girls and cars for
boys. TV, movies and books have always and still portray male figures as
aggressive and in leadership roles while portraying females as domestic and
obedient.

Senel was able to make this session
very interesting and interactive. He showed pictures of outfits, toys and
cartoons and got participants to select what a girl or a boy would probably
prefer. Girls selected a pink dress as their outfit, Barbie doll as the toy and
‘Snow white’ as the cartoon whereas boys selected a blue t-shirt, Batman as the
toy and ‘Aladdin’ as the cartoon.

The session helped participants seek
out for the “ideal man” and the “ideal woman” by “boxing” these different perspectives
of participants. As a result it was identified that men were the Providers, the
Protectors and were supposed to be intelligent, strong, aggressive, smart and
confident whereas women were supposed to be domestic taking care of children
and the household, pleasant, innocent, calm, soft spoken and fragile.

The manner in which the ideal
“man” and “woman” have been stereotyped is what leads men
and women to be treated differently by society thus promoting gender inequality
and it is these different ways of treating both genders that translate back to
why there is harassment, rape or abuse in society.

The session came to an end with Senel
concluding that “because of the way I have been taught by family, school and by
society, I think it’s ok to harass a girl in a bus or on the street and that I
can get away with it because I am a boy and I have that kind of power. I have
been given that power by family, school and society. So as a boy I have been
taught that I have the kind of power to do so, which of course is not fair
because it’s not biological.  For
example, Naushalya can be more biologically powerful than me, but the way
society treats the two of us is different, which is not fair.”
The SELFIE MOMENT!!
Just before the break all participants were
asked to like the Facebook page of the ‘United Nations Population Fund (UNFPA),
Sri Lanka’ and to post a selfie on the page with the caption “#OTW”. This was
pretty exciting and everyone enjoyed the moment. 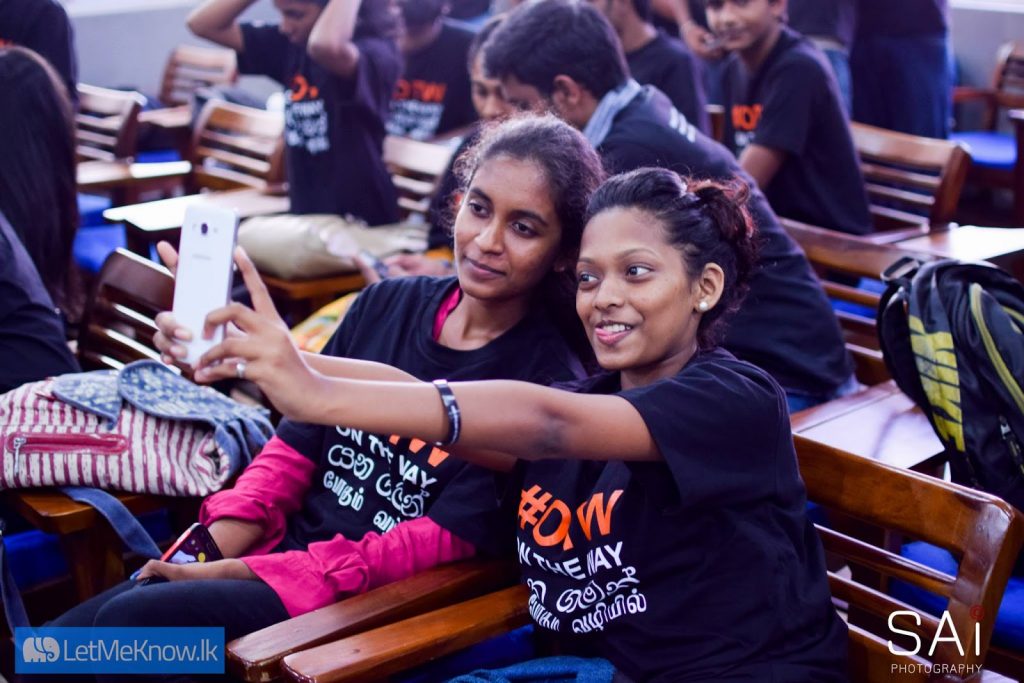 Forum Theater
The final session of the
workshop was conducted by Kapila Rasnayake, National Program Coordinator at the
Foundation for Innovative Social Development (FISD). He too spoke on the topic
of ‘Gender inequality’ and how individuals are
psychologically programmed to base their lives on what gender they represent.
Since smaller days we have been taught to choose our way of life basing on
gender roles. Although gender roles are realities in almost everyone’s lives,
it is the reason why we face inequality among one another. Kapila argued that
this stereotyping that begins from birth itself and the attitudes and
perceptions that appear with such stereotyping is what leads to sexual
harassment in society.

Kapila’s
session was absolutely entertaining and interesting and all participants enjoyed
every bit of it. He concluded the session by highlighting the importance of
changing one’s self, attitudes and perceptions through which a social change
can be made. And this change could, in the long run mitigate the consequences
of gender inequality and thereby stop sexual harassment. 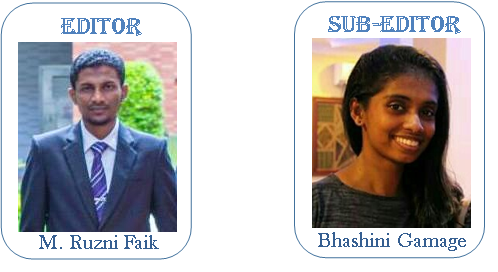