Posted at 14:53h in Installations, Others, Uncategorized by rcuocfmfadmin 0 Comments
The 46th Installation Ceremony of President Rtr. Shiraz Akbarally and the Board of Directors of Rotaract Club of Colombo, for the year 2015/2016, was held on the 15th of August 2015 at Akbar Brothers Ltd, Colombo 10.  On behalf of our club Rtr. Hiruni Perera, Rtr. Bimla Kannangara and Rtr. Umanga Kariyawasam attended the event.


The event commenced with the lighting of the traditional oil lamp by the Dignitaries. The Chief Guest for the evening was Dr. Chris Nonis who is the Presidential Advisor on International Affairs, Guest of Honor President of Rotary Club of Colombo Rtn. PHP Rohan Karunaratne, and other distinguished guests were DRR Rtr. PHF PP Sathiyeandra Tharmakulerajasingham, Youth Services Chair Rtn. PHF PP Farzana Khan and DRCC Rtn. PHF Saifuddin.

Starting with the proceedings the Secretary’s Report was presented by the Vice President Rtr. Minal Cabraal highlighting the key projects completed for the year ended 2014/2015.
Key Projects of the year included:

Next the outgoing President Rtr. Alefiya Ameerali addressed the gathering and shared her thoughts and experiences of her term in the office at Rotaract Club of Colombo. She said that she got to know people better and developed existing relationships. Also she emphasized the fact that you don’t have to be a President of a Rotaract Club to get the benefit of Rotaract Movement, but involvement in a single project would help you to make a positive impact to the society. She then thanked her board members and club members for all the support, her family and the Rotary Club of Colombo for assisting her to complete a successful year.


Incoming President Rtr. Shiraz Akbarally was officially handed over the responsibilities of the club and said that Rotaract was simply his family. He also stated that he would not make grand promises as President but hope to serve the year ahead with utmost commitment and determination.


With the re-launch of their website and re-designed logo, Rtr. Shiraz said that they hope to make more friendly relationships. Finally he invited everyone to join together with the club’s theme to do more together as a family.

An entertainment item by Sheaam and Shamistha Deen then graced the occasion.


DRR Rtr. PHF PP Sathiyeandra Tharmakulerajasingham addressed the gathering by stating that Rotaract was introduced to Sri Lanka by the Rotaract Club of Colombo, adding that this was their 46th Installation but the district recently concluded only their 25th Anniversary.


He acknowledged the participation of Rtr. Alefiya and her board in the district last year. He said to Rtr. Shiraz that Rotaract runs in his blood and family. He also invited everyone to get together and celebrate this year’s theme “Be a gift to the world” to celebrate humanity and diversity and concluded his speech by wishing everyone happy voting!


He said that the purpose of Rotaract is to prove a platform for young men and women to sharpen and enhance skills to face challenges and an opportunity to meet like-minded individuals to share joy and happiness. He then congratulated Rtr. Alefiya for completing a successful year and wished Rtr. Shiraz for a wonderful year ahead. He also mentioned that knowing that his family is filled with Rotarians and Rotaractors, he would know the challenges and responsibilities that come forth with the office.


He concluded by emphasizing on a quote by Ralph Waldo Emerson,“The purpose of life is not to be happy. It is to be useful, to be honorable, to be compassionate, and to have it make some difference that you have lived and lived well.”


Next Dr. Chris Nonis addressed the gathering by stating that it was a privilege to be present and that he shared some of his thought in line with the club’s theme.


He said that based on his experience in Commonwealth and International affairs he found out that democracy was the binding factor which bridges the gap between population and economic differences between developing and developed countries. He said he admired 3 leaders who took countries from developing to developed nations:Nelson Mandela, Lee Kuan Yew and Dr. Mahathir Mohammed. He then said that these leaders had 3 qualities in common: educated individuals who value education, ability to let go of ego and put your people first and value the education of the youth.


Dr. Chris Nonis then said that the 3rd quality is in line with the club’s theme ‘Learn, connect, share’. “Learning” would help Sri Lanka to make the transition from developing to a developed nation. “Connect” is to go for a knowledge based economy and get involved with new technology. “Sharing” is to understand that success is a gift to share with others. By sharing the fruits of our success Sri Lanka can be successful.


He ended on the note “No one ever becomes poor by giving” a quote by Anne Frank.


The Felicitation of the event was done by DRR Rtr. PHF PP Sathiyeandra Tharmakulerajasingham and with the Vote of Thanks by the Secretary Rtr. Raakhee and the National Anthem, the event concluded.


The Rotaract Club of University of Colombo, Faculty of Management and Finance wishes the new President Rtr. Shiraz Akbarally and his board a very successful year ahead. 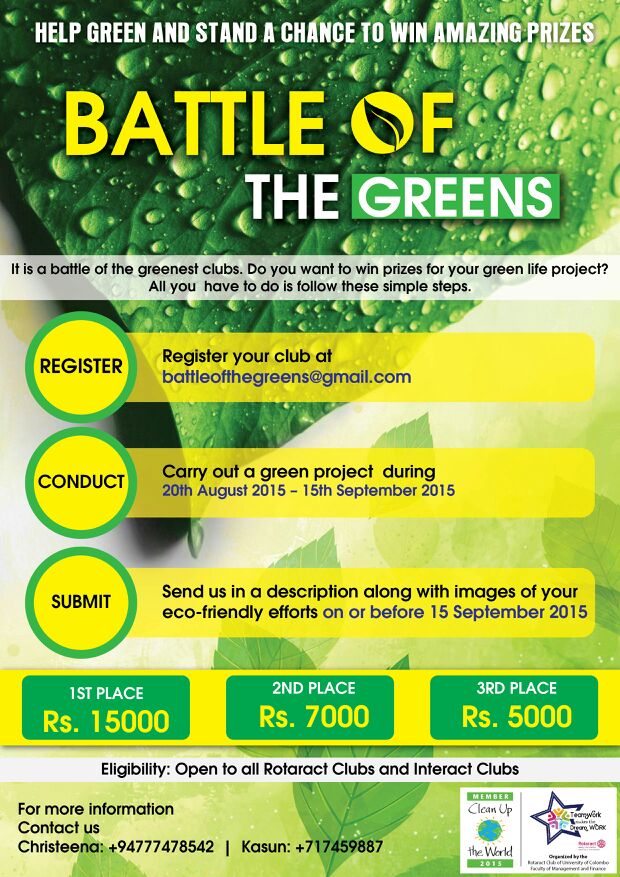