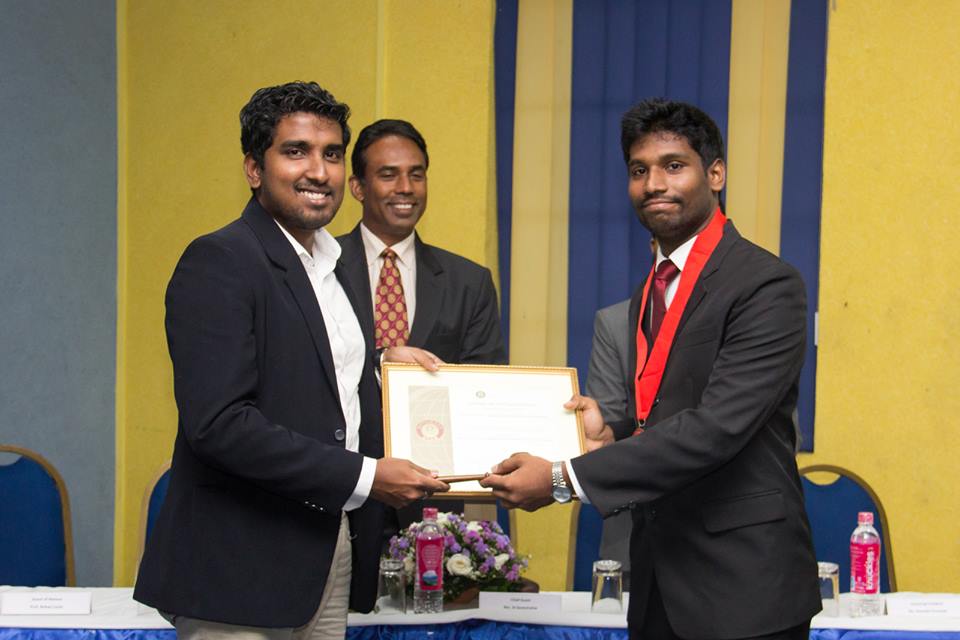 Posted at 10:06h in Installations, Others, Uncategorized by rcuocfmfadmin 1 Comment
The 3rd installation ceremony for inducting the Incoming President of the Rotaract Club of Alumni of University of Moratuwa, Rtr. Hansaka Fernando and his Board for the year 2015/2016, was held on the 13th of September at Royal College Skills Center, Colombo. On behalf of our club Rtr. Gayaka Karunaratne, Rtr. Nishra Marickar and Rtr. Umanga Kariyawasam attended the event.


The event commenced with the lighting of the oil lamp by the Dignitaries at the Head Table, Youth Service Director of Rotary Club of Colombo West Rtn. Yukthi Gunasekara, and the Project Chairperson Rtr. Ishara Paranawithana. The Dignitaries for the evening were:

With the house called to order by the Outgoing President Rtr. Dulitha Wanniarachchi and the Flag Salutation, Rtr. Ruwini Kodippilee read the Rotaract Invocation and the Four Way Test, which was followed by the Rotaract Song.


The welcome address was delivered by the event Chairperson, Rtr. Ishara Paranawithana. The Secretary’s Report for the year 2014/2015, was presented by the Outgoing Secretary, Rtr. Lalindra Jayaweera, as a video clip including photographs of the projects that were carried out during the past year. Some of the key projects undertaken by the club in the last year are as follows-

The Outgoing President, Rtr. Dulitha Wanniarachchi shared the experiences he had gained as the President of the Rotaract Club of Alumni of University of Moratuwa. He claimed that the Incoming President Rtr. Hansaka Fernando has the potential and will take the club to greater heights, which was initiated by Rtr. Lahiru. He expressed his gratitude to the Outgoing Board for the immense support given during the last year.

The speech of the Incoming President, Rtr. Hansaka Fernando was mainly based on the contribution that the Rotaract movement makes to provide experience to its members through the involvement in various projects.


Next in line was the induction of the Board of Directors for the year 2015/16 which consisted of the following Rotaractors.

The gathering was then addressed by DRRE Rtr. PP Mohamed Husni, whose speech was mainly based on the importance of the retention of members. He appreciated the Rotaract Club of Alumni of University of Moratuwa for proving that neither personal nor other reasons are valid to quit the Rotaract movement. He suggested to the Incoming President as well as to his Board to share their experiences with fellow Rotaractors, to inspire more members to remain in this movement even after their studies. Further, he mentioned that he was looking forward for more sustainable initiatives from this club as well, through their professional experience and networks.

Rtr. Hasini presented the illustrious profile of the Guest of Honor, Professor Rohan Lukas, along with a token of appreciation on behalf of the Rotaract Club of Alumni of University of Moratuwa.


Next item in the agenda of the event was the address by the Chief Guest, Rtn. Jith Seneviratne. Firstly he congratulated the outgoing President Rtr. Dulitha Wanniarachchi for completing a great year – doing good to fellow citizens. He mentioned some important facts about the history of Rotary, which was founded on the 23rd February 1905 by Paul Harris, with the intention of inspiring fellowship among the members of the business community. Further, he emphasized on the fact that currently there are over 1.2 million Rotarians across 200 countries.


He specifically mentioned that Rotary is the only Non-Government Organization that has been granted a permanent position in the United Nations. He also mentioned that the current Rotaract year will be of greater importance especially to Sri Lankans as Rtn. K.R. Ravindran has been appointed as the President of the Rotary International for year 2015/2016.


The 3rd Installation Ceremony came to an end with the Felicitations, the National Anthem and the House called to order for refreshments and Fellowship.


The Rotaract Club of University of Colombo, Faculty of Management and Finance conveys its best wishes to the Incoming President and his board for a successful Rotaract year ahead.