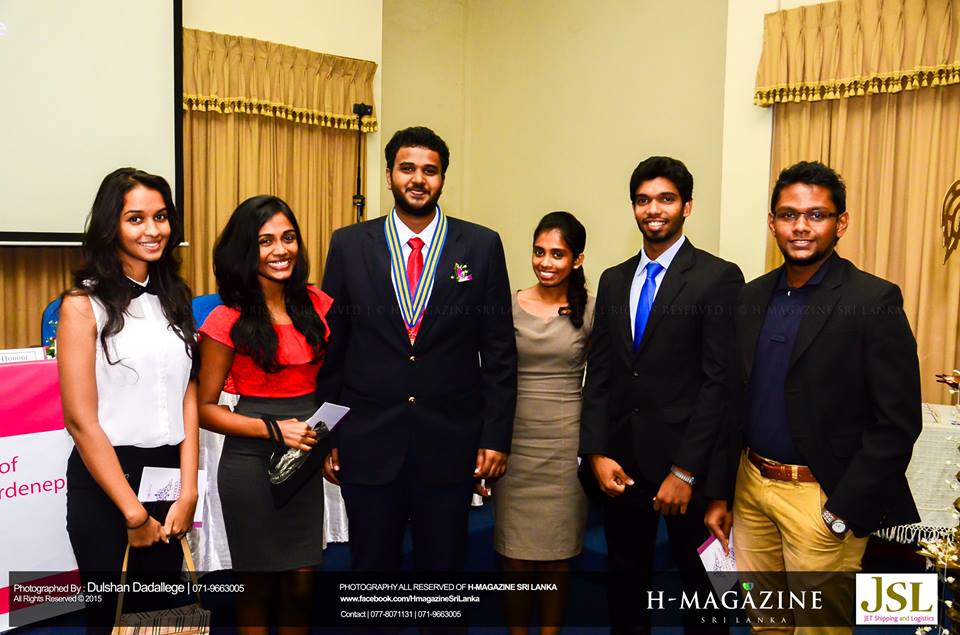 Posted at 03:41h in Installations, Others, Uncategorized by rcuocfmfadmin 0 Comments
The 5th Installation Ceremony to induct the Incoming President Rtr. Abdul Baasit and his Board of the Rotaract Club of University of Sri Jayawardenapura was held on the 26th of August. Representing our club Rtr. Chathura Kularathna, Rtr. Kasun Mullegamgoda, Rtr. Shalini Wijewardana, Rtr. Hiruni Perera and Rtr. Bhashini Gamage attended the event.
With the arrival of the Chief Guest and the other dignitaries, the house was called to order. The Flag Salutation, the Four way test and the Rotaract Invocation was given by Rtr. Meenu Perera. The gathering was then welcomed by the project chairperson Rtr. Jinandi Kumarage.
The Secretary’s report was presented by the Outgoing Secretary Rtr. Danisha Liyanage. She was happy to mention that the club was able to successfully complete 24 projects in total in the past year, including 11 Community Service projects, 6 Professional Development projects, 2 International Understanding projects and 5 Club Service projects. Some of the projects carried out by the club during the past year include:

The Outgoing President Rtr. Ranisha Weerakoon was happy to speak about her experiences as the President of the club for the year 2014/2015. She went on to say that nothing is impossible in life if you have the will and the commitment and you must also remember that it is hard to please everyone. She made it an opportunity to thank a few individuals who contributed immensely and helped her to fulfill her duties as the President.

The introduction to the Incoming President was given by the incoming Vice President of the club, Rtr. Sachindra Sanders which was followed by a short Video clip about the President. Following this the Incoming President Rtr. Abdul Baasit was collared. Rtr. Abdul Baasit mentioned that there are three reasons why he is in this position today. One reason was the commendable leadership of the Outgoing President Rtr. Ranisha Weerakoon. Second reason was his parents and thirdly it was the members of his committee.
He then went on to introduce the members of his board. The newly appointed Board of the club consists of the following individuals.
The gathering was then addressed by the DRR PHF Rtr. Sathyendra Tharmakulerajasingam. He thanked the Outgoing President Rtr. Ranisha Weerakoon for having completed a wonderful year. He also mentioned that the club is one of the rare and strong clubs with more than 100 members. He also appreciated Rtr. Ranisha for her hard work as the District Secretary. The DRR further appreciated and highlighted great Rotaractors produced by the Rotaract club of the University of Sri Jayewardenapura.
The Chief Guest Professor Sampath Amarathunga, who is the Vice Chancellor of University of Sri Jayawardenapura, was proud to talk about the club and what it has done in the previous year. He recalled how the club was initially started and he promised to help them as much as he can, in their work.
The Youth Committee Chair PHF Rtn. Farzana Khan mentioned that Rotaract was not there when she was an undergraduate and she was a Rotaractor outside the university, in the Rotaracrt Club of Colombo. She also mentioned a saying of the 3rd President of USA Thomas Jefferson: “I like the dream of the future than the history of the past”. She mentioned that what you do in Rotaract makes you special among the others when you enter the job market.
The floor was then open for an entertainment item which was performed by four undergraduates of the University.
The Guest of Honor for the evening Rtn. Suranga Palliyaguruge mentioned that this club is a unique club and he also mentioned that human resource is the biggest resource and that you must use it to do good to the society. The joy you get after completing a project must be used as learning so that your journey will be truthful.
The floor was then open for Felicitation, followed by the Vote of Thanks and the National Anthem which concluded the installation ceremony.
The Rotaract Club of University of Colombo Faculty of Management & Finance wishes all the very best to Rtr. Abdul Baasit and his Board to have a successful year ahead.