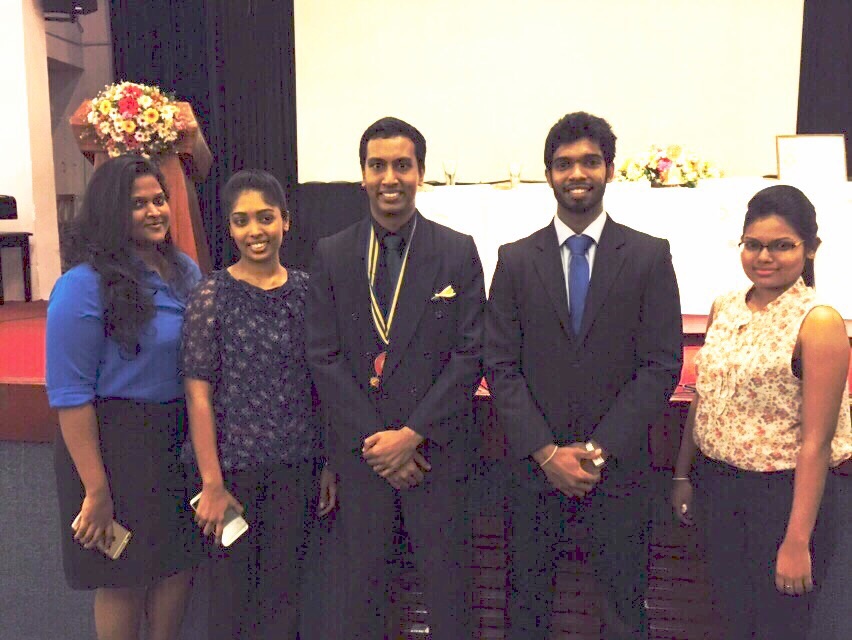 Posted at 03:30h in Installations, Others, Uncategorized by rcuocfmfadmin 0 Comments
The 4th Installation Ceremony of  President Rtr. Yeheshan De Silva and his Board of Directors of Rotaract Club Of Cinnamon Gardens was held on the 21st of August 2015 at the Russian Cultural Center, Colombo. Rtr. Nawangi Poholiyadde, Rtr. Dilini Perera, Rtr. Ruvini Hettiarachchi and Rtr. Chathura Kularathna attended the ceremony on behalf of our club.


The main focus of the club is to create awareness, unity and team work among members while striving to make a positive change in society. Thus the theme for the year has been set as “Synergy Through Service”, in order to encapsulate their objectives clearly.


The event commenced with the arrival of the Chief Guest and other dignitaries. The Chief Guest for the evening was Rtr. Thilan Anuradha, who was the President of Rotaract Club of Cinnamon Gardens for the year 2010/2011. The house was called to order soon after the lighting of the oil lamp, flag salutation, Rotaract invocation and the Rotaract song.


The welcome address was given by the Outgoing Secretary which was followed by the Secretary’s Report for the year 2014/2015 which was presented as a video clip including photographs of the projects the club had carried out throughout the year. “Baila Night” and the “Poya Day Project” were some of the projects which had been carried out successfully.


The Outgoing President Rtr. Abitha Pahmanathan shared her memories and experiences she gained as the President of the Club. She claimed that the journey had many ups and downs throughout her tenure as the President. She expressed her heartiest gratitude towards the Board members for their unstinted support.


Next in line was the speech of the Incoming President Rtr. Yeheshan De Silva. He revealed how much he is enlightened for being selected as the new president. He mentioned that the ultimate objective of them is to embark on a journey to bring the Rotaract Club of Cinnamon Gardens to its former glory. He claimed that it is not an easy task to run a community based club. He also mentioned that they are currently in the process of recruiting new members to improve their membership pool. He further mentioned that the year ahead is going to be an uphill struggle, as they have 25 projects that they are bound to complete. He thanked the Rotary club of Cinnamon Gardens who have pledged their support and guidance in all their endeavors.


Next the new board was introduced and each board member was officially handed over with their responsibilities by their new President. The board of RCCG for the year 2015/2016 is as follows-

Next was the speech of DRR PHF PP Rtr. T. Sathiyendra Tharmakulerajasingham, where he mentioned that the club has produced really good individuals. Therefore he remarked that the Rotaract District has higher expectations about the club.

Next up was an entertainment item performed by two of the club members, Rtr. Maria and Rtr. Sam.


The gathering was then addressed by Rtn. PP. PHF Farzana Khan, the Youth Services Chair, who enlightened the gathering by explaining the benefits of being a Rotaractor. She mentioned how good values, abilities and capabilities are being inculcated in a Rotaractor by serving the community. She specifically mentioned on how to enjoy the journey in Rotaract every single day.


Next was the address by the Chief Guest Rtr. Thilan Anuradha who is a Past President of the club. He expressed his gratitude for inviting him as the Chief Guest for the evening. He carried out an effective discussion on “Make your Mark” which is about being successful in life. He mentioned that the good qualities a winner has is always a great advantage for him/her. He discussed how confidence, honesty, and creativity help each and every one in their day to day life. He concluded his discussion by showing how a person should enrich their life with such qualities and succeed.

The installation ceremony was then concluded with felicitations and the vote of thanks followed by the national anthem.


The Rotaract Club of University of Colombo Faculty of Management & Finance wishes the new President Rtr. Yeheshan De Silva and his board every success to prosper with their upcoming projects.