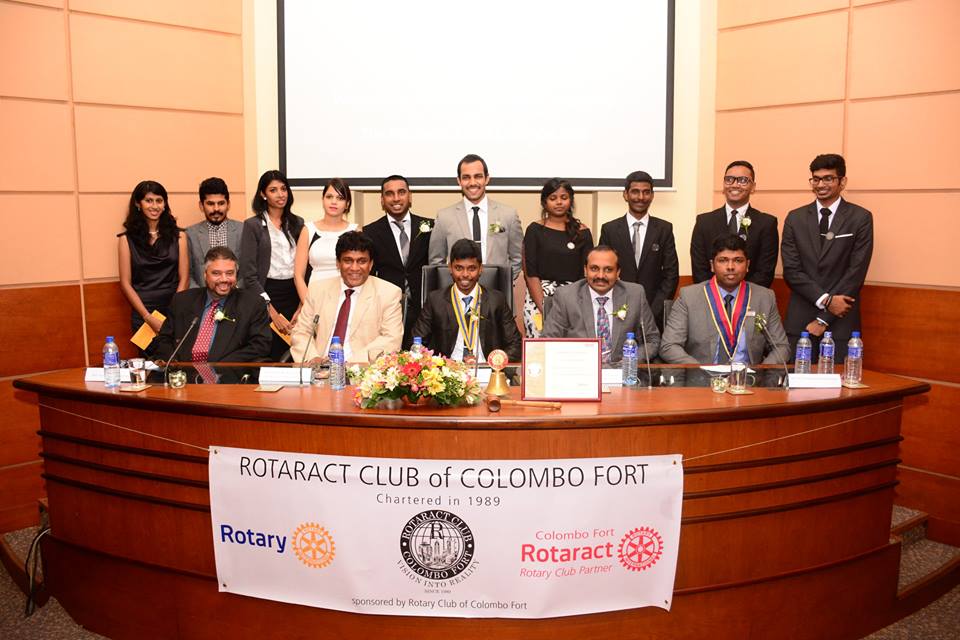 Posted at 10:26h in Installations, Others, Uncategorized by rcuocfmfadmin 0 Comments
The 26th Installation Ceremony for inducting the Incoming President Rtr. Sivapragasam Divaharan and his board of directors of the Rotaract Club of Colombo Fort was held on the 30th of September 2015 at the Institute of Policy Studies auditorium. On behalf of our club Rtr. Supun M. Walpola, Rtr. Indunil Ittapana, Rtr. Umanga Kariyawasam and Rtr. Merlisha Lodewyke attended the ceremony.


The event commenced with the lighting of the traditional oil lamp by the dignitaries at the head table followed by the Rotaract Invocation, Flag Salutation, 4 Way Test and the Rotaract Anthem.
The dignitaries for the evening were;

After the house was called to order, the welcome address was delivered by Rtr. Srimayuran Selvaraj and the Outgoing Secretary Rtr. Nuzri Munsoor presented the Secretary’s Report as a video clip including the photographs of the projects that were carried out during the past year. Some of the key projects undertaken by the club are as follows;

Next the Incoming President addressed the gathering and thanked the club for bringing him to this position. He then introduced the Board of Directors for the year 2015/2016.

Next the District Rotaract Representative Rtr. PHF Sathiyeandra Tharmakulerajasingam addressed the gathering and stated that “The best way to predict the future is to create it”. He emphasized on the massive responsibilities of a Rotaract President. Another important thing that he mentioned was that Sri Lanka has reached the 2nd level of Donors and that we are just next to USA. He stated in his speech that Rotaract is a well-structured organization and it is important to be part of it as it helps us to make friends, serve the society and develop leadership.


The District Rotaract Committee Chair Rtn. Saifuddin Adamaly addressed the gathering and appreciated the work done by the club during the past year. The Colombo Quiz, Hat-trick and Blood drive projects were emphasized in his speech and he invited all Rotaractors to serve the community, develop themselves and go forward. Finally he congratulated the Outgoing President and his board for a job well done and wished the Incoming President and his board all the very best for a successful year ahead.


Next through a short a video clip the theme for the year 2015/2016, “Enlight Rotaract” was introduced.

After a brief introduction, the Guest of Honor – Rtn. Sasikumaran Muthuramar, President of the Rotary Club of Colombo Fort, addressed the gathering. In his speech he emphasized the importance and validity of the 4 Way Test and he invited all Rotaractors to apply it in personal as well as work life. He appreciated the club for the work done and wished the Incoming President and his board.


A brief introduction to the Chief Guest, Mr. Mano Ganesan, Minister of National Dialogue was given and he was invited to address the gathering. In his speech Mr. Mano Ganesan stated that he was so proud and happy to participate in this event. He stated that he was listening to the Rotaract song and it was so interesting. He mentioned some of the responsibilities of his ministry and invited the club to be a part of this process. He emphasized on the importance of the civil society in developing the nation. Before ending his speech he congratulated the Incoming President and he once again said that he is privileged to join the ceremony and invited the club to join hands with the ministry to develop the nation.

Then the floor was the open for Felicitations, which was followed by the vote of thanks and the National Anthem concluding the 26th Installation ceremony of the Rotaract Club of Colombo Fort.
The Rotaract Club of University of Colombo, Faculty of Management & Finance wishes all the very best for the newly appointed President Rtr. Sivapragasam Divaharan and his Board for a successful year ahead.