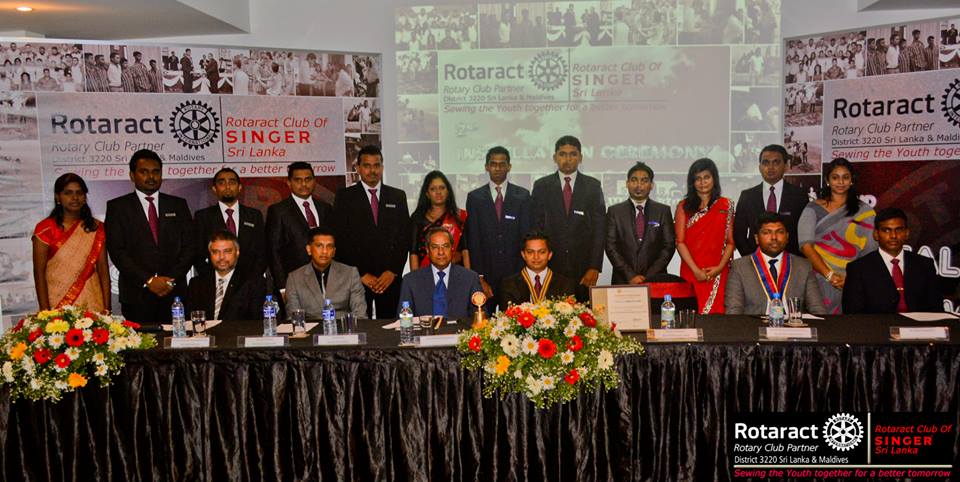 Posted at 19:43h in Installations, Others, Uncategorized by rcuocfmfadmin 0 Comments
The second installation ceremony of the world’s first ever Corporate Rotaract club, the Rotaract Club of Singer Sri Lanka, was held on the 17th of September at the Singer Sri Lanka Head Office. On behalf of our club Rtr. Chaturika Wijerathne, Rtr. Nishadi Mendis, Rtr. Koshini Cooray, Rtr. Melisha Lodewyke and Rtr. Aqeela Najeeb attended the ceremony.


The event commenced with the arrival of the Chief Guest and other dignitaries. The Chief Guest for the evening was Rtn. Indrakumar Goonathilake, the President of the Rotary Club of Colombo North. The Guest of Honor was Rtn. PP. Asoka Peiris, the CEO of Singer Sri Lanka and the other dignitaries were Rtn. P.P. Saifu Adamaly, District Rotaract Committee Chair 2015/2016, Roshan Mahanama, former Sri Lankan cricketer and the DRR Rtr. PP. PHF. Sathiyeandra Tharmakulerajasingam.
Following the lighting of the Floating candles, flag salutation, Rotaract invocation and the Rotaract song the house was called to order.


Rtr. Kasun Udayanga welcomed all those who were present for the evening which was followed by the Secretary’s report for the year 2014/2015 presented by Rtr. Dinushi where she mentioned about several successful projects including “Walk with a hero”, “beach cleanup” and revamping the computer lab of a school in Kanthale, along with a video clip including photographs taken during various projects initiated by the club for the year 2014/2015.


Next the Outgoing President Rtr. Mahima Weerasinghe addressed the gathering, where he mentioned about the ups and downs the club had gone through as the first ever corporate club in the world and how thankful he was for the support extended by everyone at Singer Sri Lanka. He also thanked all the club members for their tireless effort in achieving greater heights for the club. He then collared the Incoming President Rtr. Kalpa Hangawaththe with a brief introduction and officially handed over all the duties and responsibilities of the post.


With the collaring of the new President the Board for the year 2015/2016 was inducted. The Board members are as follows;

It was indeed a very exciting day for all the cricket fans to see the former cricket legend Mr. Roshan Mahanama address the gathering. In his short speech he emphasized on the fact that trust, integrity and values should be put forth before money and wealth.  This was followed up by a question and answer session where the audience had the opportunity to interact with the former cricketer.


The CEO of Singer Sri Lanka Rtn. PP. Asoka Peiris, in his address stated that Rotaract is a platform to inculcate the value of community service and is a great means of connecting with the community. He also said that he was indeed proud of the club and wished good luck to the Incoming President to keep up with the good work.

The DRR Rtr. PP. PHF. Sathiyeandra Tharmakulerajasingam stated that the Rotaract Club of Singer Sri Lanka has set an example to the whole world as the first corporate Rotaract Club and he also mentioned how supportive the club had been in collecting aid for the victims of the earthquake in Nepal. He also pointed out that it is our duty as Rotaractors to change the world.  Rtn. PP. Saifu Adamaly gave an introduction to Rotaract and what Rotaract is all about. He also stressed on the fact that as Rotaractors we should take up the opportunities around us and get the maximum out of them. He extended his wishes to both the Outgoing and the Incoming Presidents of the club.


On behalf of all the Rotaract clubs present Rtr. Punith congratulated the Outgoing President and his board for the good work done last year and wished good luck for the Incoming President and his Board. The ceremony concluded with the vote of thanks followed by the national anthem and the house was called to order for refreshments and fellowship.

The Rotaract Club of the University of Colombo, Faculty of Management & Finance wishes the Incoming President Rtr. Kalpa Hangawaththe and his board all the very best for a very successful year.