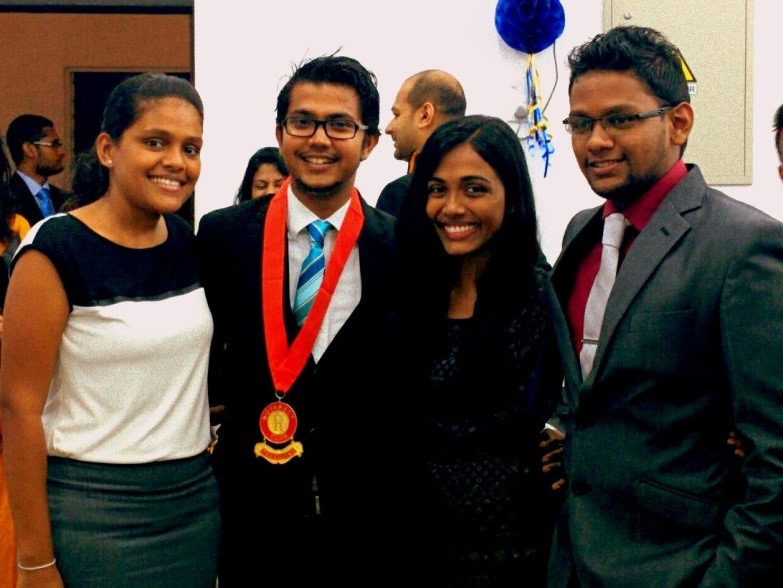 Posted at 08:45h in Installations, Others, Uncategorized by rcuocfmfadmin 0 Comments
The 2nd Installation Ceremony of the Rotaract Club of University Alumni, to induct the Incoming President Rtr. Asiri Herath, was held on the 27th of September at the Maths Auditorium, Faculty of Science, University of Colombo. On behalf of our club Rtr. Shanlini Wijewardena, Rtr. Kasun Mullegamgoda and Rtr. Madhumali Kodikara attended the event.To commence the proceedings under the theme of “Connect. Serve. Celebrate.”, the oil lamp was lit by the dignitaries present. Thereafter the following dignitaries took their seats at the head table,

along with Outgoing and Incoming presidents.


With the house called to order, flag salutation, Rotaract invocation, the four way test and the Rotaract song were recited. After the welcome address, the Secretary’s Report for the year 2014/15 was presented by Rtr. Poorni Batuwatte. The projects included:

The Outgoing President, Rtr. Sudaraka Arthanayake, addressed the gathering mentioning his experience as the charter President of the Club, and expressed his gratitude to the outgoing board and the parent Club, Rotary club of Colombo Metropolitan. He also highlighted that charter of a club is not difficult but existence and sustainability is. Thereby, he wished the upcoming President the very best for overtaking the continuity of the club. Finally he mentioned that it’s their duty as the youth and past pupils of state universities to support the reconciliation of Sri Lanka.


The Vice President then introduced the Incoming President Rtr. Asiri Herath, supported by a video. The President was then collared by the Outgoing President. Thereafter the President addressed the gathering to mention that this club was chartered to ensure that students of state universities who leave Rotaract are gathered back for service to the society. He continued to mention about the high calibre and quality of members who join the Rotaract Club of University Alumni. He concluded by mentioning the importance of team work.


The President’s address was followed by the induction of the Incoming Board for the year 2015/16. The board is as follows:

The District Rotaract Representative, Rtr. PHF. Sathiyeandra Tharmakulerajasingam, started his address quoting Winston Churchill, “courage is the first of human qualities because it’s the quality which guarantees all other”. He continued to mention that the District is happy to see two Alumni clubs within the past two years, and stated there are four different types of Rotaract Clubs, namely; institute based, community based, alumni and corporate. He seconded the Outgoing President’s saying, starting is easy but continuation requires courage. He commended the incoming board which includes five Past Presidents of Universities of Colombo, Jayawardenapura and Peradeniya. He reminded the members to ensure the work-life balance along with Rotaract, since they have recently started their professional career after graduating from state universities.


The Guest of Honour for the evening, DRCC Representative Rtn. PP. Sulochana Homer, addressed the gathering by mentioning that Rotaractors from institute clubs who leave Rotaract rarely comes back to Rotaract. Therefore she mentioned an Alumni club is a motivation for fresh graduates. She wished all the very best for the future endeavours of the club. Her address was followed by an entertainment item performed by two fellow Rotaractors.


The Keynote Speaker-Youth Services Chair Rtn. PHF. Farzana Khan, mentioned it is an immense pleasure to see an alumni Rotaract Club which represent state universities of Sri Lanka. She shared her experience as a Rotaractor and how Rotaract has moved the better now from the past. She added that the quality of membership has improved and is very different to what it was. Thereby she insisted on the continuation of that professionalism and calibre. She added that the most important is the friendship since life is a journey, and you learn from every individual you meet. She said University Alumni broadens the network of friends and the membership is of high calibre. She however, pointed out the importance of being focused on sustainability since members who join are new to the professional world as well. She added the importance of planning ahead the upcoming Presidents at least for two years to ensure sustainability. She reminded the Rotaractors to be a part of a Rotary Club once they leave Rotaract, based on convenience of attending meetings of the particular Rotary Club chosen.


The final address for the evening was by the Chief Guest President Rtn. PHF.  Rihan Ayamperuma, representing the parent Club, the Rotary Club of Colombo Metropolitan. He also commended the calibre and potential of members. He encouraged the Club to improve on the membership on a sustainable basis since the potential members are attracted from a gold-mine.  He also invited Rotaractors to be a part of Rotary once the Rotaract journey is concluded. He concluded by mentioning that they are looking forward to working with the Rotaract club of University Alumni in upcoming projects.


Tokens of appreciation were distributed to the dignitaries present and felicitations were expressed by attending Rotaract Clubs. To mark the end, the vote of thanks was proposed by the Secretary, Rtr. Samali Weliwatte.