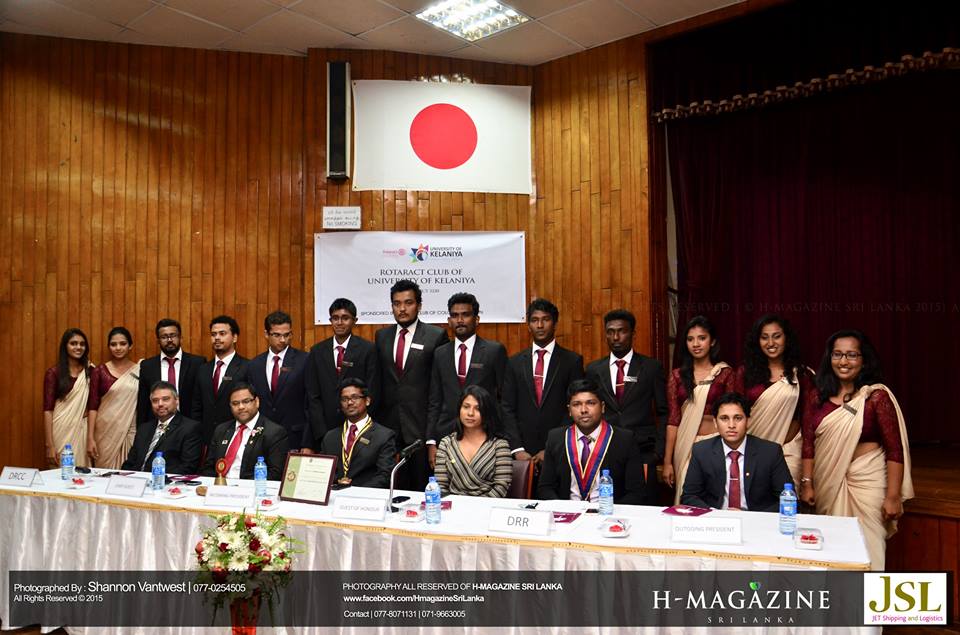 07 Oct “DREAM. SERVE. RELISH”- The 6th Installation Ceremony of the Rotaract Club of University of Kelaniya

Posted at 19:44h in Installations, Others, Uncategorized by rcuocfmfadmin 0 Comments
The 6th Installation Ceremony of the Rotaract club of University of Kelaniya was held on the 23rd of September 2015 at the Sasakawa Hall, Colombo. On behalf of our club Rtr. Kasun Mullegamgoda attended the event.


Starting up with the proceedings, the following dignitaries of the head table were warmly welcomed and requested to light up the traditional oil lamp-

The Welcome address was given by the joint installation chair Rtr. Yoshana Premaratne which was followed by the Secretary’s Report for the year 2014/2015 by Rtr. Erandi Kuruppuarachchi. It was presented as an interesting video clip including photographs of the events and moments they’ve treasured. The Rotaract Club of University of Kelaniya has been successful in completing some amazing projects. Some of their major projects were,

According to the agenda next up was the address by the Outgoing President Rtr. Tidi Abeysekara. In his speech, he mentioned about the ups and downs that his club had to go through during the past year and how his dynamic Board of Directors has been an immense support to him to make his year a success.


The introduction to the Incoming President was given by the Incoming Vice President of the club, Rtr. Achela Silva which was followed by a short Video clip about the President. Following this the Incoming President Rtr. Thilina Nimantha was collared. Then he was given the chance to address the gathering. In his speech he promised to lay a strong foundation for the club and direct the board members as well as the other members to witness an unforgettable year in their lives.

Following this the new board for the year 2015/2016 was inducted. The introduction given to the new board members was a very unique and interesting one.

The gathering was then addressed by the DRR PHF PP Rtr. Sathyeandra Tharmakulerajasingam. He thanked the Outgoing President Rtr. Tidi Abeysekara for having completed a wonderful year. He appreciated Rtr. Tidi Abeysekara’s efforts in bringing the club back on track and to make the club one of the rare and strong clubs.


The District Rotaract Committee Chair Rtn. PP. Saifuddin Adamaly congratulated the Outgoing president and also wished all the best for the new President Rtr. Thilina Nimantha and his board for another successful year stating that Rotary will always be by their side whenever they need any assistance.


After that the audience were entertained by a beautiful singing item, which was presented by the famous singer Sachith Peiris. He entertained everyone with an old school rock song by Guns and Roses and a Sinhala song mush up.

The Guest of Honor for the evening, the Youth Services Chair Rtn. PHF Farzana Khan, addressed the gathering while highlighting the fact that the Rotaract club of University of Kelaniya has been doing well so far and she also highlighted the advantages of being a part of a movement like Rotaract and the benefits one could achieve through it.


The Chief Guest for the evening Rtn. IPP. PHF Jegatheesan Pirrasanth firstly congratulated the Outgoing President Rtr. Tidi Abeysekara for completing a great year. He mentioned that this club is a unique club and wished Rtr. Thilina Nimantha and his board for another successful year.


The 6th Installation Ceremony came to an end with the felicitations, the vote of thanks which was given by the Secretary for the year 2015/2016 Rtr. Roshana Ali and the National Anthem. The House was then called to order for refreshments and Fellowship.


Hats off to a well-organized Installation Ceremony!
Greetings and well wishes from the Rotaract Club of University of Colombo Faculty of Management & Finance, for an amazing year ahead.