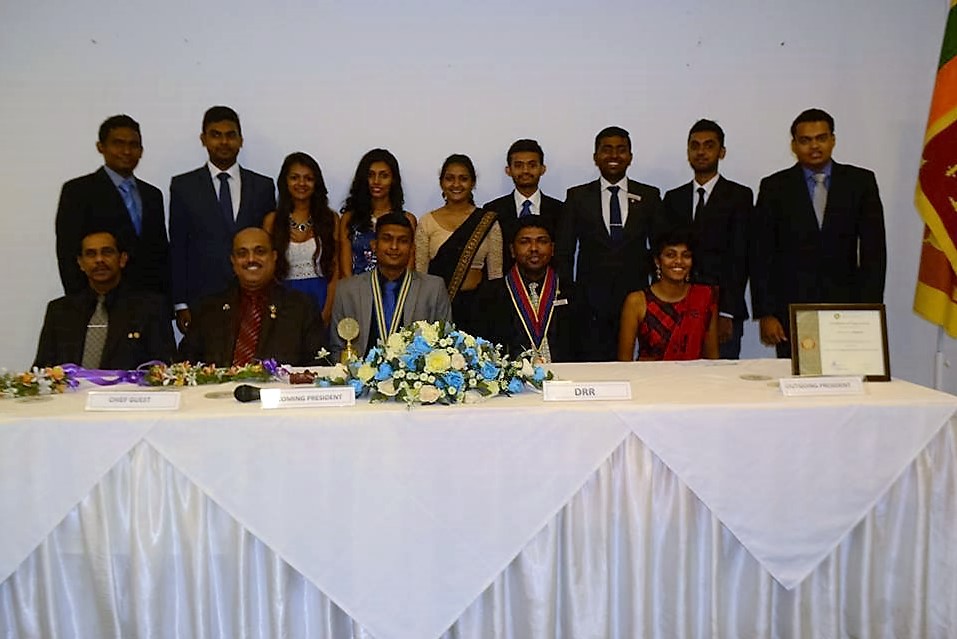 Posted at 10:47h in Installations, Others, Uncategorized by rcuocfmfadmin 0 Comments
The 4th Installation Ceremony of the Rotaract Club of Negombo was held on the 18th of October, 2015 at the Paradise Beach Hotel. On behalf of our club Rtr. Ruvindi de Silva, Rtr. Hiruni Perera and Rtr. Ruvini Perera attended the installation ceremony.


The evening began with the lighting of the traditional oil lamp, followed by the recitation of the flag salutation, Rotaract Invocation and the Four Way Test. Succeeding the Rotaract song, Rtr. Enon Croos gave the welcome address and then the Secretary’s Report for the year 2014/15 was presented by the Outgoing Secretary. He spoke of the club’s activities, including their joint activities with the Rotary Club of Negombo such as their joint meeting and the health camp project. They have also had a joint project with the Rotaract Clubs in Colombo and Kandy. He spoke of the success of their Beach Clean-up Project and their Cluster Project – Drug Free Sri Lanka.


Next, the Outgoing President, Rtr. Leyanvi Mirando, addressed the gathering. In her speech, Rtr. Leyanvi described her wonderful and exciting experience as the President. She also mentioned that the Rotaract Club of Negombo thrives on friendship and that this would become strength for the club and that it would continue to do well as a result. She also spoke of the importance of conducting projects that are sustainable and meaningful to the society. Further, she expressed her gratitude towards her club members, friends and family. At the end of her speech, she collared the Incoming President, Rtr. Dinith Fernando, succeeding which, the Incoming President gave his speech.

He began by thanking his club members, the Immediate Past President, family and his alma mater Maris Stella and then presented the theme for the year as “Work Hard, Dream Big”.  Rtr. Dinith spoke of the importance of being dedicated to the club and keeping it going. He also revealed his plan for a Polio eradication project. Subsequently, he went on to introduce the incoming board. The board of Directors for the Rotaract Club of Negombo for the year 2015/16 is as follows:

Consequently, the DRR PHF Rtr. Sathiyeandra Tharmakulerajasingam addressed the gathering. He recounted his first meeting with Rtr. Dinith and expressed his joy at Rtr. Dinith being the new president. He also showed his approval of the Polio project and went on to praise the Outgoing President for the projects she initiated and for raising the number of members of the club. He concluded by promising his support to the club in its future endeavours.


It was then the turn of the Key Note Speaker, Mohammed Fawaz, the GSEA Ambassador of Sri Lanka at the Entrepreneurs’ Organization, to address the gathering. He spoke about how community leadership comes from service organizations like Rotaract and expressed his approval for the theme of the year. He spoke about the meaning of success and how it means different things to different people and about the importance of following your passion.


The Chief Guest for the evening was the President of the Rotary Club of Negombo, Rtn. PHF Ajith Weerasinghe. In his speech he voiced his opinion that youngsters have the capability to work hard but they also need to work smart in order to reach their goals. He elaborated by expressing the importance of teamwork especially in service organizations. He was of the view that all members should be given the opportunity to show their abilities in order to motivate them.


With the conclusion of his speech, the house was opened for felicitations and following which, the new Secretary, Rtr. Michelle Croos gave the vote of thanks, thus bringing an end to the wonderful evening.