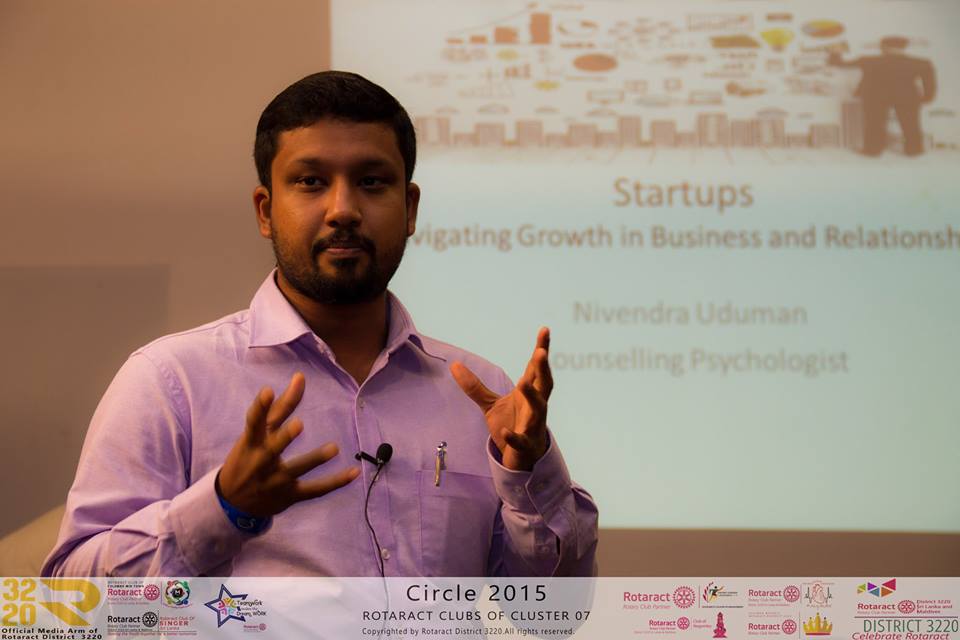 Posted at 10:40h in Avenues, Good Jobs and Economic Growth, Professional Development, SDGs, Uncategorized by rcuocfmfadmin 0 Comments
“Why out of the box, not out of the circle….”


With his presentations he went on explaining about personal Wealth management covering areas such as saving today while working, to spend during retirement. He explained that we need to be disciplined to have to invest a certain sum of money now without just spending the whole salary today on things. As planning he advised to first evaluate our current financial status, as if we are currently in debt, to clear that debt first. Then to plan our actions, as to deciding on our future goals and implementation of the plans and finally, review an assess the financial plan because the needs might change with time. He further advised to find the cost as how much we will need to buy a house or a car in 5 years time, taking inflation effect also to consideration. He pointed out that it is the figure we have to target to receive after 5 years and we should plan our investments accordingly


Then he went on to talk about a very important aspect, managing our debt. He explained that for not to fall in debt trouble, we need to manage our debt wisely. He gave a few points on concurring debt, such as, stop borrowing, using debit cards rather than credit cards, prioritize your debt payments, take loans with fixed interest rates and explained that before borrowing we should first decide on how much we can payout to finish it quickly as possible.


The Magic behind Photography
Then the next session was a very interesting one on finding the magic behind photography and creation of short videos. This was conducted by Mr. Taya Diaz who is the creator of Monkey Kingdom.


Throughout his session he explained about when you get behind the camera, what should be on the other side, or in his words, How to tell the story! According to him, even in a photograph, telling the story matters. He touched on the basic principles on how to take an ordinary photograph and make it better. Interestingly he said, just as painter draws with a brush, a photographer draws with light.

He talked in detail about the 3 ways in which we control the light to make something great without just using the auto option in the camera, they are, shutter speed, aperture and ISO. Finally he advised all the young photographers to drop the auto and use manual option which will give them the opportunity to be creative and to learn.


Start-ups
The next session in line was conducted by Mr. Nivendra Uduman who is a trained counselling psychologist and psychotherapist who is currently working as The Senior Technical Officer at Samutthana-the King’s College London Resource Center for Trauma, Displacement and Mental Health.


He also explained about times when communication blocks compassion, that is, sometimes we make mistakes in the way we communicate which will not let us to be compassionate about the other party and that will alienate us from the people and we may lose relationships we value. He explained that, a business or a start-up, without compassion is a recipe for disaster. Finally he made a very valid point saying that we can be ruthless as much but that ruthlessness will not take us far, what takes us far is our value system.

He pointed out that underlying all of these are our needs that are not met. When needs are not met we begin to communicate in a way that blocks us from being compassion. Relating to the main discussion; start-ups, he explained that needs and expectations play a major role in how we feel, and  feelings have an impact on interactions. Most importantly in a start-up since it’s a raw idea that needs to be developed with the help of other people.


He talked greatly about our feelings and pointed out with examples that identifying and understanding our needs and requesting for them rather than keeping them locked up inside is very important and talked about linking feelings with our needs. He got the audience to speak up about the common feelings we feel making the session more interactive and more Interesting.


Then making his session even more interesting, he invited 5 volunteers up to play a game. He called the Game as “Star Game” and volunteers were given a string and were asked to work together and make a star. The team took much time and after few failures finally was able to come up with a star.

Then he started discussing about what we can learn from that. Got the audience to speak about it and many valid points were made. But especially he asked the audience whether we noticed something unusual happening while the team was struggling to come up with the star. One lady answered saying that she noticed one person continuously letting go of the string making the job more difficult for the others. To everyone’s surprise he applauded that comment and said that the gentleman was previously instructed to mess up the team’s work. Then he asked the audience about what we can learn from that and pointed out that no matter how good everybody else is, one wrong person or someone little different can hinder the growth of the whole team. Then he said that everywhere we find some people who are different than others. Mainly when we have someone in our workplace, we should learn how to identify those people for who they are and their strengths to draw that person out to optimally function rather than isolating him. He then concluded his session with an interesting story.

The workshop was then concluded after the vote of thanks by our club member Rtr. Miroshika Fernandopulle.