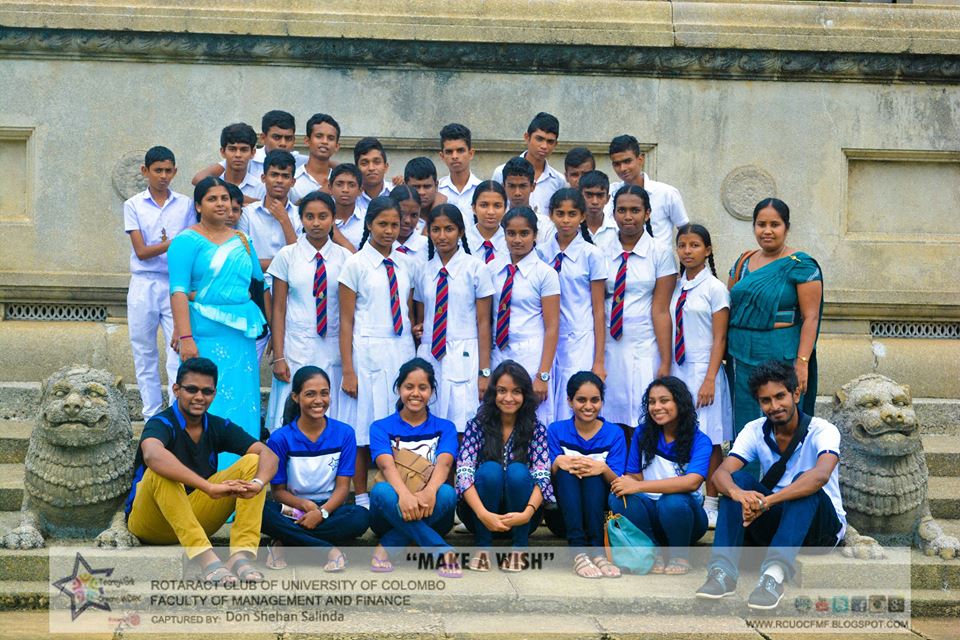 Project ‘Make a Wish’, the official Christmas project organized by the Rotaract Club of University of Colombo, Faculty of Management and Finance was successfully completed on the 27th of November 2015. The project which was held for the second consecutive time was done on a much bigger and better scale this time around.


The project’s main objective was to give an opportunity for the less privileged children to experience the joys of Christmas.
This time around, in consistent with our main focus on delivering long term benefits, the project was carried out to emphasize the significance of education and learning, to a group of 25 A/L students of the ‘Katuwana Pelana Central College, Hatharaliyadda’ and to motivate them to achieve their future goals.

The aim of this project was to organize a day tour around the university premises and few other places of interest around Colombo to these students who have never visited Colombo.
The day started off with the arrival of the students all clad in white school uniforms accompanied by two teachers who were warmly welcomed by our fellow Rotaractors.


Their first experience was the Planetarium show. This created the ideal platform to open up their minds to the wider universe, to encourage them to dream big, to believe that ‘the sky is not the limit’. This would have truly given them a new experience as we saw their eyes sparkle and watch with intent during the course of the show.

Next in line was the serving of a small snack with refreshments followed by an interactive session. The interactive session was conducted by Rtr. Madhumali Kodikara (Director of International Understanding) who emphasized the need for education. Later each student was given the opportunity to introduce themselves, express their interests and interact with the fellow club members.


Next was the tour around the university premises. The students were shown around the management, arts and law faculties of University of Colombo respectively with a brief history of each.  In speaking to the students, they said that this first hand experience certainly created a lasting memory and motivation to study.


Afterwards we proceeded on to the city tour. Our first stop was at Viharamahadevi Park where we had our lunch while admiring the nature.


As we advanced on to our tour in the bus to the sound of music and laughter of the students, they were shown the edifices of the National Museum, Nelum Pokuna and Arcade. Rtr. Kasun Mullegamgoda (Co-Director – Green Life) was appointed as the tour guide for both the university and city tours. We stopped at Independence Square and provided them access to the small museum there in order to make them aware of the rich history of Sri Lanka.

Our final destination was at Galle Face, which was the highlight of the event. Seeing their radiant smiles and the care free thrill at the beach to the gushing of waves was the most rewarding moment for our club members.


The project ended off in the serene sun set with the offering of refreshments and distribution of gift packs to each student. The students mentioned that it was truly a wonderful experience which inspired them to study well and come to a university one day.

We as Rotaractors were glad to live out the true spirit of Christmas and to go that extra mile to demonstrate simple acts of love and care. Our only wish is that this project may help and motivate the 25 students to realize their wishes one day.


Hats off to the project co-chairs Rtr. Ruvini Perera and Rtr. Ranithri Samarawickrama who were able to pull off a successful project following the streak of successes we had last year and end the year on a high.