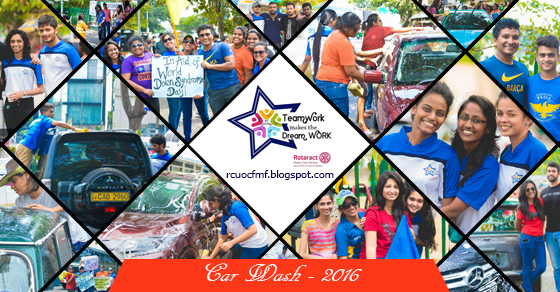 Posted at 04:11h in Avenues, Finance, Uncategorized by rcuocfmfadmin 0 Comments

The annual car wash organized by the Rotaract Club of University of Colombo, Faculty of Management and Finance was held on the 30th of January in front of the BRC grounds from 9 a.m. – 4.30 pm. It was a fund raising project done in aid of the World Down Syndrome Day celebrations to be held in March.  This was mainly organized by the second year Rotaractors of the club. As a value addition for the car wash, a food stall was opened for people to treat their taste buds with yummy hot dogs, iced coffee and ice cream.


The day started off with our fellow Rotaractors gathering in front of the BRC grounds to do the necessary preparations such as filling the water tanks, doing the decorations in order to make the surrounding colourful as well as arranging the place for the food stall which was another part of the car wash. Members in charge of the food stall started off their work by putting up the grill to make hot dogs and making the stall presentable while rest of the members helped out with the other activities of the car wash.


It didn’t take a long time to grab the attention of the drivers passing by to stop their vehicles for a wash. First car arrived increasing the excitement of all of us and it was the start of washing closer to 30 cars which was way beyond our expectations. Members had to be more efficient when there were about 5 vehicles in the queue to get washed. Members had been allocated for different tasks and they took turns in order to perform them, where some helped out with washing the cars and with the food stall. Some helped out with getting the attention of the vehicles passing by, carrying flags and boards while some others interacted with the people who came in vehicles, describing the purpose of the car wash.

This car wash was not merely a fund raising event, but was an event with fun and interaction among the fellow Rotaractors as there were a lot of members from the senior batches who helped us out throughout the car wash, even by washing the vehicles along with us. Our members surely know how to have fun while carrying out a project where into the latter part of the car wash people started throwing water at each other and making it a memorable car wash to the co-chairs and also for the President of the club.


The car wash came to an end after washing some vehicles of fellow club members and cleaning the premises. Everyone who participated went home with a huge smile on their faces.  Everyone was satisfied because all their hard work finally paid off and were happy about getting a chance to dedicate their time and effort for a worthy cause.