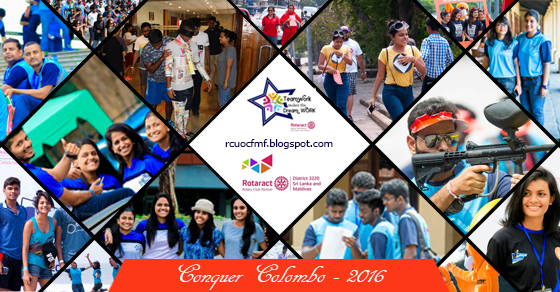 Posted at 09:11h in External Club Events, Others, Uncategorized by rcuocfmfadmin 0 Comments

On the 7th February, in front of the Nelum Pokuna Mahinda Rajapakse Theatre it was a very unusual sight, and for a random person who is passing by it would have built up so much curiosity because it was filled with so many individuals in different costumes getting ready for the biggest scavenger hunt in the history of Rotaract to hit the streets of Colombo.


Conquer Colombo, organized by the Rotaract Club of Achievers Lanka Business School along with the Rotaract District 3220 was held on the 7th February 2016 for the third time with a participation of more than 200 teams each comprising of four members. Conquer Colombo was a scavenger hunt, which included a wide range of activities to be carried out across Colombo.

All teams were presented with a set of clues which were required to be solved in order to find their destination. Locations included places of religious value such as the Gangaramaya Temple, historical significance such as the Independence Square and social hotspots including shopping malls. The teams were required to take a picture, video or complete a task. Points were allocated for tasks and the winners were crowned based on the points. All 4 members of the winning team walked away with four return tickets to Kuala Lumpur and thousands worth of cash and vouchers were awarded to the runners up.


Conquer Colombo 2016 was organized to raise funds for the biggest community service project of the Rotaract Club of Achievers Lanka Business School, Project “Christmas Smiles”, that has been happening for four consecutive years.

We witnessed the enthusiasm of the teams from the beginning to the very last moment of the day. Not only did we witness, but we also had the opportunity to experience it on our own. As a result, we were able to create so many memories as we moved along completing challenges one by one. The teams were separated into 3 colours as Red, Green and Blue, each consisting of its own set of challenges to complete. These challenges varied from photos that were to be captured at different locations and of different things, videos which required the interaction with the public and loads of fun physical challenges. The most intriguing element was the way how most of the challenges were presented encrypted in riddles. Figuring out where the challenge is to take place therefore was transformed into something extremely exciting.


Some of the best challenges introduced this year consisted of the paint balling challenge, the spices challenge and the hot dog challenge at Cioconut. The challenge in the car part in Nawam Mawatha brought in a whole different aspect to the entire hunt as it had a full display of Italian cars ranging from Lamborghinis, Ferraris, Alpha Romeos and many more magnificent models.

This 5 hour scavenger hunt ensured that challenges were spread out all across Colombo and ensured that all participants use their physical, mental and of course driving skills to their maximum.


Another major aspect was the use of interaction with the public to complete some of the challenges such as singing a song to a complete stranger, getting a security officer to sing a song and finding an individual who is 50 years old from the streets. Most of these challenges were very easy for the teams because of the enthusiasm and the energy they had throughout the competition.


The mascot for the event, Buzzbird was another memorable part of Conquer Colombo 2016. The buzzie dance performed by the Buzzbirds together with all the contestants just before the start of the scavenger hunt created electrifying energy across the theatre and gave all the contestants the boost they needed to get ready to start running.

Three teams from our club, the Rotaract Club of University of Colombo Faculty of Management & Finance, took part in Conquer Colombo 2016, and Team FMF comprising of Rtr. Praveen Fernando (President), Rtr. Madhumali Kodikara, Rtr. Mirangi Lanka Prasada and Rtr. Gehanya Gamage walked away as the winners of Conquer Colombo 2016 and were awarded with return tickets to Kuala Lumpur. The second and the third places were won by team Seeni Balls and team #TheMuffinStuffers respectively. 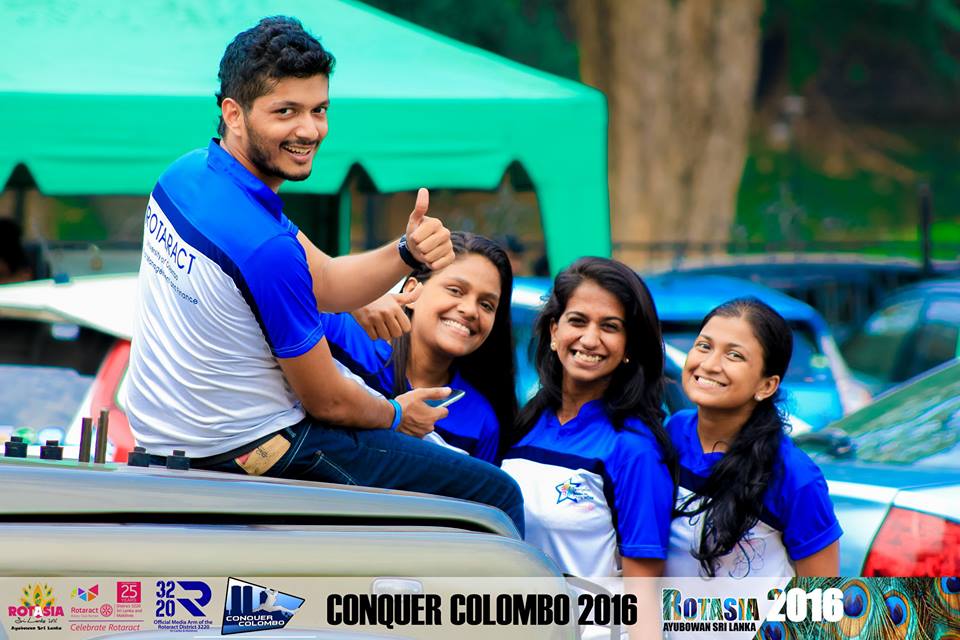 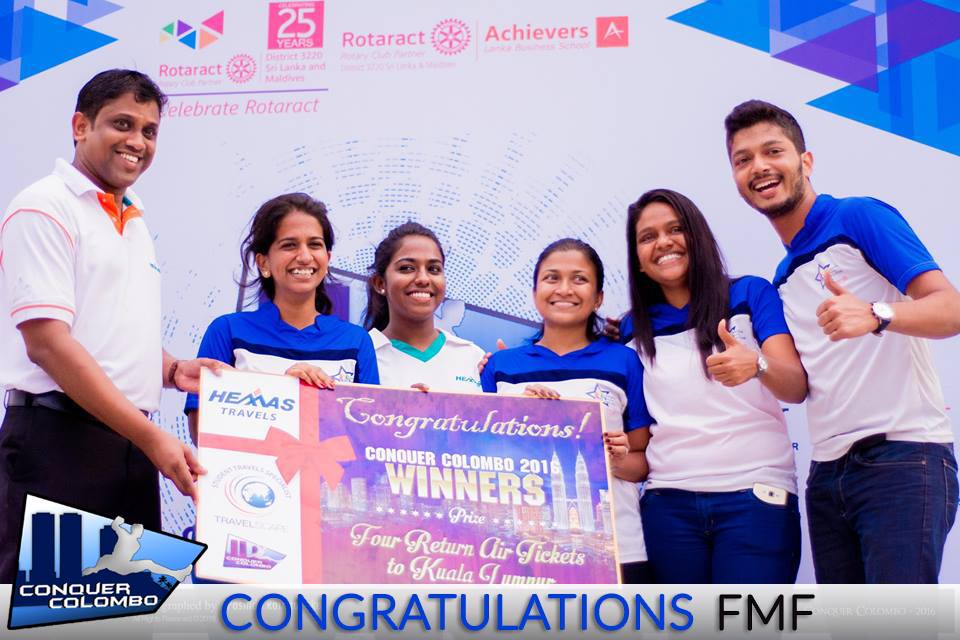 It also featured special categories of awards such as ‘Funkiest Ride’ won by The Sync, ‘Wonder Women’ won by team Victorious Secrets, ‘Best Themed Team’ won by team Road Busters, ‘IIHE Award’ won by The MufferJackers and the ‘Buzzbird Challenge’ won by Clan 140.


Conquer Colombo for Rotasia
Conquer Colombo 2016 was an integral component of Rotasia 2016 which saw the participation of over 500 foreign delegates. The Rotaract Club of Achievers Lanka Business School succeeded in tailoring its challenges for the Rotasia participants in such a way that it allowed them to visit the monuments around the city of Colombo and truly experience Colombo in just a matter of hours whilst being part of an exhilarating run for victory. They were also awarded separately under the categories of ‘Most Outstanding Team/Best performance’ and ‘Overall Winner-Rotasia Category’, at the closing ceremony of Roatasia 2016.

At the end of ‘Conquer Colombo 2016’ one thing was quite evident, every individual left the premises with so many memories and an unforgettable experience which they would have not got from anywhere else and those memories outweighed all the awards and cash prizes.