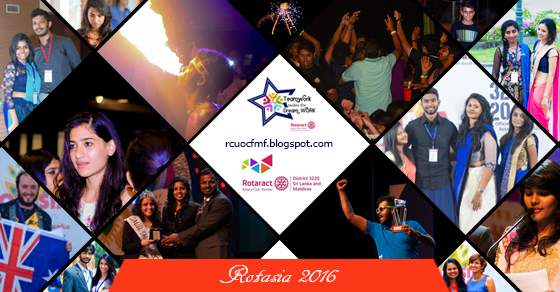 Posted at 09:49h in District Events, Others, Uncategorized by rcuocfmfadmin 0 Comments

Rotasia 2016 – Ayubowan Sri Lanka, was proudly hosted in Sri Lanka by the Rotaract District 3220, achieving a major milestone in the history of Rotaract Sri Lanka. Rotasia has been held for the past 16 years in countries such as Nepal, India and Bangladesh, mainly focusing on Rotaractors and Rotaract Clubs in the southern region of Asia. It was indeed a great privilege for us to host the conference in Sri Lanka for the first time ever.


Customarily the conference extends up to three to four days, providing an opportunity for Rotaractors to come together on an international platform, to exchange ideas and enhance their bonds in Rotaract. Some of the main objectives supporting the organization of this annual conference are to increase the bond between Rotary and Rotaract, discussion of Rotary and Rotaract related matters, enhancing fellowship among Rotaractors, creation of a common forum for Rotaractors to meet each other and exchange information etc.


Rotasia Sri Lanka 2016 was held between the days of 5th February to the 8th February 2016, and it provided us Rotaractors from the District 3220, an international experience at the comfort of our own motherland. The opening ceremony of the conference took place on the 5th of February, at Nelum Pokuna (Lotus Pond) – Mahinda Rajapakse Theatre, with the participation of over 600 international delegates.

The proceedings of the Opening Ceremony began with the arrival of the chief guest and the respective dignitaries. Following the traditional lighting of the oil lamp, the chairperson of Rotasia 2016, Rtn. Muthiah Prabagaran called the conference to order. The Pooja dance, the curtain raiser for the evening, left the audience in awe offering them a glimpse of the rich culture in Sri Lanka.


The theme of ‘be a gift to the world’ was presented by means of a beautiful song composed by the Rotaractors of our very own District. Thereafter the agenda for the conference was presented by Rtn. Muthiah Prabagaran, which paved way to another item of entertainment. Yet again, the audience were very thoroughly captivated by the voices of Ryan Henderlin and Rozanne De Zoysa.


The audience was then addressed by the District Governor Rtn. George Jesuthasan, who also welcomed all the delegates to Sri Lanka and wished the organizers the very best of luck for a successful conference. Bringing the proceedings for the evening to an end, the closing remarks and the vote of thanks was delivered by the DRR of District 3220, PHF Rtr. Sathyeandra Tharamakulerajasingham.


The second day of Rotasia Sri Lanka began bright and early on the 6th of February, a Saturday at Trace Expert City Maradana. The second day of the conference was the ‘business day’ where the participants had the opportunity of attending sessions on business understanding, conducted by very famous personalities in the corporate sector of Sri Lanka. The sessions were mainly conducted under the topics of Rotary & Youth and Social entrepreneurship. The participants were given the opportunity of attending one of the two sessions chosen according to their preference. The sessions for the day were conducted by Dr. Amanda Kiessel, Mr. Kushil Gunasekera, Mr. Oliver L. Alvarez and Mr. Sanjana Hattotuwa.

Parallel sessions were held for the first round of Mr. & Miss Rotasia 2016 during the day. The first half of the second day was concluded preparing the participants for the cultural night to be held at Viharamahadevi Open Theater. The cultural night was a fun filled evening for all the participants, allowing everyone to relax and enjoy after the busy schedule of the day’s proceedings. The highlights of the evening were the final two rounds of Mr. and Miss Rotasia, District Presentations and also the recognition of District Rotaract Representatives.

7th February, the third day of Rotasia 2016 compromised of Conquer Colombo, a scavenger hunt organized around the Colombo city, by the Rotaract District 3220 and the Rotaract Club of Achievers Lanka Business School. Read our blog post on Conquer Colombo 2016

The action packed day was brought to an end by a beach party held at Shore by O. The beach party gained much popularity among all the participants making it one of the most loved and enjoyed events of Rotasia 2016.

As the old saying goes, all good things must come to an end. The closing ceremony of Rotasia 2016 – Ayubowan Sri Lanka, was held at Nelum Pokuna (Lotus Pond) – Mahinda Rajapakse Theatre on the 8th February, 2016. The proceedings of the ceremony began with the arrival of the key dignitaries.


Following the cultural entertainment act, the project chairperson Rtn. Muthiah Prabagaran delivered the opening remarks, which was followed by a presentation;  a recap of the past three days of the conference.


With Rotasia 2016 coming to a close the baton was passed to the Rotaract District 3080 who will be hosting Rotasia 2017 in Chandigarh, India. The DRR, PHF Rtr. Sathyeandra Tharamakulerajasingham presented the closing remarks and officially concluded Rotasia 2016 – Ayubowan Sri Lanka.

It was indeed a great privilege to have been a part of this wonderful experience and the Rotaract Club of Faculty of Management & Finance, University of Colombo would like to congratulate the Rotaract District 3220 on a job very well done in successfully hosting Rotasia 2016.