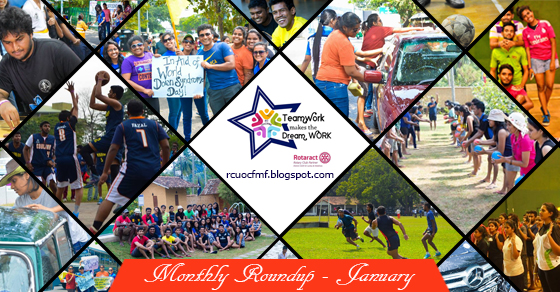 Posted at 07:55h in Round Ups, Uncategorized by rcuocfmfadmin 0 Comments

Club Trip
The annual Rotaract trip of our club was held during the month at the Ocean Ripples Resort. It was a fun filled trip which saw the participation of around 40 members of the club. The activities and games that were organized provided the opportunity for the members to bond together and also provided the opportunity for the new members to get to know the other members of the club.


Thanks to the efforts of the Club Service Directors and Project Chairs Rtr. Mirangi Lanka Prasada and Rtr. Jude Fonseka, for making the club trip one of the most memorable experiences to all the members that participated.

District Committee Meeting – January
The District Committee Meeting for the month of January was hosted by our club in partnership with the Rotaract Club of Colombo Mid-Town. It was held on the 24th of January at the Police Families Welfare Association. The DCM which is a gathering of the Rotaract District members as well as all the Presidents of the Rotaract Clubs in the District, which focuses on discussing activities of the previous month as well as to discuss regarding the plans for the rest of the year. The DCM for the month of January was key as it was the last DCM before the highly anticipated Rotasia 2016.


Clothing Drive
The distribution of clothes collected through the project Clothing Drive happened during the month. On the 13th of January the clothes were donated to The Haven – a Salvation Army home for girls, which houses around 60 girls between the ages of 6 and 18. Clothes were also distributed among few of the workers in the University. The project was chaired by Rtr. Ranisha Fernando and Rtr. Kushlani Keppetipola.


Car Wash 2016
The annual Car Wash of our club was held on the 30th of January at the BRC Grounds. The Car Wash which is organized by our club each and every year, is one of the most anticipated events as it is the very first project that is organized by the first year club members. The Car Wash this year is arguably the best car wash organized by our club and we managed to collect more than what we targeted to achieve. The funds of the Car Wash will be used to contribute towards the World Down Syndrome Day which will be held in March. The project was chaired by Rtr. Akhila Wijetunga and Rtr. Manahari Singarchchi.