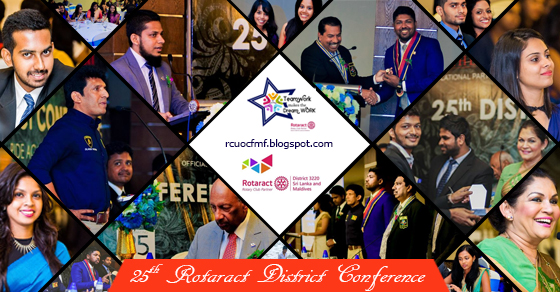 03 May 25th Rotaract District Conference- Ride Against The Tide

Posted at 02:42h in District Events, Others, Uncategorized by rcuocfmfadmin 0 Comments

The Rotaract District Conference, which is one of the most important events in the Rotaract calendar, was held on the 9th of April, at Grand Monarch Hotel with the participation of more than 200 enthusiastic Rotaractors.  This year’s conference was even more special as it marked the Silver Jubilee of the Rotaract movement in Sri Lanka. The event provided the participants an opportunity to network with fellow Rotaractors, listen to inspirational speeches by the key note speakers and to reflect back on the success of year 2015/16.


This mega event, organized by the RI District 3220, was hosted by the Rotaract Clubs of Colombo Millennium City, American National College, University of Moratuwa and Panadura. Their effort was much appreciated by many participants as it was well organized and meticulously executed from the start to finish.


The session kicked off with the registration of participants, along with a small treat for breakfast, which provided the participants an opportunity to bond with other Rotaractors. Afterwards, the participants gathered inside the hall with much enthusiasm and awaited the arrival of the distinguished guests, who were ushered in, amidst the sounds of the Kandyan drums and dancers. The proceedings started with the lighting of the traditional oil lamp by the dignitaries, followed by the Rotaract pledge, invocation and the Rotaract song.

The first session of the event was called to order by the DRR Rtr. PHF Sathiyeandra Tharmakulerajasingham. After the curtain raiser, which was a short video, the gathering was welcomed warmly by the Joint District PD Director Rtr. IPP Ridwan Shariffdeen. His address enlightened the audience about the proceedings of the day and the events they were to look forward to. Next, was the address by the DRR Rtr. PHF Sathiyeandra Tharmakulerajasingham. His speech reflected upon the many activities the Rotaract clubs have done in the past year of 2015/16 and he emphasized on the fact that whatever Rotaract has achieved so far was a result of team work and effort. He also introduced the DRR Elect Rtr. Mohammed Husni and the DRR Nominee Rtr. PP Anuradha Senanayake and wished them luck for even more successful years ahead.


Next on the agenda was an exciting event, which was the launch of the Rotaract membership card and this was followed by a short address by the DRCC Rtn. Saif Ramzi. His speech mainly focused on the goals of Rotaract and it was very thought provoking.  Then came the most awaited moment of the first session; the address by the racing legend, Mr. Dilantha Malagamuwa. His speech ‘Journey towards Stardom’ was indeed an emotional and inspiring one, which would surely drive many Rotaractors who were present to achieve great things in life.


The panel discussion moderated by ADRR Rtr. Charindra Chandrasekara was an interesting item on the agenda. The participants were allowed to ask any queries they have regarding the past year and the coming years from the District Committee. The issue of less zonal engagement of the Rotaract clubs and the issue of coordinating events due to the large number of clubs were brought forward from the audience and were discussed by the Board.

This was followed by the address of the District Governor Rtn. George Jesuthasan who emphasized on the importance of continuous learning and improvement and never giving up. Also, he went on to present DRR Shakthi a memento at the end of his speech.


Another fruitful item on the agenda was the group discussion that was moderated by the District Officers. The participants were asked to discuss about the issues they face in implementing projects and to provide suggestions to improve the future endeavors of the movement. Some of the suggestions that were presented after the discussion included creating solutions through other solutions, the need for Rotaractors to build a rapport with the Rotarians and the Interactors, establishing an online forum to communicate about the upcoming Rotaract events and focusing more on professional development. With this, the first session of the conference was adjourned for lunch and fellowship.


The second session commenced with the ceremonial procession ushering in the distinguished guests; followed by the lighting of the traditional oil lamp, Rotaract pledge, invocation and the Rotaract song. The gathering was welcomed by the Joint District PD Director, Rtr. IPP Romanthi Anandappa. The speech given by the DRR Elect Rtr. Mohammed Husni was one everyone paid much attention to with a lot of interest as it gave the participants an insight of the plans for the year ahead.

Next on the agenda was an act by the ever so funny, standup comedian Shuhaib Ali. The jokes he performed were interesting and hilarious and he managed to get the entire audience roaring in laughter for about good 5-10 minutes. Then came the most significant item of the second session; the address by Honorable Member of Parliament Rosy Senanayake. Her speech on ‘The power of activism’ enlightened the audience on how ordinary people can make a change in the world for the better. She also spoke about women empowerment and equal rights for women, which undoubtedly inspired the many young women who were present in the audience to stand up against discrimination and inequality.


The Awards ceremony was one of the most awaited events of the evening. Awards were presented to recognize service programs, projects and the public relation achievements in the District to commend the performance of outstanding Rotaractors and to inspire other Rotaractors to become more involved in the organization and work harder on projects.

The address by the DRR Nominee Rtr. PP Anuradha Senanayake was next on the agenda. Her speech ‘My year with you’ mainly focused on communicating her manifesto and plans for the year 2017/ 18 to the Rotaractors gathered. She also spoke about her journey of becoming the DRR nominee and thanked all the people who helped her along the way. The final item for the day was the expression of thanks given by the District Secretary Rtr. Ranisha Weerakoon and the conference was adjourned after paying tribute to our country. As the President elects and the Secretary elects of the year 2016/17 gathered for a brief meeting conducted by the DRR Elect Rtr. Mohammed Husni, all other participants gathered for refreshments and fellowship.


The after party at ‘Clique’ on the same evening was indeed a great ending to the Silver Jubilee Rotaract District Conference. Much enthusiasm was showed among the Rotaractors as some of them dressed up as super heroes as per the theme of the party which was ‘Batman Vs Superman’. It was an amazing party filled with great food, drinks and music and everyone danced the night away with much joy. As such, undoubtedly the 9th of April proved to be a memorable day for everyone who participated for the conference and the after party.