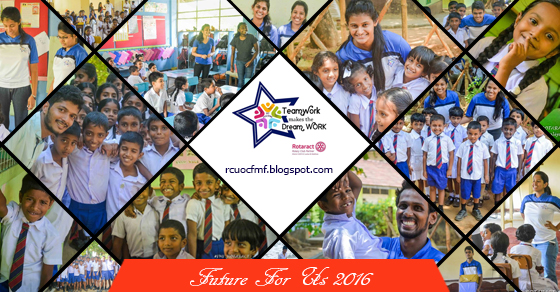 Mobs of curious, playful faces peeped through the windows and doors of classrooms as our club members entered Palana Maha Vidyalaya on the 29th of April 2016. Along with us went six counselors of the Sumithuru Foundation to conduct supportive counseling sessions to enrich the lives of the students through inspiration and motivation.


The visit to this school was a part of the ‘Future For Us’ project conducted for the third consecutive year. Our club has been taking care of this school for the last two years through donations for the educational needs of the students.  These students once visited Colombo where they were taken on a tour which covered the Planetarium, University of Colombo and Vihara Maha Devi Leisure Park. We also took steps to wish the students who sat for the Advanced Level examination by sending greeting cards throughout the last few years.

After enjoying the healthy breakfast treat prepared by some of the parents of the students, we set off on the mission of making a special and unforgettable day for the children in Hatharaliyadda. Our team got separated into two sub teams and dealt with the primary school and upper school students. Two members joined each classroom from grade one to five. Firstly, our club members spent a few minutes engaging in friendly conservations in order to get to know each child. They were very enthusiastic and energized in making conversation as we visited them in the prior year as well. They shared their future expectations with us and we encouraged them to work hard to make them a reality one fine day.


Afterwards we engaged in various entertaining activities such as “passing the hat” and “guess the act” through which we were able to make the children engage in team work harmoniously while singing their favorite songs. The winners of the games were gifted with chocolates which they shared amongst themselves during their lunch break. Afterwards on the request of the playful souls, our club members made arrangements to take the grade 4 & 5 children to their school play ground where they had the most amazing free and fun day at school.

Meanwhile the rest of our dedicated team members were busy with grade 6,7,8,9, and 10 students playing games in their school hall. All the grades from 6 to 10 were mixed into five different groups namely “Lion’s heart, Pipena tharu, Pinibindu, Rosa and Samanala” with one club member in-charge to oversee the activities. At first we made each team build a tower with the use of used newspapers within fifteen minutes and the team with the highest tower was deemed the winner. Secondly, each team was asked to act out the particular team’s name on stage with a short performance through which we observed great skills of coordination, time management and some talented actors at Palana Maha Vidyalaya. As the last event before their lunch break we had a relay organized in which two students had one leg of each tied together and asked to walk to a distantly positioned chair and race back to their team where our club members cheered their respective teams to pave their way to victory.


While all these entertaining & engaging events were carried on, the six counselors from the Sumithuru Foundation conducted group and individual counseling sessions for the students of grade 11 & 12 opening their minds to the world hidden by the traditional typical rural lifestyles to avoid discontinuation of schooling half way & giving them life coaching advices in leading better successful household & educational lives. Afterwards the generous councilors joined with the middle school students, having friendly conversations encouraging them to continue their education with hard work and dedication.

Post lunch events included a drama competition and distributing awards to the winning teams of the many games held during the day. The principal of Palana Maha Vidyalaya delivered an interesting motivational speech to the students and also invited our club members to their “Vesak bakthi geetha” show which is scheduled to be held during the month of May. As the last event of the day, all the donations contributed by our club members were handed over to the principal and his staff members to be distributed among the children as per their requirements.

To end the day with a memorable bliss, our club members engaged in a collective nonstop singing session to the rhythmic beat of the bongo, which was followed by a performance by Rtr. Peshala Samaratunga and Rtr. Shan Weerasinghe to inculcate in the minds of the children, the importance of entering into our local universities through immense commitment, to make their parents proud and satisfied about their sacrifices and hard work.

The highlight of the day which made all our club members’ hearts rest with satisfaction was the news we heard regarding the six school leavers from last year who got selected to enter into various local universities. We were lucky enough to meet two of them during our visit with whom we shared our happiness and wished them all the best for a bright future.

After a memorable and fruitful day, we set off home with the ambition of returning back next year to brighten their lives, to add more essence to their world and to see them reach their ambitions as we saw success blooming through the collective effort of the teachers, parents, students and also our devoted club members to make our country a better strong paradise to live in the years to come.