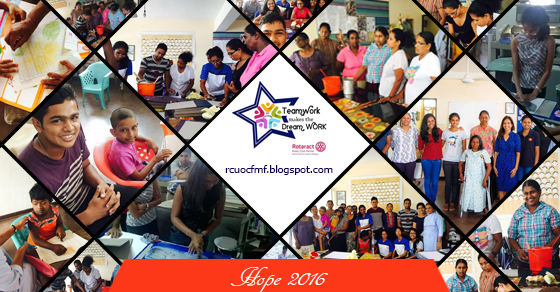 Project ‘Hope’ was initiated by the Rotaract Club of the University of Colombo Faculty of Management and Finance, in collaboration with the Jelly Bean Foundation, the Asha Trust and Panther Stationary in an effort to start up a sustainable project aimed towards lending a hand to the parents who have courageously taken up the duty of raising a child with special needs.


Rather than providing a one-time reward to these parents, the project focuses on providing employment opportunities which would benefit them continuously and with sustainability.

Background and Social Impact
The project is based at the Asha Trust Center, Badowita, Mt. Lavinia, which is an establishment created to provide education to children with special needs living in the Badowita area and to support the parents of those children.


One of the main issues faced by the center is the lack of motivation for the parents to bring their children to the center as they are occupied with earning their daily bread in an effort to provide nutrition to their children. Henceforth, these children are often deprived of the freedom to express themselves, to obtain an education of some sort and at times of love and affection.

In such a background the club, along with the Jelly Bean Foundation and Panther Stationary joined hands with the Asha Trust Center not only to provide motivation to the parents to bring these children to the center but also to provide them with a more sustainable source of income so that these parents are able to financially support the children while also giving them the much needed freedom, love and affection.

Training the Trainers
The employment opportunity provided by Panther Stationary for these parents was to complete the outer cover of the box files produced by the organization. As this process was to be carried out at the Asha Trust Center, Badowita, the first phase of the project was to train the ‘Hope’ committee, the teacher at the Asha Trust Center and some of the parents, to complete the aforesaid process.
The training program was held on 9th March 2016 at the factory of Panther Stationary in Rathmalana, with the participation of the ‘Hope’ committee members, teacher and two parents from the Asha Trust Center.


The Beginning
The second phase of the project was to train the parents of the Asha Trust Center. The training program was held on 16th March 2016 at the Center with the participation of 10 parents, who were trained by a representative from Panther Stationary and the ‘Hope’ committee.


The parents were given the task of completing 200 files in total which was successfully done. Furthermore, 500 more files were given to the parents to be completed within one week which they were able to achieve way before the deadline. Completion of the files in such a short period and the superior quality of the files show the motivation and eagerness of the parents to participate in this program, making the project a success to date.

Moving Forward
The third phase of the project started on the 20th of April 2016, where the parents were expected to complete 1000 files within the course of the week. The doubled quantity was an achievable task given the fact that these parents were highly motivated by the project and its evident sustainability.


Special thanks go to Panther Stationary, The Jelly Bean Foundation and Asha Trust Center for joining hands with our club to create a positive impact in the lives of these beautiful souls. This project was successfully chaired by Vice President Rtr. Shalini Wijewardana and Rtr. Dinuk Wickramanayake.