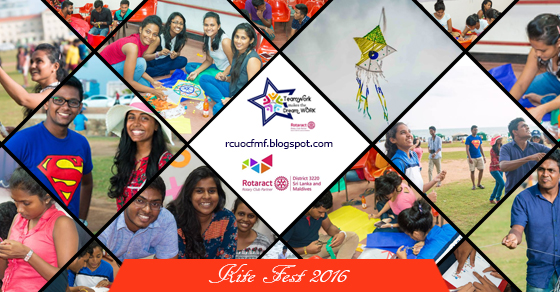 Kites of all different colors, shapes and designs flew over Galle Face Green as Rotaract Club of the University of Colombo Faculty of Management & Finance presented the inaugural ‘Kite Fest 2016’. The project was carried out under the avenue of International Understanding providing participants, an understanding of diverse cultures around the world.

Kite Fest 2016 was held on Saturday, 30th of April with an enthusiastic involvement of over 60 participants comprising of 20 teams that were registered for the event. Much hype was created among the students beforehand, as this was the first time that an event of such nature was organized in the University.


Breaking the ice from a traditional Kite Festival where participants are required to bring their own kites and fly them, Kite Fest 2016 introduced a series of challenges to its participants to ensure continuous involvement of them and to break the traditional precincts.

The event kicked off at the faculty premises with an ice breaker challenge where teams were required to identify lists of countries that were shown by different emojis. Teams were given 15 minutes to complete the challenge and identify as many countries as they could. Much enthusiasm was already shown by all participants as they worked among their teams to complete the task. First three teams to complete the challenge were team Fire Storms, team Suicide Squad and team Happy Faces. These three teams were given the opportunity to select a country of their own in designing kites, where as other participants were given with a random country. These represented countries around the world including countries like New Zealand, Brazil, India and Egypt.


The next phase of Kite Fest 2016 was designing kites with the countries that were allocated to each team. Each team was provided with a blank ready-made kite along with pair of scissors and a gum bottle. The challenge here was that each team was only allowed to use four colored tissues to complete their designs and was not allowed to use any material other than the ones provided to them. Creativity of the participants played a key role as they decided on their designs.


Much enthusiasm and energy was once again shown among the teams as they proceeded with designing kites. Teams were given a maximum of one hour to complete their designs and each team who completed, were able to move to the next challenge. Consequently, each team had to battle against the clock when it came to completing their designs. All the participants were refreshed with snacks during this period.


The final phase of Kite Fest 2016 was finding the mysterious person at Galle Face Green through the clues given to them. Participants took various means of transportation; cars, buses and even tuks as they raced over to Galle Face. The first team to finish off the challenges was Doomsday Bunnies (New Zealand). Other teams followed them soon after.


While the final phase of Kite Fest was taking place, all the kite designs were uploaded to the UOC FMF Rotaract Club Facebook page to give away the prize to the team with the most popular design. Team Suicide Squad (Japan) won this part of the challenge as they managed to receive most Likes on their post surpassing all other contestants.

Despite the cloudy weather that was present on the day, participants were much enthusiastic in flying their designed kites over the gales of Galle Face.  Participants went back to their younger days, taking the minds off the daily routine of being a student in the university. This was a new experience for some of the participants as they flew kites for the first time in their life.


At the end of the hectic evening, participants were rewarded with meals from Burger King. This was an opportunity for the teams to discuss the day’s proceedings as well as to build a network with other teams. Winners for the best kite design were also announced by the President of our club Rtr. Praveen Fernando following which he gave away prizes for the winners. The winning teams with the best designs were team Happy Faces (Brazil) and team High Flyers (Egypt).

This marked the end to the inaugural Kite Fest. Breaking the traditional grounds of a Kite Festival, the event was able to bring out the character and energy of each of the participants providing them with cherished memories to look back at.