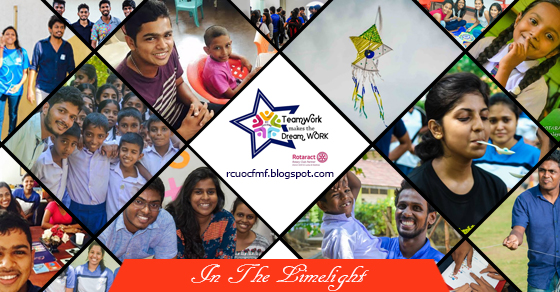 30 May In the Limelight – 4th Quarter Roundup

Posted at 03:21h in Round Ups, Uncategorized by rcuocfmfadmin 0 Comments

The month of May marks the end of one of the most successful years RC UOC FMF has ever had! Having had 3 amazing quarters, we were able to continue the same momentum in the 4th quarter as well. During the year, we completed close to 35 projects in all 6 avenues with immense success thanks to the hard work and dedication of all our club members.


‘In the limelight’, the quarterly roundup, gives you an insight to the many activities and achievements of the club during the final quarter of the year.

Best Rotaract Club of the year
Our Club was awarded the Best Rotaract Club of the year 2015/16 at the Rotary District Assembly held on the 7th May, 2016 at Galadari Hotel. Completing almost 35 projects, winning President of the month once, Rotaractor of the month thrice, publishing almost 100 blog posts with over 15,000 views and increasing our membership by 200% during the year are all proof that this prestigious award is well deserved!


The club’s Co- Chairpersons for the World Down Syndrome Day Celebrations; Rtr. Gehanya Gamage and Rtr. Ranithri Samarawickrama and Co-Chairpersons for the fifth phase of Project Serve, ‘Rotaract for Cataract’; Rtr. Ruvini Nuvangi and Rtr. Isuri Weeraman were all given awards to recognize their valuable contribution in making these projects a success.

Future for Us 2.0 – Hatharaliyadda
Having completed four phases, our club members visited Palana Maha Vidyalaya in Hatharliyadda, on the 29th of April 2016 as the fifth phase of ‘Future for Us 2.0’. We have been supporting the students of this school through the provision of stationary and other necessities required for them to have the best possible education since 2014.


Similar to the previous two years, an exciting day was planned by the Chairpersons Rtr. Aqeela Najeeb and Rtr. Peshala Samaratunga along with their dedicated committee members. Students of the primary section and senior section up to grade 11 engaged in many fun games and activities while the advanced level students participated in group and individual counseling sessions conducted by six counselors from the ‘Sumithuru Foundation’ in order to inspire them to chase their dreams and enrich their lives.


During our visit, we got to know that six school leavers from Palana Maha Vidyalaya have been selected to pursue higher education in different local universities. This was testament to the changes that we were able to bring about in the lives of these children who are brought up in a traditional rural lifestyle and are forced to discontinue education due to many reasons. This amazing news brought happy tears to many of our club members and motivated us to continue this visit for many years to come. Read more

Hope
Hope is a new initiative taken up by our club in order to provide sustainable earnings to the parents who have courageously taken up the duty of raising a child with special needs. This project is done in collaboration with the Jelly Bean Foundation, the Asha Trust, and Panther Stationary. The project is carried out  at the Asha Trust Center, Badowita, Mt. Lavinia, which is an establishment created to provide education to children with special needs living in the Badowita area and to support the parents of those children.

Through the efforts of the project Chairpersons Vice-President Rtr. Shalini Wijewardana and Rtr. Dinuk Wickramanayake, we were able to provide these parents an opportunity to complete the outer cover of the box files produced by Panther Stationary. The parents are given targets every week and they get paid based on the number of files completed by each of them.


Although the project is in its initial stages, it is evident that we were able to make the lives of these kids and their parents a little better through providing them an extra income. Hence, the club will be taking measures to carry out project ‘Hope’ in a much larger scale in the coming term.
Read more


Reach Out
‘Reach out’ is a project initiated by our club and the Rotaract Club of Colombo North (RCCN) together with the Rotaract District 3220 Sri Lanka & 141 Motors in reaching out to the victims of the recent floods in the country. Many generous individuals came forward for this worthy cause and we were able to collect an unexpected amount of donations in the form of cash, dry rations, water bottles, clothes and medicines within a short span of just four days.

Phase one of the project was carried out on the 20th of May, where the collected items were donated to the affected families around St. Mary’s Church, Welivita through Fr. Samaratunga. We have made arrangements to carry out the second phase of the project within the next week where more donations would be given out to the victims in order to help them rebuild their lives and homes.


This praiseworthy project was chaired by Rtr. Niroshan Weeraman, Rtr. Manahari Singarachchi and Rtr. Shenali Fernando from our club.

S.L.A.M
‘SLAM’ is an annual event organized by our club in collaboration with the Rotaract Clubs of Faculty of Science, Faculty of Arts and Faculty of Law. This year, it was an exciting scavenger hunt followed by a small after party, which was held on the 23rd of April, in the University premises with the participation of about fifty members from the four hosting clubs.


Followed by a brief session of ice breakers, the teams participated in the most awaited scavenger hunt where they had to run around the University premises completing small quizzes and thrilling, fun challenges. At the end, cash prizes were awarded to the two teams with the fastest performance and the best performance.


This time around, SLAM was done in a way it has never been done before providing the club members an opportunity to create bonds and fellowship with the Rotaractors of the other faculties of the University and it was successfully chaired by Rtr. Malith Nirmal Mendis and Rtr. Isuri Alahakoon. Read more

Kite Fest
Kite Fest 2016 was held on 30th of April with the involvement of over 60 participants comprising of 20 teams that were registered for the event. The project focuses on creating understanding among the participants about the different countries in the world and the diversity of their cultures.


The festival included many fun games and events that made the participants to get together and work as a team to create a creative kite that represents the country that was assigned to them. All the kite designs were uploaded to our Facebook page and the teams that created the most popular designs were rewarded with many prizes.


At the end of the day the project was able to break out of standard norms and educate the participants while creating unforgettable memories for them.


A special thank you must be given to the chairpersons of this project; Rtr. Kemitha Jayamaha and Rtr. Samith Palliyawaththa for creating such an outstanding event. Read more

Earth Savers
Earth savers is an environmental campaign that was implemented as the third phase of THE BATTLE OF THE GREENS.  The main focus of this project is to create awareness among the university students and the community at large regarding the importance of proper waste management and sustainability. The project was carried out with the partnership of Clean Tech Services which is a subsidiary of Abans Environmental Services.


The project was carried out in 3 phases. The first phase was targeted on creating awareness through social media about the green life concepts and waste management systems in terms of Reduce, Recycle and Reuse. In the second phase a proper waste management system was implemented within the faculty premises and the final phase will be focused on organizing an E- waste collection day within the university premises.


Acknowledgements must go to the Chairpersons of this project, Rtr. Niroshan Weeraman and Rtr. Dishan Leo for completing this project successfully.

BEAT’16 is a concert that will be held on 10th of June 2016 at Kularathna Hall (Ananda College) in collaboration with Daddy, Lahiru Perera, Kurumba & Tehan Perera, the best known names in the music arena in Sri Lanka. This will be the biggest event organized by the club and is targeting an audience of 800 people.


The main objective of this project is to raise funds for the signature community service project “I for an Eye” and other projects planned for the coming Rotaract term 2016/2017 as well as to deliver an incredible and unforgettable musical experience to the audience. Read more.

The club blog which has been tasting success ever since its launch in July 2015 will be concluding the year by publishing its 100th blog post. The blog exceeded the 14,000 view count by the end of the fourth quarter upholding its status as one of the most visited club blogs in the District.


Under the two newly introduced columns ‘Journey Through Rotaract’ and ‘Center Stage’ we able to interview many key members of our Rotaract journey that includes leading figures like DRR. PHF Rtr. Sathiyeandra Tharmakulerajasingham, DRRN. Rtr. Anuradha Senanayaka, PP Rtr. Harini Indiketiya, Rtr. Romanthi Anandappa and many more people who contribute immensely for the success of Rotaract. Those experiences and memories they shared will inspire us to continue our own Rotaract journey.


Finally, a special thank you must be given to all our club members who showed remarkable support and enthusiasm throughout the expedition of our Rotaract Club Blog. We hope to advance our blog to an even more exceptional level in the approaching new Rotaract year as well.