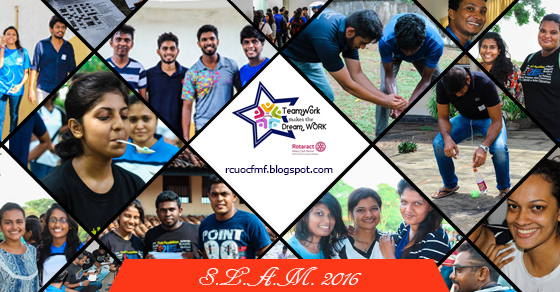 ‘S.L.A.M’ is an annual event organized by the 4 Rotaract Clubs of the University of Colombo, namely, Faculty of Science, Faculty of Arts, Faculty of Law and Faculty of Management & Finance. The main objective of ‘SLAM’ is to provide the club members an opportunity to create bonds and fellowship with the Rotaractors of the other faculties of the University. This year, it was an exciting scavenger hunt followed by a small after party, which was held on the 23rd of April, from 10.00 am onwards at the University premises with the participation of about fifty members from the four hosting clubs.

The day’s proceedings started off with the registration of participants and this was followed by an interesting ice breaker session which was enjoyed thoroughly by everyone. Out of the many games held, human bingo was the one that created the most interest as it gave the participants an opportunity to get to know each other in many different ways. Among the other games held were, lining up according to the birthdays and speaking about a given topic for a few minutes without pausing.


After lunch came the most exciting part of the day; the scavenger hunt. The fifty odd participants were put into groups of fours and fives comprising of Rotaractors from each faculty and they had to figure out five places around the university premises and complete a quiz and a challenge at each station. According to their performance, each team was awarded marks and the team to finish first and the team with the most marks were given cash prizes at the end of the scavenger hunt.

The starting point of the scavenger hunt was the Faculty of Science and the teams were given clues in riddle form which led them to five different stations; one each in the five faculties. Figuring out the places was a very tough challenge as the clues gave away so little, however through teamwork the participants were able to figure out all the stations; some a little faster than the others.


Once the teams arrived at the stations, they were given a small quiz comprising of general knowledge questions about the University of Colombo and Rotaract. Ten minutes were allocated to answer the quiz and regardless of whether it was completed or not the teams had to move on to the challenge. The challenges took many forms; a crossword puzzle, performing a haka in front of an audience of a minimum of five people, a selfie challenge and many more exciting games. Although it was quite a difficult task to run around the University completing the many challenges, all teams were able to complete the scavenger hunt within the given time of three hours.

The competition among the teams was very intense and team ‘1’ was the first to complete the final challenge, which was to collect a flag with their respective team number. However, team ‘9’ had the highest combined scores for the quiz and the challenges and was deemed the winners. After the cash prizes were given away to the winners, the after party kicked off and although everyone was exhausted after the scavenger hunt, they danced away in much joy.

This year’s SLAM provided a great opportunity to revive the bond we have with the Rotaract clubs of other faculties of the University and was undoubtedly a great experience for all the participants as it was unlike any other event in the Rotaract calendar.