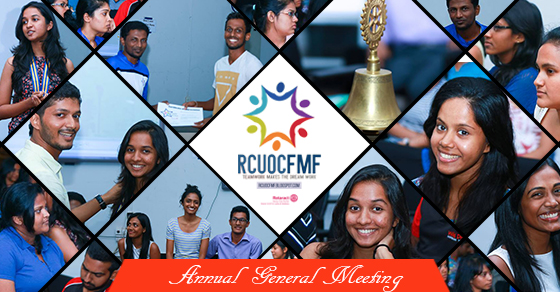 We are all aware about the saying “All good things come to an end” and it is the same in our Rotaract journey as the old year completed, we are preparing and planning for the new Rotaract year with the experience we gained from the prior Rotaract years and its members.


The Annual General Meeting for the year 2015/2016 was held on the 23rd of June 2016, in the faculty premises. It was a bittersweet day for all of us because we knew that this was the end of the Rotaract journey for the brothers and sisters who made us gradually fall in love with Rotaract; the very people who made our club one of the most outstanding Rotaract clubs in the District.


The initial half of the meeting was overflowing with many throwbacks and lovely memories we shared with the outgoing members as everyone was unique and so special for the survival of the club and their support and guidance is what gave us the training and confidence to fill in the void when they leave the club.


Our very own outgoing President Rtr. Praveen Fernando conducted the meeting and gave us a heartwarming speech about his Rotaract journey through the years and bid his beloved club farewell by thanking all the outgoing and current club members for their utmost support. He made a brief summary about all the projects undertaken by the club and thanked everyone who supported in making these projects a success.


Next on the agenda was giving away certificates to the chairpersons of the many projects completed in the third and fourth quarters, to appreciate their effort and hard work in making their respective projects a success. Then, Rtr Manahari Singarachchi and Rtr Akhila Wijekoon were awarded as the Rotaractors for the 3rd Quarter and Rtr. Shenali Fernando and Rtr. Nipuna Thebuwana were awarded for the final quarter.


It was with much eagerness that Rtr Praveen officially handed over his position to the incoming President Rtr Hiruni Perera by handing over the gong, medal and charter certificate of the club. He also justified as to why Rtr Hiruni and her board was selected mainly owing to their agility, hard work, adaptability, ability to face challenges successfully and most importantly their unparalleled dedication to the club.


Then, Rtr Hiruni introduced the new board and thanked the outgoing board for their support and dedication for the growth of the club and promised to carry on their work and take the club to even greater heights in the upcoming year. She also spoke a few words of motivation for the club members and asked for their support in making the new year a success. Afterwards, the outgoing board was given a small token of appreciation by the incoming board and a “Thank you” cake was cut and shared among the club members.


As the meeting came to an end, it was indeed an emotional moment when we bid farewell to our beloved seniors and outgoing members. We thank them for their never ending love and dedication as this was undoubtedly the special ingredient which helped our club grow from strength to strength.