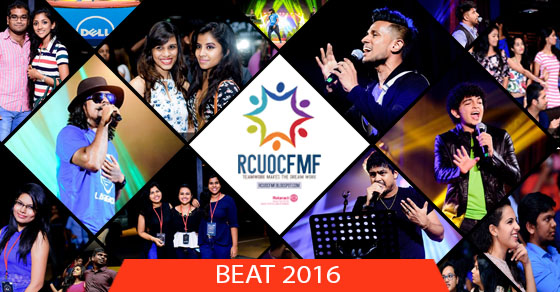 Posted at 08:14h in Avenues, Finance, Uncategorized by rcuocfmfadmin 0 Comments

The most anticipated musical extravaganza, BEAT 2016, was successfully held on the 10th of June 2016 at Ananda College, Kularathne hall with an audience of over 700 people. The sold-out show brought together Daddy, Lahiru Perera, Kurumba and Tehan Perera upon a single stage for the first time in Sri Lanka. The evening was indeed filled with dynamic performances, exciting beats and sensational melodic compositions.


This was the first ever project of this caliber organized by our club and it was carried out under the avenue of Finance. The main objective was to raise funds for the signature community service project “I for an Eye” and other projects planned for the Rotaract term of 2016/17 as well as to deliver an incredible and unforgettable musical experience to the audience.  All proceeds of the concert will be directed towards conducting free eye clinics and other similar charitable endeavors of the club.

The concert started off with the performance of Ryan Henderlin -the guest artist of the evening and the winner of YES Superstar Season 3. The audience was thoroughly captivated by the classical sense of his opening song ‘The Sound of Silence’. He then warmed up the crowd with his second song ‘Adventure of a lifetime’ by Cold Play which strengthened the grooves on stage and kept feet tapping and heads popping throughout the entire song.


Shortly after playing a sponsorship video, next on stage was Kurumba featuring Dushyanth Weeraman and Devshan Perera. Beat was their first ever show as Kurumba. Their lineup ran from mainstream classics to pop and all the way down the line to Baila. Devshan’s ‘Dewduwe’ song captivated the audience and the sentiment in the song was undeniably real. Their mashup of Sinhala, English and Hindi songs including, ‘Sorry’, ‘Uptown Funk’, ‘Bangara’, ‘Dagakara hadakari’, ‘Nadee ganga tharanaye’, ‘Udarata Kadukara’, ‘Mosa mosa’ and ‘Kundumani’, was a specially genius move with a large payoff from the audience where the crowd collectively bounced to the beat and expertly sang along. Dushyanth enjoyed himself, interacting with the audience between almost every song. The band pushed things to overdrive with a three-song baila finale that left the audience elated.


A short video on the undertakings done by the club was then played center stage which gave a decent impression to the audience with regards to what our club has been doing and will be doing in the future.


Hot Chocolate featuring the youthful singer Tehan Perera then moved on to the stage with ‘Unuhuma 1’. Song, ‘Ratakin Eha igili’ featuring a funky dance by the three singers, induced the beats and really fascinated the audience. Tehan performed his most popular song ‘Unuhuma 2’ which was complemented by a visual display of the music video. As if sensing the audience’s need for momentum they moved on to a Baila session which soon had nearly everyone in the hall dancing along.


Then came a short interval of 15 minutes and it did not disappoint the crowd in terms of food and beverages as there were food stalls from Pizza Hut, Elephant House and Maggie which certainly added value to the show.


After the interval came the most exciting part of the show, where Daddy band came on stage. The band extensively played their original compositions including ‘Masssina’, ‘Dagalanna ba’, ‘Chandrayan pidu’ and ‘Ai kale’. Nimantha, the A-list keyboardist of the band nailed the song ‘Massina’ embellishing it with a tastefully hypnotic keyboard performance. The steady drum and bass riffs pulled in the reigns and kept all the songs mainly within their well composed structures and the energy of the audience was certainly a fuel to the band. It was Viresh (Chika) who really stole the show, driving each song with his mesmerizing vocals and reverb filled guitar presence. One of the highlights of the show was their remix song ‘Sanda basa giya thana na’ which made the audience pump their fists in the air and sing along.

At the climax of the night came Lahiru Perera (La Signore), the trendsetter of the Sri Lankan music arena. He performed all his songs together with the Daddy band and a perfect chemistry was seen between them. Almost all the performances including ‘Kessata kos ata’, ‘Mottu’, and ‘Rambari’ were dance floor ready. Lahiru was overwhelmed when the audience knew all the lyrics of his new song ‘Mata Rawana’, which he sang along with them.


As the night came to an end, the final song of the show was ‘Oye Ojaye’ where all the artists stepped on to the stage and sang it to wind up the show. All in all, Beat was a great night filled with colour, passion, talent and glamour.

We would like to extend our special thanks to the Platinum Sponsor of the show, Dell Softlogic, without whom Beat would not have been materialized. We are also grateful to Sampath Bank, Cargills (Ceylon) Plc, Institute of Automotive Engineers, Xtream Youth, Empire Studios, Pulse, Mawbima and to each and every person who endeavored to make Beat 2016 a success.


Congratulations to our very own Rtr. Thilini Leeniyagolla and Rtr. Nawangi Poholiyadde and the Beat committee for successfully organizing the biggest finance project in the club history which made the Rotaract year 2015/2016 end in style.