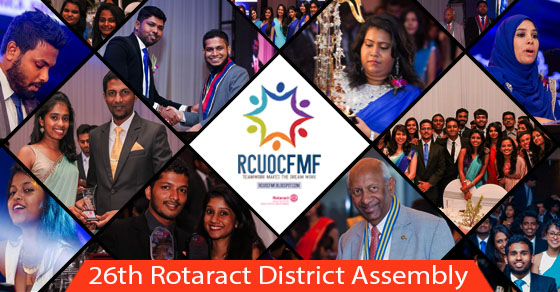 Posted at 03:04h in District Events, Others, Uncategorized by rcuocfmfadmin 0 Comments

The 26th Rotaract District Assembly, which is one of the most glamorous events in the Rotaract calendar, was successfully held on the 2nd of July 2016 at Water’s Edge, Battaramulla with the participation of more than 400 Rotaractors from all over the country. This marked yet another beginning of a new Rotaract year with the installation of the District Rotaract Representative Rtr. PP Mohamed Husni and his Committee for the year 2016/17. This colorful event was jointly organized by the Rotaract Club of Colombo North and the Rotaract Club of Singer Sri Lanka.


After the registration of the many attendees, the first session kicked off with the arrival of the distinguished guests and lighting of the traditional oil lamp. After the dignitaries took their respective seats at the head table, the assembly was called to order by the Chairperson followed by the Flag Salutation, Invocation, Four-way test and the Rotaract Song.


The gathering was then welcomed warmly by the Chairperson recognizing the presence of the distinguished guests at the event. Next, was a short video highlighting the many projects carried out during the past term which was shown as a part of the Secretary’s report presented by the District Secretary for the year 2015/16, Rtr. PP. Ranisha Weerakoon. In her speech she drew special attention on what has been achieved so far by the Rotaract District 3220, especially in the past term. She also took the time to thank all individuals who were and are a part of the Rotaract movement for the tremendous help and support extended throughout the year.

Afterwards, the DRR for the year 2015/16 Rtr. PP. PHF Sathiyeandra Tharmakulerajasingham delivered a heartfelt address to the gathering upon the conclusion of his term and thanked each and every member of his committee for the unparalleled support extended towards making the past term one of the most successful years Rotaract has witnessed. He then awarded the outgoing District Committee with tokens of appreciation along with interesting introductions for each member which gave away many exciting facts about those individuals who led the Rotaract movement in the past year.

Next on the agenda was a short address by the District Rotaract Committee Chair for the year 2015/16 Rtn. PP. Saifu Adamaly and this was followed by the address by the Past District Governor Rtn. MPHF. George Jesuthasan, who was also the Chief Guest for the session. His speech accentuated on the success of the past term and the importance of good leadership and how it could impact the society at large. He delivered an important message through his speech, which undoubtedly gave the motivation to many of the young Rotaractors to work towards making a change in their own capacity.


Watch the tribute video below.

The proceedings of the second session started off with the arrival of the dignitaries followed by the lighting of the traditional oil lamp, Flag Salutation, Invocation, Four-way test, the Rotaract song and the welcome address by the Chairperson. Next was the introductory video of the Rotary year 2016/17 which unveiled the theme for the year ‘Rotary serving Humanity’ along with the logo.


After taking the podium, DRR Rtr. PP Mohamed Husni introduced the Rotaract theme for the year ‘Vision to action’, which is in line with the vision of the Rotary International movement. He highlighted that his mission for the year is to make dreams a reality and working together to achieve the global goals, despite our diversities. He then drew his attention to some of the plans he has for the year which included, increasing member retention and involvement, initiating pro bono programs to help the needy, establishing a Rotaract environment sustainability team and effective collaboration with Rotary and supporting each other in doing worthy projects.

His address was followed by the induction of the incoming District Committee for the year 2016/17 and the Directors appointed are as follows:

Following the induction of the District committee, Rtn. Senaka Amarasinghe, the District Governor for the year 2016/2017 who was also the Chief Guest for the second session, addressed the gathering and wished the new committee for a successful year ahead.

One of the most exciting events of the day was the Awards Ceremony which was spread out over the two sessions, as it recognized the invaluable contributions and achievements of the Rotaract clubs in the District and their individual members throughout the term 2015/16. The many awards received undoubtedly made the day extra special not only for our club, but also for all the other clubs who were bestowed with  prestigious awards in different categories.

The final item on the agenda was the delivery of the vote of thanks by the incoming District Secretary Rtr. IPP Tilani Subasinghe, after which the 26th Rotaract District Assembly was terminated.

The breakout sessions were important to all of us since the office bearers and the club members were imparted valuable knowledge which would certainly help us to carry out the upcoming term successfully.


With the conclusion of the breakout sessions, an evening full of fun and music began. This gave an amazing opportunity for the Rotaractors to mingle and network with each other while enjoying koththu and good music. As such, the 26th Rotaract District Assembly proved to be an amazing day for us all which gave so many exciting memories to cherish in the years to come.