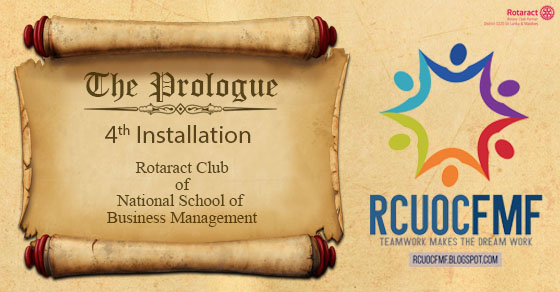 Posted at 06:34h in Installations, Others, Uncategorized by rcuocfmfadmin 0 Comments

The 4th Installation ceremony of the Rotaract Club of National School of Business Management was held on the 8th June 2016 at the NSBM auditorium, Nugegoda. On behalf of our club Rtr. President Christeena Hiruni , Rtr. Chathurika Wijeratne, Rtr. Koshini Coorey, and Rtr. Nishadi Mendis attended the event. Symbolizing the Sri Lankan culture, the event was organized with traditional decorations such as Sri Lankan traditional masks, and unique gokkola decorations.

Registration was open at 06.00PM and all attendees had to take a photograph with the Sri Lankan traditional mask at the end of registration, process to symbolize the participation. The event commenced with the lighting of the oil lamp by the dignitaries at the head table, which was followed by the Rotaract Invocation, Flag Salutation, Four Way Test and the Rotaract Anthem.
The dignitaries for the evening were,
• Chief guest Rtn. President Roshan Perera
• Youth Services Chair Rtn. PHF Selvarajan Maherakanth
• District Rotaract Committee Chair Rtn. PHF Sanjeewa Fernando
• District Rotaract Representative Rtr. PP Mohomed Husni
• Special guest Mr. Trevin Hannibal
The welcome speech was delivered by Rtr. Piyath Gunawardane. He thanked all the participants and revealed that transforming values and strengths into key successful projects will be beneficial not only for the society but for the organizers as well. Following up, the secretary’s report was presented by the outgoing Secretary Rtr. Yerusha Fernando and she highlighted the fact that they were able to successfully complete 21 projects during their term which included 5 professional development projects and 7 community development projects. Some of their signature projects are “Children’s day project”, “Rotaract for cataract “which was organized in partnership with our club along with the RC of Cinnamon Gardens, “Reignite”, “Flair 2015”, “Manusathkara eye clinic” and “Dream job workshop”.

The outgoing president Rtr.Mayukha Abeyratne thanked all the members and lecturers for the continuous support and the  dedication extended during his tenure as the president for the last year and shared some wonderful experiences he gained through his amazing Rotaract Journey.
Rtr. Harindee Fernando then introduced the incoming president Rtr. Oshadha Abhayasundara, who was a student of Ananda College and one of the most dedicated and reliable Rotaractors.
Then the Incoming President addressed the gathering and acknowledged the club for selecting him as the president and mentioned that he take pride in doing projects with all individuals. Further, he highlighted the value of the commitment in achieving the final result and mentioned diversity, of members, would be the secret key factor to simplify the task objectives. He then introduced the Board of Directors for the year 2016/2017.
The Board of Directors 2016/17 of Rotaract Club of NSBM
President – Rtr. Oshadha Abhayasundara
Immediate Past President – Rtr.Mayukha Abeyratne
Vice President – Rtr. Tabit Jeffrey
Secretary– Rtr. Carine Anandage
Treasurer – Rtr. Murtaza Anverali
Sergeant- at-arms – Rtr. Thilina Ahangama
Club Service Director – Rtr. Piyath Gunawardane
International Service Director – Rtr. Harindee Fernando
Professional Development Co Directors – Rtr. Tharuka Dissnanayake and Rtr. Dimuth Wickrmasinghe
Community Service Co Directors – Rtr. Kanishka Wickramaratne and Rtr. Nimedha Rajapaksha
Finance Service Director – Rtr. Vimukthi Bandara
Public Relations Director – Rtr. Sahan Weerachandra
Digital communication Director– Rtr. Peshala Dayantha
Sports Director – Rtr. Peshala Kalansooriya

The District Rotaract Representative Rtr. PP Mohomed Husni, started his address by outlining the value of creativity and innovation and emphasized that Rotaract is a unique platform to create innovative ideas. Furthermore, he mentioned that Rotaract is a place for try outs and learning and it’s not only about the President of the club but, about all the members who bring out the life to new ideas. He completed his speech by quoting Albert Einstein, “Creativity is intelligence having fun”.

The gathering was then addressed by the Rtn PHF Sanjeewa Fernando who stated that the Steering wheel of the car has now been handed over to the new board, and its board’s responsibility to drive the car by obeying all the rules and regulations.
The Guest of Honor for the evening, Rtn PHF Selvarajan Maherakanth delivered his speech and explained the benefits of being a Rotaractor. He shared his experiences of interviews he conducted and emphasized that paper qualifications are insufficient to become a good leader. He concluded his speech by stating that Sri Lanka is currently standing in a position where increasing foreign earnings are really important and how the past Rotaractors collaborate with the  government in organizing development projects to earn foreign direct investment.
Next, the Special Guest Trevin Hannibal addressed the gathering and pointed out the importance of following a Dream. Further, he said “Life is too short for us to live in conclusion” and invited all Rotaractors to hold hands to do something big in future. Then the audience was entertained by an interesting magic session .
The final address of the evening, the key-note speaker  Chief Guest  Rtn. President Roshan Perera appealed to the audience on positive personality traits and how Rotaract will help to improve and integrate new positive traits in life.  He strongly advised Rotaractors to be humble and keep asking questions from yourself to achieve better heights in your life.
The tokens of appreciations were distributed to the dignitaries of the event and which was followed by the felicitations to the newly appointed board of members. To mark the end, the vote of thanks was delivered by the Secretary, Rtr. Carine Anandage who mentioned, “Every story has an end, but in life, every ending is a new beginning”.
The Rotaract Club of University of Colombo, Faculty of Management & Finance, wishes Rtr. Oshadha Abhayasundara and his board an amazing Rotaract year ahead.