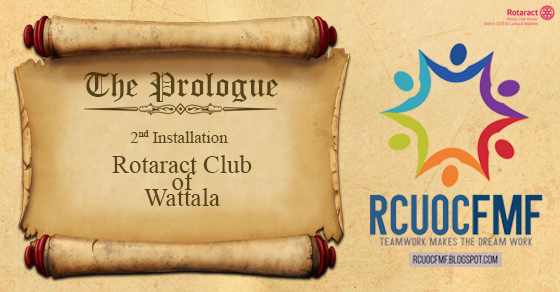 Posted at 06:26h in Installations, Others, Uncategorized by rcuocfmfadmin 0 Comments

The Installation Ceremony of the President for the year 2016/17, Rtr. Anfar Nilar and his Board of Directors of the Rotaract Club of Wattala was held on the 17th of July 2016 from 4.30pm onwards at the Sri Lanka Institute of Tourism and Hotel Management (SLITHM). Registration started at 3.30pm and on behalf of our club, Rtr. Chathurika Wijeratne attended the event.

The installation was called to order by the outgoing President Rtr. Aneez Anver and was followed by the Rotaract Invocation, Flag Salutation, Four-way test and the Rotaract song. After the gathering was warmly welcomed, the Secretary’s report for the year 2015/16 was delivered by the Outgoing Secretary Rtr. Tashiya Jayatilaka and a creative video clip that included memorable photographs from each of their projects was presented to the audience as well. Despite being the charter board, they have been able to complete many successful projects that included outstanding projects like “Expressions”, “Car Wash”, “Futsal Tournament”, “Summer Spades”,” Run a Life” and “Flood relief project”.


The audience was addressed by the Outgoing President Rtr. Aneez Anver who shared his wonderful experience as the first ever President of the club. He expressed his gratitude and praised his Board and all club members for the immense support extended throughout the year and stated that he is confident that the Incoming President Rtr. Anfal Nilar would take the club to greater heights. He concluded his speech with a quote that he has followed throughout his life; “Always believe in yourself and what you can do”.

Next, Rtr. Aneez collared Rtr. Anfal Nilar as the President and officially handed over the duties and responsibilities of the club. Then, the new board for the year 2016/2017 was inducted.


District Rotaract Committee Chair, Rtn. Sanjeewa Fernando addressed the gathering and narrated a story of a bird that revealed a very meaningful message to the audience; “Don’t compare yourself to others, just be yourself and think of what you are capable of”. Next on the agenda was the address by the Youth Services Chair Rtn. Selverajah Maherakanth.

His speech was followed by the District Rotaract Representative Rtr. PP Mohamed Husni. In his speech he shared a very interesting fact about the date of the installation; it was the day when Mumtaz Mahal died while giving birth to her child a long time ago in 1631. He also appreciated the participation of all the members who attended the installation and ended his speech with some golden words; “Things that seemed impossible can happen, so we should never take anything for granted”.

The Chief Guest for the evening  Rtn. PHF Dinesh Selliah, who is the President of their sponsoring club, then addressed the gathering and appreciated the hard work of all the club members who worked together as a family. He congratulated the Outgoing Board for the marvelous work they have done as the charter Board of the club.

After distributing the tokens of appreciation to the dignitaries, the floor was open for felicitations. To mark the end of the ceremony, the vote of thanks was delivered by the Secretary for the year 2016/17 Rtr. Keshiya Raj which was followed by the National Anthem. Then the 2nd Installation Ceremony of the Rotaract Club of Wattala was terminated and the attendees gathered for refreshments and fellowship.

The Rotaract Club of University of Colombo, Faculty of Management & Finance was delighted to be a part of the Installation Ceremony and conveys its warm wishes to the Rotaract Club Wattala for a successful year ahead.