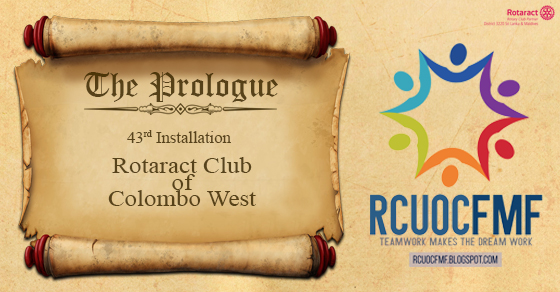 Posted at 05:14h in Installations, Others, Uncategorized by rcuocfmfadmin 0 Comments

The 43rd Installation Ceremony of the Rotaract Club of Colombo West for the Rotaract year 2016/2017 was held on the 22nd of July 2016 at the Sri Lanka Institute of Tourism and Hotel Management auditorium, under the theme “Rise-Inspire-Empower”. On behalf of our club, Rtr. President Christeena Hiruni Perera, Rtr. Dilini Perera and Rtr. Devmini Weeerasuriya attended the event.

Registration was open from 6.30 pm and the event commenced with the arrival of the Chief Guest and other dignitaries and lighting of the traditional oil lamp which was followed by the Rotaract Invocation, Flag Salutation, Four Way Test and the Rotaract Song.

The dignitaries for the evening were,

The gathering was warmly welcomed by Rtr. Abdul Rahman, the Incoming Club Service Director and then the Secretary’s Report for the year 2015/16 was delivered by the Outgoing Secretary Rtr. Shamlan Lye along with a creative video clip that included photographs from the projects carried out by the club.
Next, the Outgoing President Rtr. Azeeza Najimudeen addressed the gathering and thanked all who supported her throughout her Rotaract year and proudly mentioned how she managed to increase the membership of the club during her tenure as the president. Then she introduced the Incoming President Rtr. Sasmini Bandara who was a student of Anula Vidyalaya where she was the Vice-President of the Interact club. Also, she was the Secretary for year 2014/15 and Vice-President for the year 2015/16 of the Rotaract Club of Colombo West. The introduction was followed by a surprise video.

Next, the Outgoing President officially handed over the duties and responsibilities to the Incoming President Rtr. Sasmini Bandara by collaring her and handing the gavel and the Charter Certificate.

After the official collaring, the new President addressed the gathering. She started her speech by answering the question, why she joined Rotaract. Further, she thanked the Immediate Past President for her contribution in increasing the membership of the club from 20 to 54 members and she extended an invitation to other Rotaract Clubs to join with them for their monthly Joint meetings. She concluded her speech by thanking everybody who supported her throughout her Rotaract journey. Then she introduced the Board of Directors for the year 2016/2017.


The Board of Directors 2016/17 of Rotaract Club of Colombo West;

The District Rotaract Representative Rtr. PP Mohamed Husni then addressed the gathering and he congratulated Rtr. Azeeza Najimudeen, the Immediate Past President, for her achievements. He highlighted the Rotary National Theme and stated that as Rotaractors our actions throughout our life should reflect what we believe in Rotaract and he emphasized the importance of Ethical Sponsorships.

On behalf of DRCC Rtn. PHF Sanjeewa Fernando, Co-District Rotaract Committee Chair Rtn. Husssain Khaleel addressed the gathering. He congratulated the Past President for the increase in membership and highlighted the fact that the most important job the new president has is to retain the current membership of the club.

Next on the agenda was the speech by the Guest of Honour Rtn. Yukthi Gunasekara. He was introduced by Rtr. Maziyya Fareed, Assistant Secretary for the year 2016/17. He started his speech with a story about the world famous Mahatma Gandhi and explained that certain experiences in our life defines our mission, and stated that for us it should be Rotaract that is going to be the experience that changes our lives. Further, he explained the meaning of the Club’s tag line;”Rise-Inspire- Empower”.

Final address for the day was done by the Chief Guest, Rtn. PHF Roshan Perera. He started his speech by giving a question to the audience to ponder; “why did we join Rotaract?”. He then explained that it is because of the greater satisfaction we can get by doing good to the society. He stated “The only thing that will stop you from fulfilling your dreams is yourself. So don’t waste a single day not following your dream. Because life is too short.”

Next, the tokens of appreciation were distributed to the dignitaries of the event followed by the felicitations. To mark the end of the event, the vote of thanks was delivered by the Secretary, Rtr. Senal Jayawardana.

The Rotaract Club of University of Colombo, Faculty of Management & Finance, wishes Rtr. Sasmini Bandara and her Board an amazing Rotaract year ahead.