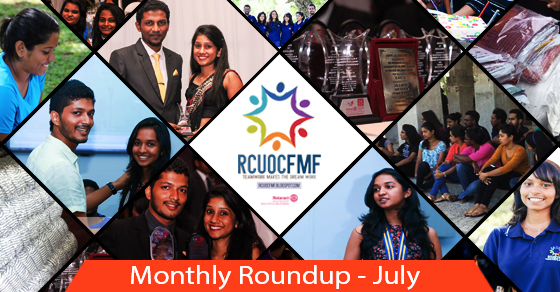 Posted at 09:01h in Round Ups, Uncategorized by rcuocfmfadmin 0 Comments

The month of July marked yet another new beginning for our club and set the tone for a busy, fun-filled year ahead. The term started off with the appointment of Rtr. Christeena Hiruni Perera as the new President and her ever so capable Board of Directors to lead the club in the term 2016/17. In the short span of just one month, our club was able to start a few new initiatives which are detailed below.

The 26th Rotaract District Assembly held on the 2nd of July 2016, was one of the proudest days for our club, as we were able to bag over 15 prestigious awards in many different categories! This was a testament to the achievements and tenacity shown by all the club members during the past Rotaract term of 2015/16.

The awards won are as follows:

We extend our warm wishes and congratulations to all our club members who won awards that evening, especially to the Outgoing Board of Directors led by our very own Rtr. IPP Praveen Fernando, for a job well done and for all that they have done for the club throughout the years.

Reach Out- Phase 2
Reach Out was a project initiated by our Club along with the Rotaract Club of Colombo North, in aid of the victims affected by the catastrophic floods and landslides that our country experienced in the month of May. As the first phase of the project, in-kind donations collected from many charitable individuals were distributed to 300 odd families taking refuge at the St. Mary’s Church, Weliwita on the 20th of May and the Church of Our Lady of Perpetual Help, Balagala on the 30th of May.

Having completed the first phase in May itself, the two clubs decided on using the cash donations collected, to purchase household items which are required by the victims to settle back to their previous lifestyles. As such, we purchased and donated mats, pillows and mosquito coils for 100 families taking refuge in Our Lady of Good Health Church, Sedawatte on the 12th of June.

This worthy project, which was chaired by Rtr. Shenali Fernando, restored our faith in humanity and made us realize that Sri Lankans are some of the most generous people in the world who would come forward to help people in need like their own. Read more

Festive Giggles
#FestiveGiggles, is an innovative project chaired by Rtr. Kalani Perera and Co- Director International Understanding Rtr. Dewmini Weerasuriya. This project is undertaken in order to enhance people’s knowledge about some of the craziest, messiest and most colorful festivals and events happening around the globe paving the way for people to understand the culture and life of different nationalities in a unique and exciting manner like never before.

Under this project, we will be posting descriptions of vibrant and unique festivals happening in different countries throughout the year; starting from mass food fights in Australia to love parades in Germany and the Mud Festival in South Korea! So, head on to our Facebook page and search with the hash tag “#FestiveGiggles” to enjoy this roller-coaster ride around the globe.

Green Meetings – First Board Meeting
The first board meeting was held on July 4th, at the Independence Square. As a part of our green life initiative, the meeting was conducted in a very environmental friendly manner. Instead of being surrounded by concrete walls, we were able conduct the meeting under the shade of trees while enjoying the refreshing atmosphere.

At the meeting, every avenue director presented the year plan for their respective avenues and future plans were discussed to take the club to even greater heights in the coming term. Energized by the beautiful scenario and the freshness of the nature, the meeting was filled with laughter, excitement and hope.

President of the Month
President of the month, chaired by our Joint PD Directors Rtr. Amaya Karunaratne and Rtr. Haresh Wijayanayaka, is a project which will continue throughout this term where two members of the club will be given the opportunity to conduct general meetings after the official proceedings are over. The appointed members would be required to come up with activities such as ice breakers in order to strengthen the bond among the club members and make meetings more exciting and fun.

This project is expected to help members develop their leadership and people skills along with professionalism in order to mold them into better, more confident undergraduates.

Club T- Shirt
As the first financial project of the new term, the club T- Shirt was introduced incorporating the new logo of the club and the theme of the year, which would yet again be “Teamwork makes the dream work”. This project is chaired by the Finance directors; Rtr. Sapuni Senarathne and Rtr. Udanee Silva.

We would like to extend a special thank you to ‘Creatia Promotions’ for doing a commendable job in printing the t-shirts according to our exact specifications.

Beat
The musical extravaganza BEAT 2016, chaired by Rtr. Thilini Leeniyagolla and Rtr. Nawangi Poholiyadde, was held on the 10th of June 2016 at Ananda College, Kularathne hall. It brought together some of the best performers in the Sri Lankan music industry; Daddy, Lahiru Perera, Kurumba and Tehan Perera, upon a single stage for the first time in Sri Lanka.

The main objective of this concert was to raise funds for the signature community service project “I for an Eye” and other projects planned for the Rotaract term 2016/17 while delivering a wonderful and unforgettable musical experience to the audience. This project holds a special place in our Rotaract journey as it was the first ever project of this caliber organized by our club. With the participation of over 700 energetic people, BEAT 2016 was able to deliver one of kind musical experience to the audience. Read more

Under this project very unique and fascinating character sketches are being published on our Facebook page. The main focus of this project is to create a bond between the board of directors and club members by letting the club members know about those individuals who will be leading our club in the term 2016/17. Each of the character sketches posted was able to portray the unique and interesting individual characteristics and the skills of each board member in a fun filled manner.

In its revolutionary path, the Club Blog was able to achieve the ultimate reward by winning the Gold Award for the best blog for the term 2015/16 at the 26th Rotaract District Assembly. It was an honor to receive this award and the club would like to congratulate and acknowledge our very talented Editor and Sub-editor for the term 2015/16 Rtr. Rtr. Ruzni Faik and Rtr. Bhashini Gamage for achieving this huge success.

Continuing its ground breaking tradition in the new term as well, by the end of the July the blog has published more than 110 articles and has surpassed the 17000 view count. During the month, a new column was introduced; “The Prologue”, which will cover the Installation Ceremonies of the other Rotaract Clubs in the District when they officially step into the new Rotaract term.

Finally, a special thank you must be extended to all our club members who show remarkable support and enthusiasm towards making our Blog the best there is in the entire Rotaract District 3220. We hope to give even more interesting and unique experiences to all our Blog readers in the future.