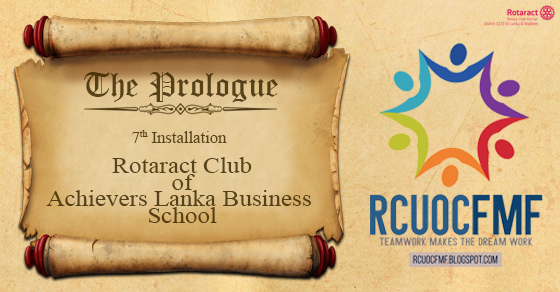 Posted at 05:29h in Installations, Others, Uncategorized by rcuocfmfadmin 0 Comments

The Installation of the President, Rtr. Maneesha Abeyarathne and her Board of Directors for the year 2016/17 of Rotaract Club of Achievers Lanka Business School was held on the 7th of August 2016 from 4.00 pm onwards at the Royal College Union Skills Centre, Colombo 7. Registrations for the event commenced at 3.30 pm and on behalf of our club Rtr. Thilini Leeniyagolla, Rtr. Malith Nirmal Mendis, Rtr. Isuri Alahakoon, Rtr. Shan Weerasinghe, Rtr. Uvini Liyanage and Rtr. Dinithi Cooray attended the event.


The installation was called to order by the Outgoing President, Rtr. Aaqeel Jiffry and was followed by the Flag Salutation, Rotaract Invocation, Rotaract Four-way test and the Rotaract song. The gathering was then warmly welcomed by Rtr. Naadir Thassim and Rtr. Rimzan Raheem; the Co-Chairpersons of the 7th Installation Ceremony of RCALBS.


The gathering was then addressed by the outgoing President Rtr. Aaqeel Jiffry. He shared his most treasured experiences and memories as the President of the club with the audience very emotionally and mentioned that it is these memories that make him feel that he had lived his life. He expressed his sincere gratitude to his Board and his club members for the immense support they extended to end his term of service with great success in style.

The President for the year 2016/17, Rtr. Maneesha Abeyarathne was then collared by the outgoing President Rtr. Aaqeel Jiffry and was officially handed over the responsibilities and duties of the club.


The audience was then addressed by the Incoming President Rtr. Maneesha Abeyarathne, who very humbly acknowledged all those who helped, encouraged and supported her every step of the way to achieve what she had achieved today. She further stated that she hopes to have a successful year ahead under the theme, “United to ignite.”

District Rotaract Representative Rtr. PP Mohamed Husni addressed the gathering and congratulated the Immediate Past President Rtr. Aaqeel Jiffry and wished the newly appointed Board headed by the President Rtr. Maneesha Abeyarathne to have a successful year ahead. Next on the agenda was the address of the District Rotaract Committee Chair Rtn. PHF. Sanjeewa Fernando, which was followed by the speech of the Youth Services Chair Rtn. PHF Selvarajah Maherakanth.


The agenda consisted of an interesting entertainment segment, which was a song sung by the Interact President of AIS, Naadiya, who was a semi-finalist at FIA 2015.


Next in line was the address by the Guest of Honour, PDRR Rotary Ann Nishani Perera who also expressed her warm wishes to the new Board for the year 2016/17. The audience was then addressed by the Honorable Chief Guest, Rtn. PHF. Hussein Fazleabas, who is the President of Rotary Club of Colombo Mid Town. He too extended his sincere wishes to both the outgoing Board for the work well done and the Incoming Board for a successful year ahead.


Next, the dignitaries were awarded with a token of appreciation for their presence which was followed by the felicitations of the other Rotaract and Interact clubs. The vote of Thanks was delivered by the Secretary for the year 2016/17 Rtr. Laila Zafir to mark the end of the memorable event.


The 7th Installation of Rotaract Club of Achievers Lanka Business School was terminated and dismissed by the President for the year 2016/17 Rtr. Maneesha Abeyarathne and the attendees gathered for refreshments and fellowship.

The Rotaract Club of University of Colombo, Faculty of Management & Finance consider it a great privilege to be a part of this installation ceremony and extends best wishes to the Rotaract Club of Achievers Lanka Business School to have an amazing year ahead.

Clicks By- Now You See Me