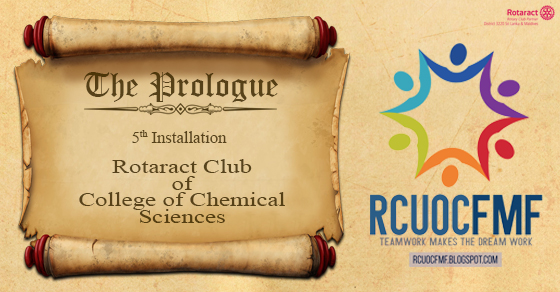 Posted at 07:37h in Installations, Others, Uncategorized by rcuocfmfadmin 0 Comments

The 5th Installation Ceremony of President Rtr. Imasha Yapa and her Board of Directors of the Rotaract Club of the College of Chemical Sciences for the term 2016/17, was held on the 25th of July 2016 from 6.30 pm onwards at the College premises. Rtr. Devmini Weerasuriya, Rtr. Mandree Dissanayake and Rtr. Nawangi Poholiyadde attended the ceremony on behalf of our club.

The ceremony marked the beginning with the lighting of the oil lamp after which the installation was called to order, followed by the Flag Salutation, Rotaract Invocation, Four-Way Test and the Rotaract Song. The Chief Guest for the evening was Rtn. Aruna Warnakulasuriya, the President of Rotary Club of Colombo Regency and the other dignitaries were District Rotaract Representative Rtr. PP Mohamed Husni, District Rotaract Committee Chair Rtn. PHF Sanjeewa Fernando, the Guest of Honour for the evening, Prof. S. P. Deraniyagala and special guest Prof. Priyani Paranagama, Dean of the College of Chemical Sciences.

After a warm welcome, the Secretary’s Report for the concluding term was delivered by the outgoing Secretary Rtr. Shashika Perera along with a very detailed and creative video presentation. The club has successfully concluded 30 projects, covering all the avenues. Some of their significant projects were “Be their smile”,” Light up a life”,” Cricketeract” and “Dancing Workshop”.

The Outgoing President Rtr. Udesha Bopitiya then addressed the gathering and shared her experiences as the outgoing President of the club. She emphasized on how she overcame the challenges and difficulties that she had to face during her Rotaract journey. Further, she revealed that each and every member of the club was a valuable jewel which made their dreams come true. She conveyed her sincere gratitude to her fellow board members for their immense support and commitment.

The Incoming President for the year 2016/17, Rtr. Imasha Yapa was then collared by the Outgoing President and was officially handed over the duties and the responsibilities of the club. The gathering was then addressed by the Incoming President Rtr. Imasha Yapa and she acknowledged each and every individual who helped and supported her throughout her journey. She also took that moment as an opportunity to express her sincere gratitude towards the outgoing President and her Board of Directors for the great contribution they have done for the club. Further, she revealed the theme for the new term; “From dreams to reality” and mentioned that she is looking forward to creating a wonderful year ahead.

District Rotaract Representative Rtr. PP Mohamed Husni then addressed the gathering and congratulated the Immediate Past President Rtr. Udesha Bopitiya and wished the incoming President Rtr. Imasha Yapa and the newly appointed board for a successful year ahead. He thanked the academic and non-academic personals of the institute and the Rotary Club of Colombo Regency for the immense support rendered towards the club.

Next on agenda was the address by the Guest of Honour for the evening, Prof. S. P. Deraniyagla. He congratulated the newly appointed president and the board and shared how individuals can gain advantages by engaging themselves in these club activities and how it will affect the community in a positive manner.

The gathering was then addressed by the Special Guest, Prof. Priyani Paranagama, the Dean of the College of Chemical Sciences. She mentioned that it is indeed a privilege to see the students excelling in Rotaract while carrying out their studies at the same time and she further mentioned the benefits that a person can gain by engaging themselves in extracurricular activities like this.  Then she concluded her speech by congratulating the new President and the board.

Next in line was the address by the Chief Guest Rtn. Aruna Warnakulasuriya, the President of the Rotary Club of Colombo Regency. He stated that Rotaract Club of College of Chemical Sciences has accomplished great achievements during the past years. Further, he shared some valuable techniques on how to carry out their work effectively and efficiently.

Next, the dignitaries were awarded tokens of appreciation for their presence followed by the felicitations of the other Rotaract and Interact clubs who were present. To mark the end of the event, the vote of thanks was delivered by the Secretary of the club Rtr. Chameli Liyanage.

The Rotaract Club of University of Colombo, Faculty of Management & Finance considers it a great opportunity to be a part of the installation ceremony and extends best wishes to the Rotaract Club of College of Chemical Sciences for a successful year ahead.