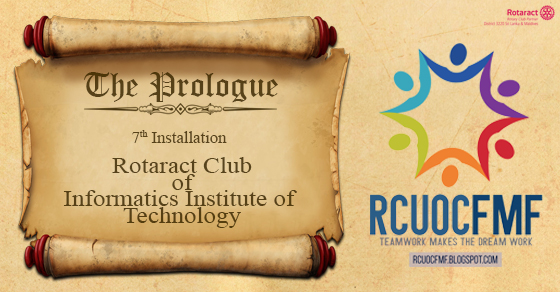 Posted at 05:42h in Installations, Others, Uncategorized by rcuocfmfadmin 0 Comments

The 7th Installation Ceremony of the Rotaract Club of Informatics Institute of Technology was held on the 23rd of July 2016 at the institute premises. The President, Rtr. Rumesh Thiruchelvam and his Board of Directors took office at this solemn ceremony and our club was represented by Rtr. Akhila Wijetunga and Rtr. Shenali Fernando.

The event began with the lighting of the traditional oil lamp and the Chief Guest for the evening was Rtn. Suharda Ranasinghe, the President of the Rotary Club of Nugegoda.

After the dignitaries took their respective seats at the head table, the installation was called to order by the Outgoing President Rtr. Shenal Mendis followed by the Flag salutation, Rotaract Invocation, Rotary four-way test and the Rotaract song. After the gathering was warmly welcomed, the Secretary for the year 2015/16 presented the report for the term 2015/16 along with a creative video which showcased the memories collected while completing many successful projects throughout the year. Some of their significant projects were “Beach Clean-up”, “We-talk” & “Hotdog Showdown”.
Afterwards, the gathering was addressed by the Outgoing President Rtr. Shenal Mendis and he expressed his gratitude to Rtr. Punith Gunasekara, his predecessor, for trusting him with the responsibility of the club and all the members for their enthusiasm and support throughout the year. He then introduced the new President for the year 2016/17, Rtr. Rumesh Thiruchelvam.

Then came the most significant part of the day, which was the collaring of Rtr. Rumesh Thiruchelvam and officially handing over all the duties and responsibilities of the club.


Incoming President Rtr. Rumesh then addressed the gathering and showed appreciation for all the past presidents of the club. He then introduced the logo and the theme for the term 2016/17; “Engage, Lead, Sustain”. The Directors were then introduced and their badges were pinned on them by the President.

Following up, the District Rotaract Representative Rtr. PP Mohamed Husni delivered his speech. He emphasized the importance of technology in the modern world  and appreciated the commitment of the members as part of the Rotaract family while managing work and studies at the same time. At last, he requested to continue their good work, as professionals will add more value to the Rotaract community.

District Rotaract Committee Chair for the year 2016/17, Rtr. Sanjeewa Fernando took the stage and recognized the importance of the members as they are the pillars of this organization. He then assured of his constant support for the club.
Next, another significant event took place; launching of the website of RCIIT by DRR Rtr. Mohamed Husni. President Rtr. Rumesh Thiruchelvam recognized this moment as a milestone in their path to reach great heights as they are a technology-based institution and thanked the IT director for all the hard work he had put in to achieve this dream in just one month.

Next on agenda was the address by the Guest of Honor, Mr. Hiran Wickramasinghe a Director of IIT, which was followed by the address of Rtn. Suharda Ranasinghe. She quoted Mahatma Gandhi and Blessed Mother Theresa and advised us to do whatever we do wholeheartedly and happily.

After the tokens of appreciation were given to the dignitaries the stage was opened for felicitations. Many clubs including ours congratulated the past president and his board for a marvelous job done and wished all the very best for the newly appointed president and the board for a successful year ahead.

The final item on the agenda was the vote of thanks by the Secretary for the year 2016/17 Rtr. Oshani Singapuliarachchi, thus concluding the Installation Ceremony.

All who participated then met for refreshments and fellowship in the hall.

The Rotaract Club of the University of Colombo, Faculty of Management & Finance was glad to be a part of the installation ceremony of RCIIT and wishes the club a successful year ahead.

Clicks By- Now You See Me