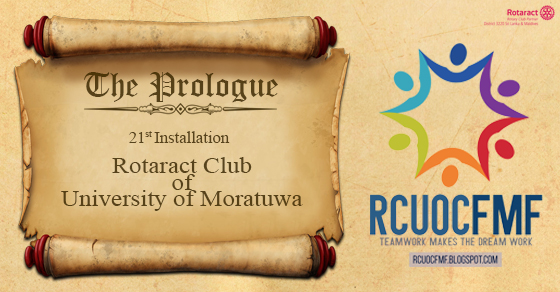 Posted at 04:45h in Installations, Others, Uncategorized by rcuocfmfadmin 0 Comments

The Installation Ceremony of President Rtr. Chamal Kuruppu and his Board of Directors of the Rotaract Club of University of Moratuwa for the term 2016/17 was held on the 30th of July 2016 from 5.30 pm onwards at the DHPL Auditorium. Registrations started at 5.00 pm and Rtr. Manahari Singarachchi, Rtr. Isuri Alahakoon and Rtr. Udanee Silva attended the ceremony on behalf of our club.


The ceremony commenced with the lighting of the oil lamp by the dignitaries after which the installation was called to order by the Outgoing President Rtr. Amitha Bandara, followed by the Flag Salutation, Rotaract Invocation, Four-Way Test and the Rotaract Song. The Chief Guest for the evening was Rtn. Roshan Perera, President of Rotary Club of Colombo West and other dignitaries were District Rotaract Representative Rtr. PP Mohamed Husni, District Rotaract Committee Chair Rtn. PHF. Sanjeewa Fernando and the Guest of Honour, Prof. K. K. C. K. Perera, Dean of the Faculty of Engineering, University of Moratuwa.

After welcoming the gathering, the Secretary’s report for the term 2015/16 was delivered by the Outgoing Secretary Rtr. Achini Herath following an eye catching video on the projects undertaken during the year. Among those, the award winning projects were ‘Are you Ready’, ‘CAST4’, ‘Sojourn’ and ‘Hand-in-Hand’.


Next, the audience was addressed by the Outgoing President Rtr. Amitha Bandara where he emphasized on the theme ‘Hope Rekindled’. He mentioned about the expansion of the membership base of the club while sharing some of his thoughts on the projects executed during his term of service. He then thanked the dignitaries, his predecessors, his Board of Directors and all the club members for the immense support rendered throughout the year in order to successfully accomplish all they have done so far. In appreciation of the Outgoing Board members, Rtr. Amitha Bandara presented awards in recognition of the dedication and hard work they have put forth throughout the past year.


Then, an introduction to the Incoming President was given by Rtr. Dasuni Samarakoon mentioning his special skills and abilities being the only IU Director who accomplished to achieve the Gold Award for the most outstanding IU project in the Rotaract District Assembly 2016. Following this, Rtr. Amitha Bandara collared Rtr. Chamal Kuruppu as the President of RCUOM and officially handed over the responsibility of the club.

The audience was then addressed by the President for the term 2016/17 Rtr. Chamal Kuruppu and he shared some of the experiences and life lessons gained during his Rotaract journey followed by the launch of the new logo and the new theme ‘Letting them shine’.


Next in line was the introduction to the Board of Directors for the year 2016/17 and it is as follows;

Chief Guest Rtn. PHF Rohan Perera, Chairman of Platinum Holdings (Pvt) Ltd delivered his speech highlighting on the famous saying “Youth is wasted on the young” and mentioned that  it is important to make the best out of each day without wasting it. He also outlined three principles he follows in life which are; learn to forgive, learn to do something good to someone everyday and to not complain.


The gathering was then addressed by the District Rotaract Representative Rtr. PP Mohamed Husni where he took the opportunity to congratulate Rtr. IPP Amitha Bandara for taking the lead of initiating a sustainability plan for the club for three years.


Next, the District Rotaract Committee Chair Rtn. PHF. Sanjeewa Fernando addressed the gathering and shared a valuable message with the audience; “Knowledge, skills, money and education comes later while the human values, honesty and integrity should come first”.


Final address for the evening was done by the Guest of Honour Prof. K. K. C. K. Perera. In his speech he stated that we are embarking on a mission to become catalysts of change in others’ lives. He then shared a meaningful message “Grab the opportunity that has come in our way, and not just live a legacy but leave a legacy” and concluded his speech by wishing Rtr. Chamal Kuruppu and his Board the best of luck for a successful year ahead.

Tokens of appreciation were distributed to the dignitaries for the evening and the stage was opened for felicitations. Finally, the Secretary for the term 2016/17 Rtr. Hansika Sandeepanie, delivered the vote of thanks to mark the end of the ceremony followed by the national anthem.


The Rotaract Club of University of Colombo, Faculty of Management & Finance congratulates Rtr. Chamal Kuruppu and his Board for their appointments and extends well wishes for a successful year ahead.