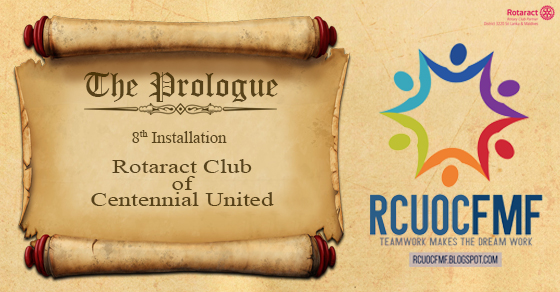 Posted at 04:20h in Installations, Others, Uncategorized by rcuocfmfadmin 0 Comments

The Installation Ceremony of President Rtr. Brintha Mathavasunderam and her Board of Directors for the term 2016/17, took place on the 24th of July 2016 at the Colombo City Hotel. Rtr. Udanee Silva, Rtr. Malith Mendis and Rtr. Lakna Rajapaksha attended the ceremony on behalf of our club.


The event began with the welcome address by the Club Service Director Rtr. Midushan Rhodes. Then, the Secretary’s Report was presented by the outgoing Secretary Rtr. Brintha Mathavasunderam along with a short video clip.


Next , the outgoing President, Rtr. PHF Nuzrath Benazir Farook took the stage and recognized the organizations, Past Presidents, Board of Directors, Committee members and non-rotaractors for being an immense support in making her year a success and awarded tokens of appreciation to the respective individuals. Then, she introduced and collared the President for the year 2016/17, Rtr. Brintha Mathavasunderam and officially handed over the duties and responsibilities of the club.


President Rtr. Brintha introduced their theme for the year ‘Aim high and persevere’, emphasizing that she and her board would thrive to reach greater heights mainly focusing on Youth Development with the intention of enhancing professional and personal development while building trusted partnerships to achieve sustainable development.


She then introduced the Board of Directors for the year 2016/17, which is as follows;

The Chief Guest for the evening, Rtn. Kausha Kalpage, President of Rotary Club of Colombo Centennial addressed the gathering and extended an open invitation for all Rotaractors to join Rotary in the future.


Next up on the agenda was an entertainment item, followed by DRR Rtr. PP. Mohamed Husni’s speech where he mentioned that the strength of the club is its members and President Rtr. Brintha would undoubtedly take the club to greater heights with the support of its members.

Then, the Keynote speaker for the day, Rtn. Fayaz Huda took the podium and stressed on the importance of sensitizing ourselves to situations around us, being contextually aware and overcoming physical limitations.


Finally, DRCC Rtn. PHF Sanjeewa Fernando addressed the gathering, after which the floor was opened for felicitations. On behalf of our club, Rtr. Malith Mendis wished all the best for Rtr. Brintha and her board for a great year ahead. The felicitations were followed by the Vote of Thanks by the newly appointed Secretary Rtr. Lahiru Aberathna and everyone gathered was invited for fellowship and refreshments upon the termination of the 8th Installation Ceremony of the Rotaract Club of Centennial United.


Greetings and well wishes to Rtr. Brintha and her Board of Directors for an amazing year ahead from the Rotaract Club of University of Colombo, Faculty of Management & Finance!