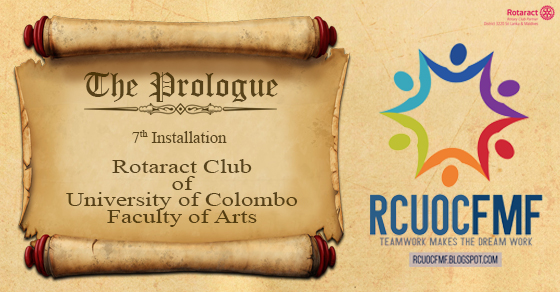 18 Aug The 7th Installation Ceremony of the Rotaract Club of University of Colombo, Faculty of Arts

Posted at 03:30h in Installations, Others, Uncategorized by rcuocfmfadmin 0 Comments

Installation ceremonies signify new beginnings; as fresh blood takes on the burden of previous legacies, striving to be bigger, better and stronger communities than before. On the 29th of July, 2016 the 7th Installation Ceremony of the Rotaract Club of University of Colombo, Faculty of Arts was held at the DHPL building auditorium, to mark the beginning of the term of Rtr. Amristar Wickramaratana, President for the year 2016/17 and her Board of Directors. Rtr. President Hiruni Perera, Rtr. Ruvini Nuwangi, Rtr. Isuri Alahakoon, Rtr. Kalani Perera, Rtr. Harindi Jayasuriya, Rtr. Akhila Wijethunga, Rtr. Malith Nirmal and Rtr. Heshan Sakuntha attended the installation on behalf of our club.


The Rotaract Club of University of Colombo, Faculty of Arts was chartered on the 26th of March 2010. Driving an impressive portfolio of signature projects including “Baila Night”, “DebateMate” and “IRBT”; the institution based club sponsored by the Rotary Club of Colombo Uptown, is known for producing members of consistent caliber and substance throughout its lifetime, including bringing forth two District Rotaract Representatives Rtr. Abdul Wahid Sathar and District Rotaract Representative Elect Rtr. Anuradha Senanayake.

After the lighting of the oil lamp to symbolize the initiation of the ceremony, the installation was called to order by the outgoing President Rtr. Charya Gamalath followed by the Flag Salutation, Rotaract Invocation, Four-Way Test and the Rotaract song. The attendees were warmly welcomed by the project chairperson Rtr. Yureshika Perera, subsequent to which Rtr. Pramodha Weerasekara delivered the Secretary’s report for the year 2015/16. Achievements, signature projects and significant collaborations within the past year were outlined through the report, which was concluded with a short video showcasing the club’s Rotaract journey; the memories, the hardships, the tears and the laughter.


Shortly thereafter, the gathering was addressed by the outgoing President Rtr. Charya Gamalath who expressed her sincerest gratitude toward the director board who supported and guided her throughout the term of 2015/16 and emphasized her belief in Rtr. Amristar Wickramaratana and her capacity to guide the club to its full potential. Highlighting the importance of believing in yourself, knowing your friends and never hesitating to help others, she concluded her speech by wishing her successor and board a fabulous year ahead.


Then followed the highlight of the evening, as the audience witnessed the collaring of Rtr. Amristar Wickramaratana as the President for the year 2016/17, indicating the official bestowment of all tasks and responsibilities with regards to the club.

The spotlight now shifting towards President Amristar Wickramaratana, she recalled how she entered the university as a naïve student, and how Rotaract guided her in to become a free-thinker, a leader, a team-worker and a better friend, while simultaneously motivating her to achieve her personal goals. Highlighting the significance of creating and discovering new possibilities within the club and the community of Rotaract, the theme of the club for the year, “New Possibilities” was officially unveiled. She outlined her plans for improving the dynamics of the club by increasing membership and developing fellow members in terms of both quality and quantity; stressing on her aim of working closely with the District and the theme of “Vision to Action”. She then introduced the Board of Directors for term of 2016/17, better known as the “Ladies in Charge”.

Following the introduction of the board, the Guest of Honor Rtn. PHF PP Clarence Seimon of the parent club, Rotary Club of Colombo Uptown, addressed the gathering. Congratulating the outgoing President and her board for a job well done, he commended the club on effectively and efficiently balancing all avenues and offering a wholesome Rotaract experience for its members. Concluding his speech, he extended his best wishes to president Rtr. Amristar Wickramaratne and her board on behalf of the President and members of the Rotary Club of Uptown.


Next on the agenda was the address by District Rotaract Representative Rtr. PP Mohamed Husni, who encouraged all present, to think of new possibilities beyond boundaries; to focus on generation of new action with said opportunities and bring about a positive change wherever they can.


Subsequently, the District Rotaract Committee Chairperson Rtn. PHF Sanjeewa Fernando took the floor, and congratulated both the incoming and outgoing boards for their drive, commitment and accomplishments, and ended his speech with the renowned saying, “Coming together is a beginning; keeping together is progress; working together is success.”

After a brief, yet enjoyable entertainment item, the Youth Services Committee Chair Rtn. PHF Selvarajah Maherakanth addressed the gathering, praising the club for a job well done throughout the past term and offering well wishes for the newly appointed board.


Next up on the agenda, was the address of the Dean of the University of Colombo, Faculty of Arts, Professor Athula Ranasinghe, who commended the Rotaract initiative, and its significance in developing leadership and other soft skills.


After distributing the tokens of appreciation to the dignitaries, the floor was declared open for felicitations, upon which the vote of thanks was delivered by the Secretary for the year 2016/17 Rtr. Pramodha Weerasekara marking the end of the ceremony.  As everyone rose to pay tribute to the nation by singing the National Anthem, the 7th Installation Ceremony of the Rotaract Club of University of Colombo, Faculty of Arts was terminated. All Rotaractors, Rotarians, Interactors, friends and family present gathered for refreshments and fellowship afterwards.