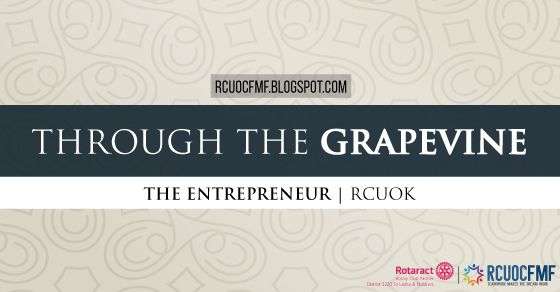 03 Aug ‘THE ENTREPRENEUR’- Rotaract Club of University of Kelaniya

Posted at 05:40h in External Club Events, Others, Uncategorized by rcuocfmfadmin 0 Comments

I have always wanted to participate in one of those programmes where you get motivated to be an Entrepreneur; a trend-setter; an influencer. Likewise there are many others who were waiting for one of these events. The Rotaract Club of University of Kelaniya took the initiative and made the wait end. “The Entrepreneur” was organized by them in order to bring out the Entrepreneur within us benefiting nearly 50 participants who took part in the programme.

This amazing three and a half hour programme with the theme “Innovate | Create | Inspire”, was held on the 16th of July at St. Peters College Main Hall. The resource persons were none other than three of the very successful and inspiring Entrepreneurs this country has ever produced.
The first speaker of the event was Mr. Rohan Pallewatta, who is the current Executive Chairman of Lanka Harness Co. (PVT) LTD, which manufactures automobile airbags and seat belts for worldwide companies such as Toyota, Nissan, Honda etc. Mr. Pallewatta is reputed internationally for the motor vehicle airbag sensor which he produces in a Sri Lankan facility and as a supplier to some of the world’s leading automobile manufacturers. This extraordinary personality gave an insight to his successful journey in the corporate arena from the inception to date as an entrepreneur. He reconfirmed his entrepreneurial skills at ‘The Entrepreneur’ by singing a song while playing his guitar before starting his speech also showing how multitalented he is.
After a short question and answer session, entered another extremely enthusiastic entrepreneur who has managed to take old school agriculture to a totally new level; Mr. Sunesh Rodrigo, who is currently the Deputy General Manager, Group Human Resources MAS Holdings and the founder of “foodigrow”.
Mr. Sunesh, who is a founding partner of Vantage Consultancy, has years of experience as a trainer and is known for his participatory style of training. For this reason, he managed to secure two special grants from the US government to conduct Youth Skills Development Programmes island wide during the year of 2014.
The entrance of this young and energetic man took the programme up to a 100%. He managed to get every individual involved in his discussion. The main point discussed was how to be an entrepreneur, how to identify ideas which would value millions and how to execute them. Making the discussion more interactive, he got the participants to identify the problems in the current world and also to pitch a few solutions, which some participants did. He promised a prize of Rs. 100,000 for the best idea and the participants who pitched their ideas were asked to contact him to carry on with the process. After sharing his life story, he left a point for everyone to think; “ups and downs in life are ok, but you’ve got to cut it through them to thrive”. With Mr. Sunesh coming to an end with his session, all participants were enlightened on how to identify an awesome or crazy idea and turn it into a business.
How to carry out a business is the next problem. This was addressed by one of the greatest entrepreneurs Sri Lanka has ever produced. Being more than just an entrepreneur, this visionary leader has managed to build a Billion Rupee Empire – Kapruka.com
Mr. Dulith Herath, the award-winning founder and CEO of Kapruka, was successful in expanding a mere website running on one laptop to a reputed billion-rupee company in just over 11 years of operation.
This King of Sri Lankan E-commerce spoke about how he has been able to remain sustainable and competitive amidst numerous challenges and hardships he has faced in the business arena. He also mentioned about his new venture, “Grasshoppers” for which he said he would devote the rest of his entire life to bring all e-commerce businesses together and provide infrastructure for business.
For the participants, Mr. Herath was one of the proving factors that Sri Lankans have the capacity to achieve great heights and he advised on how we should adjust our lifestyle and routine so we could make the maximum out of it. He being an individual who works 18 hours a day, is the perfect person to advice on this considering the success he has achieved. It made every one of us in the audience realize that hard work does pay off.
The Entrepreneur came to an end giving a kick start to new thoughts and ideas. As Mr. Dulith mentioned, the “Entrepreneurs to be” who participated at the event spoke to each of the resource persons to get their issues clarified further.
This project organised by the Rotaract Club of University of Kelaniya was a great initiative and was very helpful for the crowd that participated. We wish all the very best for them to do more events of this sort to educate and motivate the Sri Lankan youth who has a great level of potential to take over the world in the corporate arena.
Written By-
Clicks By- Charuni Dissanayake Photograpghy