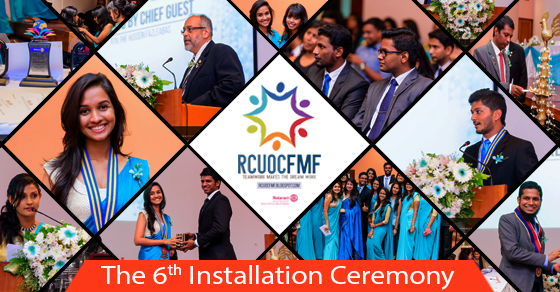 10 Sep The 6th Installation Ceremony – Turning Over a New Leaf

What kind of memories would an installation bring back??


If you are a guest, it’s a day full of speeches, felicitations, awards, videos, a lot of photographs and you would also get a first-hand look into another club’s heart and soul. But, when you are the host and it’s your very own club, it’s a whole different experience. Starting from the tremendous effort and time invested by the members to make the event a success till the very day you see the fruits of your labor, it is indeed really nerve wrecking.


When the 26th of August arrived, our club members enthusiastically gathered at the DHPL Auditorium, with the ladies in shades of sea green like a host of Sea Nymphs and the gentlemen looking smart, all suited up for the most anticipated event in our Rotaract calendar.


The event commenced with the registration of the 150 odd attendees, followed by the arrival of the Dignitaries which comprised of the Chief Guest for the evening, Rtn. PHF Hussein Fazleabas, President 2016/17, Rotary Club of Colombo Midtown, District Rotaract Committee Chair Rtn. PHF Sanjeewa Fernando and District Rotaract Representative Rtr. PP Mohamed Husni.


Foremost, the traditional oil lamp was lit by the Dignitaries and the Sergeant-at-Arms for the year 2016/17 Rtr. Malith Nirmal Mendis, called the house to order. This was followed by the Flag Salutation, Rotaract Invocation, Four-way Test and the Rotaract Song.

Next, the Secretary for the year 2015/16 Rtr. Nilukshi Jayawardena presented the Secretary’s Report, which focused on the main highlights of the past Rotaract term; 30+ projects carried out under different avenues, membership growth and all the awards and achievements of the club, proving it was no doubt the most outstanding year our club has ever had. A short video was also played afterwards, which included photos and clips of all the sweet memories we shared during the past year.

Then, the President for the year 2015/16 Rtr. Praveen Fernando addressed the gathering, where he took the opportunity to extend his heartfelt gratitude to each and every individual who helped the club; starting from our Faculty Advisor, Dr. Arosha Adikaram, Dean, Faculty of Management and Finance, Prof. R. Senathiraja, the members of the Rotaract District Committee, our sponsor club; the Rotary Club of Colombo Midtown and most importantly the members of our club, for all the hard work they put in to make his term of service a success. He also took the time to present the award for the Most Active Rotaractor of the year, which was awarded to Rtr. Akhila Wijetunga for the support he extended to the club in all ways possible throughout the term. He then gave away certificates and tokens of appreciation to his Board of Directors, who were his pillars of strength in making the year a success.


Then came the most awaited moment of the evening; the collaring of the new President Rtr. Christeena Hiruni Perera. Rtr. Niroshan Weeraman gave an interesting introduction to Rtr. Hiruni, showing who she is as a person and a leader and proving that she is well deserving for her title with her capabilities, vision and dedication. Following on, the outgoing President Rtr. Praveen Fernando collared Rtr. Christeena Hiruni Perera as the President for the year 2016/17 and officially handed over the responsibilities of the club.

Following this, President Rtr. Hiruni took the podium and started her speech by asking the question, “Why did you join Rotaract?”In answering this question, she revealed that the true reason why she joined the Rotaract movement was to do community service and she has truly come a long way from just wanting to serve the community, to leading a team of passionate people to serve and add value to the society as well as to themselves. She also thanked all those who helped her throughout her Rotaract journey and promised to take the club to even greater heights in new term.


Next, the Board of Directors for the year 2016/17 were inducted as follows;

After the induction of the new board, District Rotaract Representative Rtr. PP. Mohamed Husni was invited to address the gathering. He admired our Immediate Past President Rtr. Praveen Fernando for being a genuine individual and a great leader. He commended our club for its creativity and mentioned how we brand something and enhance its quality really well, using our blog as an example. He then described our President Rtr. Hiruni Perera as a proactive leader and advised everyone gathered to create an environment that encourages innovation and also to ensure that the University Based Rotaractors join other community based clubs.


District Rotaract Committee Chair Rtn. PHF Sanjeewa Fernando, was then invited to speak a few words to the audience. He narrated a story about a man wanting a customized car and the issue he faced after it was built, since they were unable to take it out of the garage as it was a couple of inches taller than the door. As solutions, the painter came up with an idea to take the car out the way it is and then touch up the damages and the engineer who designed the car suggested to break the door; however the owner did not agree with any of these suggestions. Then, the security guard came forward and asked whether he can give a suggestion and although the professionals mocked and laughed at him, he suggested reducing the air of the tires, which was evidently the most practical idea. In conclusion, what we had to learn from this story is, to always think from the layman’s point of view when doing projects without always looking at things in a professional view.


Next up on the agenda was the address by the Chief Guest for the evening Rtr. Hussein Fazleabas, President 2016/17, Rotary Club of Colombo Midtown. Followed by a brief introduction, he took the podium. He spoke about how Rotaract has grown throughout the years and encouraged Rotaractors to join Rotary, speaking of its importance. Also, he took the opportunity to congratulate our club for all of its achievements so far and mentioned that it has the longest name of any Rotaract Club he has encountered to date.


Following this, the floor was opened for felicitations. Many Rotaractors and Interactors from different clubs congratulated our club, proving what a well rooted tree the Rotaract Movement is with its branches spreading to all the corners of the country.


Finally, the 6th Installation Ceremony of the Rotaract Club of University of Colombo, Faculty of Management and Finance was terminated by President Rtr. Christeena Hiruni Perera, after the vote of thanks and the singing of the National Anthem and all attendees were invited for fellowship.


As the members of the club we would like to wish our President Rtr. Hiruni for an amazing year ahead together with her board and we promise to be there like a shadow helping to make the dreams a reality.