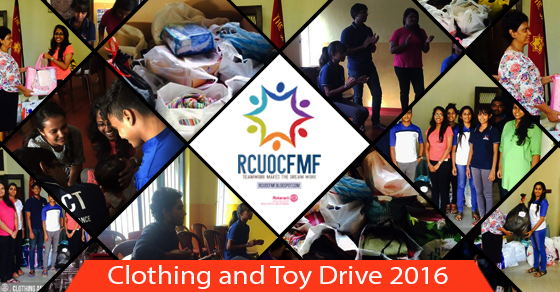 ‘Clothing and toy drive 2016’, the first community service initiative organized by our club for the term 2016/17, was held on the 21st of August at the Haven and Sunshine Home, which is administered by the Salvation Army. The home gives shelter to many children, teenagers and women who were sexually abused/pregnant or awaiting trials at court.


The project commenced on the 8th of August and continued for a period of two weeks with the focus of collecting clothes, toys, soap and other baby items which are in a usable condition to be distributed among the less privileged at the Haven and Sunshine Home.

All the sorted and labeled items were donated to the Haven and Sunshine home on the 21st of August, following an intriguing interactive session for the children and women. The session started off with a brief introduction to our club for the participants by Major Swarna and the rest of the session was carried out by Rtr. Shan Weerasinghe, displaying his verbal and people skills where he managed to get everyone to interact with each other, which was the sole purpose of conducting this session.

An interesting game was introduced to the participants during the ice breaker session which brought a smile on their faces and ultimately the session turned out to be really effective exceeding our expectations. The game was such that the participants were required to pass a box containing chits and when the music stopped the person who holds the box was supposed to take a chit out and perform what is mentioned on it. It was truly a fun filled game which assisted in revealing their hidden talents in front of everyone in terms of dancing and singing especially at a time when they lack opportunities to interact with the society.


The session continued to become more engaging and fun with the introduction of the game ‘musical chairs’ where everyone was delighted and contented. The manner in which they enjoyed the moment with us was simply astounding and unforgettable.


Refreshments were served after announcing the winner of the game, and the programme was brought to an end by conducting a sing along session where, chances were given for volunteers to sing a song of their choice backed by the rest of the girls to the beat of the guitar which made it more entertaining.

Finally, the interactive session was concluded and Major Swarna thanked us on behalf of everyone while being so grateful for the donations as well as for making this day a memorable and a fun filled one and wished us good luck for all our future endeavors.


With the successful conclusion of the ‘Clothing and toy drive 2016’, we would like to appreciate and extend our sincere gratitude to all those who invested their time and effort in bringing happiness to these beautiful children and women.