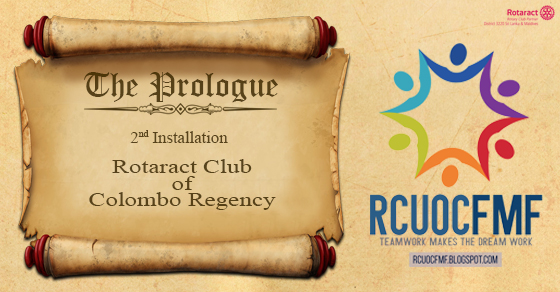 Posted at 23:55h in Installations, Others, Uncategorized by rcuocfmfadmin 0 Comments

The 2nd Installation Ceremony of President Rtr. Ramesh Seneviratne and his Board of Directors for the term 2016/17, was held on the 14th of August at the Royal Skills Center. On behalf of our club, Rtr. Devmini Weerasuriya and Rtr. Udanee Silva attended the event.

The ceremony commenced with the lighting of the traditional oil lamp by the dignitaries followed by the Flag Salutation, Invocation, Four-way Test and the Rotaract Song. The Chief Guest for the evening was Rtn. PP PHF Gihan De Alwis and the Guest of Honour for the evening was Rtn. Marshad Barry from the Rotary Club of Colombo North. The other dignitaries were District Rotaract Representative Rtr. PP Mohamed Husni and District Rotaract Committee Chair Rtn. PHF Sanjeewa Fernando.

Next, the Secretary’s Report for the year 2015/16 was presented to the gathering. The report drew special attention to some of the significant projects organized by the club; “Regency Family Sixes”, “Light up a Life”, “Coastal Cleanup”, “Walk of Orange”, “Out Reach” and “Mobile Medical Camp”.


The next item of the event was the speech by the President for the year 2015/16 Rtr. Rinzee Usoof. She thanked her Board of Directors and all the club members for their immense support given to make the Rotaract term 2015/16 a huge success. She also mentioned “Sky is not the limit for us”, further motivating the gathering. Thereafter, special recognition was made by awarding tokens of appreciation.

After a small introduction, the Immediate Past President Rtr. Rinzee Usoof collared the President for the year 2016/17, Rtr. Ramesh Seneviratne and officially handed over the duties and responsibilities of the club.

After the collaring of the new President, Rtr. Ramesh Seneviratne addressed the gathering and he revealed that it is always better to lose a second of your life than to lose your life in a second. He also thanked their sponsoring club, Rotary Club of Colombo Regency for their continuous support and then he unveiled the theme for the year, “Be the change to make a change”.

Thereafter he introduced the Official Board of Directors for the year 2016/17 which was as follows,

Next, DRR Rtr. PP Mohamed Husni addressed the audience. He congratulated the IPP Rtr. Rinzee Usoof and expressed warm wishes to the Incoming President Rtr. Ramesh Seneviratne. He concluded his speech by advising us to try to make use of every second in Rotaract.

Next on the agenda was the speech by DRCC Rtn. PHF Sanjeewa Fernando. He congratulated the Outgoing Charter President and informed the gathering about the importance of the “Four-way Test”. He also extended his wishes to the Incoming President and concluded the speech by motivating everyone to shine brightly.

The entertainment segment for the evening was an interesting game, where a box with 5 questions in it was passed around the audience while music was playing and once the music stopped, the person with the box had to choose one question and answer it. It was indeed a fun-filled game to everyone.

Next on the agenda were the speeches of other dignitaries who have been invited to the ceremony, including the address of Chief Guest Rtn. PP PHF Gihan De Alwis.

Then the stage was opened for the felicitations from all the other clubs and the attendees then gathered for refreshments and fellowship.

Rotaract Club of University of Colombo, Faculty of Management and Finance would like to extend warm greetings and well wishes to Rtr. Ramesh Seneviratne and his Board of Directors for an amazing year ahead.