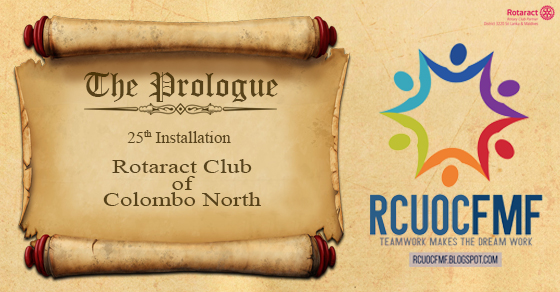 Posted at 12:28h in Installations, Others, Uncategorized by rcuocfmfadmin 0 Comments

The Installation Ceremony of President Rtr. Sakina Hatim and her Board of Directors of the Rotaract Club of Colombo North for the term 2016/17, was held on the 20th of August 2016, from 6.00 pm onwards at the DHPL auditorium. Registration of attendees was open from 5.30 pm onwards and our club was represented by Rtr. President Hiruni Perera, Rtr. Thilini Leeniyagolla, Rtr. Harindi Jayasuriya and Rtr. Manahari Singarachchi.


The gathering was warmly welcomed by the project Co-Chairperson Rtr. Ahmed Zeeshan, followed by an introductory video about the club and its members. Then, the outgoing Secretary Rtr. Fazlan Faiz delivered the Secretary’s Report for the term 2015/16, followed by a video on the projects undertaken during the past term.


Next, the gathering was addressed by the outgoing President Rtr. Hafiz Hassan, where he shared his thoughts on the successful term completed, with the support of his board members as well as all the club members and thanking them for the immense support rendered throughout the year. A special note of appreciation was given to our club for the implementation of project ‘Reach Out’, which was a collaborative effort of the two clubs.


Then, an introduction to the incoming President Rtr. Sakina Hatim, who was the lady of the evening, was given by Rtr. PP Amjath Yusuf mentioning some of the significant phases in her 8 years of Interact and Rotaract journey followed by a small video. Next, Rtr. Hafiz Hassan collared Rtr. Sakina Hatim as the President of Rotaract Club of Colombo North and officially passed on the responsibility of continuing the legacy of 25 years.


Next, the podium was taken over by the President for the term 2016/17 Rtr. Sakina Hatim and she shared some of the experiences and life lessons she gained during her Rotaract journey and she launched the theme for the new term; ‘We Rise by Lifting Others’. She concluded her speech with an end note of expressing sincere gratitude for everyone who has helped the club in numerous ways.


Then, the Board of Directors for the term 2016/17 was inducted by Rtr. Sakina Hatim, which is as follows:

After the introduction of the board members, the gathering was addressed by the District Rotaract Representative Rtr. PP Mohamed Husni, where he took the opportunity to look back at his Rotaract journey as a member of the Rotaract Club of Colombo North and how special it was to address the gathering at the Installation Ceremony of his home club.


Next, the District Rotaract Committee Chair Rtr. PP Sanjeewa Fernando delivered his speech based on a story which gave the valuable message of ‘appreciating others’.


Then, the gathering was addressed by the District Youth Services Committee Chair Rtr. PHF Selvaraja Maherakanth, where he congratulated Rtr. IPP Hafiz Hussain and Rtr. Sakina Hatim and her Board of Directors and shared some valuable advices with the audience.


Rtr. Roshane Jayampathy introduced the Keynote Speaker for the evening, Rtr. PHF Imtiaz Ismail and he took the podium next. He mentioned that the journey of a Rotaract Club is similar to a Roller Coaster Ride and stated the importance of marking 25 years of service as a club and producing the current District Rotaract Representative. He also urged all the clubs present to focus more on the membership of the club as a strong membership base will strengthen a club’s performance.


The final address for the evening was given by the Chief Guest Rtr. PHF Dushyantha Basnayaka. In his speech he mentioned how Rotary and Rotaract has molded his life, and how he was able to make a change in the society. He then took the time to congratulate Rtr. Sakina Hatim and ensured that the club is in good hands. He concluded his speech with an invitation to join in hands with a project carried out by Rotary Club of Colombo North.
Then, tokens of appreciation were distributed to the Dignitaries for the evening as well as for the members, acknowledging their service towards the club and the stage was opened for felicitation. To mark the end of the ceremony, the Secretary for the term 2016/17 Rtr. Ahamed Hussain delivered the vote of thanks, followed by the National Anthem.


The Rotaract club of University of Colombo, Faculty of Management and & Finance would like to congratulate and extend warm wishes to Rtr. Sakina Hatim and her Board of Directors for a successful year ahead.

Written By-
Clicks By- Revolution Portfolio