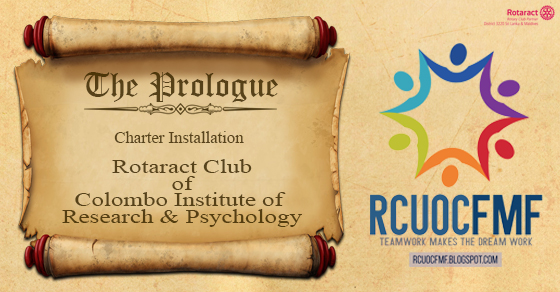 Posted at 05:27h in Installations, Others, Uncategorized by rcuocfmfadmin 0 Comments

The Charter Installation Ceremony of the Rotaract Club of Colombo Institute of Research and Psychology was held on the 15th of August 2016, from 6.30 pm onwards at the Capri Club, Colombo 03. The Charter President, Rtr. Krithiga Radhakrishnan and her Board of Directors took office for the term 2016/17 at this ceremonial occasion. Registration commenced at 6.00 pm and on behalf of our club, Rtr. Lakna Rajapaksha, Rtr. Udanee Silva and Rtr. Sarala Gunawardena attended the ceremony.


The ceremony commenced with the arrival of the Chief Guest and other Dignitaries. The Chief Guest for the evening was Dr. Darshan Perera, Director of Academic Affairs of Colombo Institute of Research and Psychology and other dignitaries were District Rotaract Representative Rtr. PP Mohamed Husni, Keynote speaker, Youth Services Chair Rtn. PHF Selvarajah Maherakanth, and the Guest of Honor, the Vice President and Youth Services Director of Rotary Club of Colombo Mid-City, Rtn. PHF Sharlene Muthumudalige.


The traditional oil lamp was lit by the Chief Guest, Guest of Honor and other Dignitaries. After the dignitaries took their respective seats at the head table, the installation was called to order and was followed by the Flag Salutation, Rotaract Invocation, Four-way test and the Rotaract song.

On behalf of the members of the Rotaract club of CIRP and the Rotary club of Colombo Mid-City, the gathering was warmly welcomed by Rtn. PP PHF Arabhinthan Kannudurai.


An introduction to the Charter President was given by Rtr. Shenella Cooray mentioning her skills, achievements, interests and amazing personality. Rtr. Krithiga Radhakrishnan was a well-known Interactor in school where she held the position of Secretary. She also received the award for the Best Interactor during the time she was appointed as the Editor of the Interact Zone.


Following this came the most significant part of the evening, where Rtn. PHF Sharlene Muthumudalige collared Rtr. Krithiga Radhakrishnan as the Charter President of the Rotaract Club of CIRP for the year 2016/17, and officially handed over the duties and responsibilities of the club.


The gathering was then addressed by the Charter President, who appreciated the tremendous and ever blooming support and cooperation given by the Rotary Club of Colombo Mid-City, the administration of CIRP, her family and friends in forming the club and thanked all the fellow Rotaractors for electing her to this prestigious position. She further stated that she would ensure the club would march towards excellence to become a dynamic club in the Rotaract District 3220.


Subsequently, she introduced the Board of Directors for the year 2016/17, which is as follows;

District Rotaract Representative, Rtr. PP Mohamed Husni delivered his address where he took the opportunity to congratulate the Charter President and the charter members. He emphasized the fact that not everyone gets the chance to become a charter member and it’s a very rare opportunity. Further, he requested all the other clubs to hold hands with Rtr. Krithiga and her team, as it would be an interesting mind game to work with Psychologists to be.

It was then the turn of the Keynote Speaker, Youth Services Chair Rtn. PHF Selvarajah Maherakanth to address the gathering. He stressed on the importance of Neuro-linguistic programming and how it can be used to recondition and relax our disturbed minds. He also requested the Rotaractors of the club to design a program to educate other Rotaractors on Neuro-linguistic programming and Psychology.


Next on the agenda was an entertainment item followed by the address of the Guest of Honor, Rtn. PHF Sharlene Muthumudalige. She quoted the famous saying “Success isn’t about how much money you make; it’s about the difference you make in people’s lives” and mentioned that the Rotaractors are granted with the opportunity to achieve such success. She assured of the Rotary Club of Colombo Mid-City’s continuous support and guidance to embark on the testing yet productive journey and urged all Rotaractors to join Rotary to do better work.


Chief Guest for the evening, Dr. Darshan Perera, then took the podium. He highlighted the importance of Rotaract and explained that in a time where human interaction is essentially discouraged in nearly every facet of life, clubs like Rotaract strive to instill the true meaning of friendship which is an essential part of humanity.


Tokens of appreciation were awarded to the Dignitaries for the evening and the floor was opened for felicitations. On behalf of our club, Rtr. Udanee Silva congratulated Rtr. Krithiga and her board and wished all the best for a successful year ahead. To mark the end of the ceremony, the vote of thanks was delivered by the Secretary for the year 2016/17 Rtr. Dilenthi Goonesekara, which was followed by the National Anthem.


Another significant event took place after the installation ceremony, where the first club service project, a dinner dance was held at the same venue. It was an open door for networking and fellowship.


The Rotaract Club of University of Colombo, Faculty of Management & Finance was glad to be a part of the installation ceremony and wishes the Charter President Rtr. Krithiga Radhakrishnan and her board all the very best for a successful Rotaract year.

Written By-
Clicks By- NowYouSeeMe