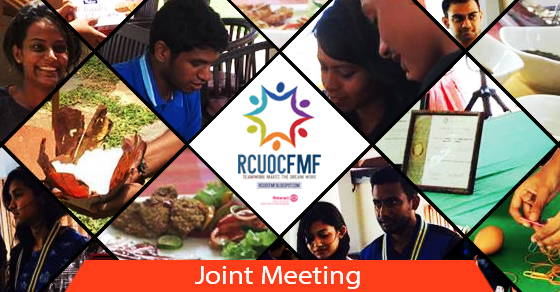 07 Sep Joint Meeting with the Rotaract Club of Negombo

Our club came together with the Rotaract Club of Negombo, on the 20th of August, at the Paradise Beach Hotel, Negombo for a joint meeting with a twist! The main objective of this meeting was to get to know each other, do a joint project and experience the two different cultures of the clubs.


The first stage started off at 10.00 am with the meeting being called to order and the official proceedings being conducted. Through the meeting, the members were updated about projects happening in both clubs as well as the District during the upcoming months and were encouraged to participate.

The second stage of the Joint meeting was the ‘President of the Month’ session. In this session a member from each club was proposed to take over the meeting after the formal proceedings were concluded. They had the task of getting all the members involved in a fun activity that would test both their creativity and out of the box thinking while building an environment where members from both clubs have to work together interactively in order to complete the activity.


Our Green Life Director Rtr. Mandree Dissanayake and the International Service Director of the Rotaract Club of Negombo Rtr. Minolie Fernando were selected as the Presidents of the month for this meeting. Both Rotaractors had put a lot of thought into the activity and it was a surprise to all of us as they kept it as a well-guarded secret up until the point they took over the proceedings. The activity consisted of the formation of 4 teams and each team was given materials such as glue, cello tape, cotton wool, straws etc along with a paper plate and an egg.


The activity? Build a nest for the egg using the material given and any materials that could be found from the immediate surroundings.


The challenge? The egg should be dropped from a height into the nest and the egg should not break and remain intact.


Each team was given 30 minutes to plan and implement their ideas and we saw a lot of creative designs come to life. Finally it was time to test the inventions. Three out of the four teams managed to save the egg and was awarded a gift. Hats off to the two presidents of the month for coming up with an activity that was different and a lot of fun.


The third stage of the Joint meeting; the kitchen challenge! This was done in line with the International cooking show ‘Masterchef’.  All the members were divided into 3 groups and carefully observed the Head Chef of the Paradise Beach Hotel, Chef Dias along with Chefs Premasisri, Chaminda and Sumedha demonstrate how to make their version of the ‘Batter Fried Fish with Fresh Salad’.


Once the demonstration was complete, the teams started on their dishes using all the equipment and ingredients given to them. The judging panel consisting of the afore mentioned chefs looked for both taste and creative presentation. With a time limit of 1 hour and a combination of experienced, amateur and even a few completely clueless cooks, it was a real moment of pressure just like in an actual Masterchef kitchen! Finally time was up and it was time to decide the cooking champions for the day. After a thorough tasting and discussion, one team was awarded as the winner and everyone got the opportunity to enjoy the dishes.

This marked the conclusion of the Joint Meeting and it was time for us to head back to Colombo. We carried back with us a lot of memories and definitely a lot of friendships.


We express our deepest gratitude for the Rotaract Club of Negombo for hosting this meeting and to our club members for making the time to travel to Negombo for this meeting despite exams. We would also like to specially thank Guide Club Directors Rtr.Krishan Balaji and Rtr. Kanishka Wijayasekara for joining us for the entire days’ programme and adding more value and entertainment to the day. This meeting paved the way to build a lasting bond between the clubs and we hope to give our fullest support for all the projects hosted by the Rotaract Club of Negombo.