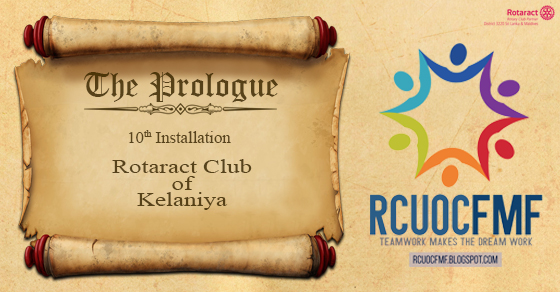 Posted at 11:45h in Installations, Others, Uncategorized by rcuocfmfadmin 0 Comments

After the welcome address, the Secretary’s Report for the term 2015/16 was presented to the audience. The outgoing Secretary, Rtr. Rukshani Adhihetty expressed her happiness and pride for completing 20 successful projects during the past term and gave special recognition to some of their significant projects, “Farewell”, “BBQ Night”, “Plant for Tomorrow “, “Poya Day”, “Think Pink 2015”, “My Dream School” and “Fork and Spoon”.

Next on the agenda was the address of the outgoing President Rtr. Chathushka Gunawardena and he passionately shared his thoughts on having had a great year of leadership while creating beautiful memories and friendships to last a lifetime. He extended his heartfelt gratitude to the Immediate Past President of their sponsoring Rotary Club, Rtn. IPP PHF Shirani Corea and her board and IPDRR Rtr. PP PHF Sathiyendra T Singham and the District Committee for their continuous backing and support. He also acknowledged his club members for the unparalleled spirit of work and compassion they showed throughout his term of service.

After a small introduction to the incoming President along with a beautiful video clip of her Rotaract journey so far, the Immediate Past President Rtr. Chathushka Gunawardena collared the President for the year 2016/17, Rtr. Rukshani Adhihetty and officially handed over the duties and responsibilities of the club.

Then, the newly appointed President Rtr. Rukshani Adhihetty took the stage dressed with her uniquely beautiful smile and promised her total commitment and love towards the betterment of the club. She thanked her parents for their undying support, IPP Rtr. Chathushka Gunawardena for trusting her with the position and her friends for always being very understanding about her tight schedules. She also mentioned that the club will be going forth with the same theme“Open Minds, Open Hearts”, which had been there since the revival of the club three years ago. Afterwards, she proudly introduced her Board of Directors for the year 2016/17 which was as follows;

Next on the agenda was the address by DRR Rtr. PP Mohamed Husni. He congratulated the newly appointed President and her board and expressed his satisfaction with the outgoing board’s contributions towards a better tomorrow. He reminded us that the Rotaract Club of Kelaniya was successfully able to produce two DRRs and he praised Rtr. PP Themiya Cabraal for his great contribution in reviving the club which has immensely supported the club stand where it is today. He expressed his full confidence in the newly appointed President to take more initiatives, to give life to innovations and achievements. Then he took that moment as an opportunity to introduce his latest initiative “Environmental Sustainability Team” to the Rotaractors, which provides a platform to address the environmental issues as one team, with fresh ideas and collaborative effort.

Next, the audience was entertained by Rtr. Surith Devagiri. He sang the songs “Mal Madahasa” and “Knocking on Heaven’s Door” mesmerizingly and the audience enjoyed the performance thoroughly.


The next item on the agenda was the address of DRCC Rtn. PHF Sanjeewa Fernando. In his speech, he revealed to us that it was Past DRR Jack from the Rotaract Club of Kelaniya who made the Rotaract Anthem a reality for Sri Lankans.

The Chief Guest for the evening Rtn. PHF Udaya Wijesena next addressed the gathering. He thanked the club for inviting him to grace the occasion and enlightened the audience on his journey through Rotary. He also shared the lessons he gained from the club on the importance of giving back to the society amidst the busy working life.

Then the stage was opened for felicitations, followed by the Vote of Thanks by the newly appointed Secretary Rtr. Thanushki Adhihetty and everyone gathered was invited for fellowship and refreshments.

Rotaract Club of University of Colombo, Faculty of Management and Finance would like to extend warm greetings and well wishes to Rtr. Rukshani Adhihetty and her Board of Directors for an amazing year ahead.