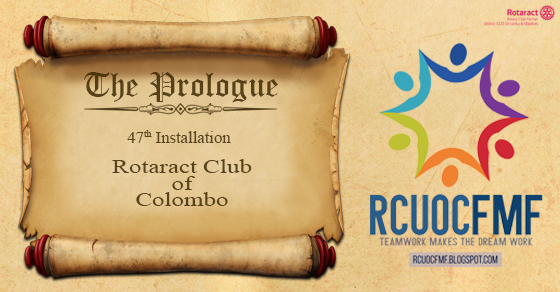 Posted at 06:36h in Installations, Others, Uncategorized by rcuocfmfadmin 0 Comments

The 47th Installation Ceremony of the Rotaract Club of Colombo was held at Akbar Brothers, Colombo 10, on the 6th of August, 2016. Rtr. Peshala Samarathunga, Rtr. Oshani Weerakkody and Rtr. Amaya Karunaratne represented our club at this glamorous installation ceremony of the incoming President Rtr. Inaya Bongso and her Board of Directors.


The installation ceremony of the Rotaract Club of Colombo marked its beginning with the lighting of the oil lamp by the dignitaries, after which the installation was called to order, followed by the Flag Salutation, Rotaract Invocation, Four-Way Test and the Rotaract Song. The Past President of Rotary International, Rtn. K. R. Ravindran graced this prestigious event as the Chief Guest whilst the President of Rotary Club of Colombo, Rtn. PHF Mohamed Abidally was the Guest of Honour for the evening. Other dignitaries were District Rotaract Committee Chair Rtn. PHF Sanjeewa Fernando, RCC’s

After the gathering was warmly welcomed, the outgoing Secretary Rtr. Raakhee Dhansingani delivered the Secretary’s Report for the year 2015/16. She also conveyed her sincere gratitude to the founder and the Charter President of the Rotaract Club of Colombo, Rtn. PHF PP Ruzly Hussain for his continuous support and for his esteemed presence at the installation. She also proudly informed that they were successfully able to carry out 35 projects for the year 2015/16 and was able to receive much recognition at the District Assembly by receiving the Gold award for the ‘Best Installation’ and the Silver award for the ‘Best International Understanding Project’.


The outgoing President Rtr. Shiraz Akbarally then addressed the gathering and expressed his appreciation to his Board of Directors and all the club members for taking the weight off his back and rendering an immense support throughout the year in order to end his term of service on a high note. He also did not forget to thank Past Presidents for the confidence they showed in him and entrusting the club responsibilities.


As per the agenda next up was the most awaited moment of the evening; the President for the year 2016/17 Rtr. Inaya Bongso was collared by the outgoing President and was officially handed over the duties and the responsibilities of the club.

The audience was then addressed by the President for the term 2016/17 Rtr. Inaya Bongso and she was humbled that she had been given the responsibilities as the 47th President of a pioneer Rotaract Club of Sri Lanka with such a glorious past and promised the members of the Club that she will give it her best ‘shot’. She also thanked the immediate Past President Rtr. Shiraz Akbarally for all his time and effort spent on improving the club under his great stewardship over the last 12 months. She concluded her speech by emphasizing the importance of making an unbeatable team together by devoting themselves to ‘Fostering Fellowship’ and through hard work and camaraderie.

Next, DRR Rtr. PP Mohamed Husni addressed the audience and congratulated the Immediate Past President Rtr. Shiraz Akbarally for all the outstanding achievements and wished the incoming President Rtr. Inaya Bongso and the newly appointed board for a successful year ahead. He also emphasized the importance of Sustainable Development and how to promote it through means of improved digital communication services, new technologies and innovations.


DRCC Rtn. PHF Sanjeewa Fernando then congratulated the outgoing President for a job well done and praised the incoming President and wished her and her team for a wonderful year ahead.


Adding more glamour to the event Kamishka Morais, Winner of TNL Onstage 2015 entertained the audience by a beautiful singing item.


Next, Guest of Honour, Rtn. PHF Mohamed Abidally, President of Rotary Club of Colombo, addressed the gathering. He emphasized the value of passion and passing it to others and also conveyed his compliments to the outgoing President for the amazing job and wished Rtr. Inaya Bongso for a very successful year ahead.


Following the Introduction to Chief Guest, the spotlight was on the Past President of Rotary International, Rtn. K. R. Ravindran who emphasized on the new option of Rotaractors being able to join Rotary while being a part of Rotaract. He also didn’t forget to congratulate both the outgoing President and the incoming President.


Marking a new milestone, 47th Installation Ceremony of Rotaract Club of Colombo concluded with the Felicitation by Rtr. Aqeel Rizni followed by the Vote of Thanks by the Secretary Rtr. Ruki Abdulhussein and the National Anthem. Then the house was called to order for refreshments and fellowship.


Rotaract Club of University of Colombo, Faculty of Management & Finance was indeed grateful to be a part of the Installation Ceremony of the Rotaract Club of Colombo and would like to extend warm wishes Rtr. Inaya Bongso and her Board of Directors for a successful year ahead.