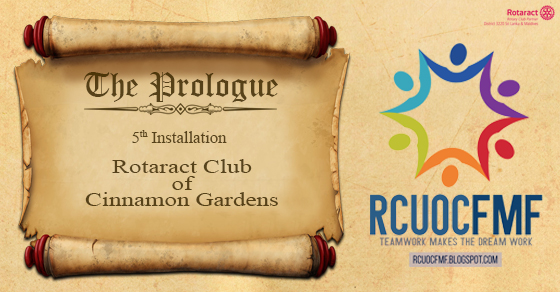 Posted at 04:55h in Installations, Others, Uncategorized by rcuocfmfadmin 0 Comments

The Installation Ceremony of President Rtr. Suhirthan S. Kennedy  and his Board of Directors for the term 2016/17, of the Rotaract Club of Cinnamon Gardens was held on 5th of August 2016, at the DHPL building auditorium, Colombo 10. On behalf of our club Rtr. Koshini Coorey, Rtr. Chathurika Wijerathne, and Rtr. Nishadi Mendis attended the event.


The event commenced with the arrival of the Chief Guest and other Dignitaries. The Chief Guest for the evening was Rtn. Danushka Weeratunga and the Special Guest was Rtn. PHF PDG Imran Hassan. The other Dignitaries were; District Rotaract Representative Rtr. PP Mohamed Husni, Youth Services Chair Rtn. PHF Selvarajah Maherakanth and District Rotaract Committee Chair Rtn. PHF Sanjeewa Fernando.


After lighting of the oil lamp, the house was called to order by the President for the year 2015/16 Rtr. Yeheshan De Silva, followed by the Flag Salutation, Rotaract Invocation, Four-way Test and the Rotaract song.


After the gathering was warmly welcomed by Rtr. Lakitha Wedaarachchi, the Secretary’s Report for the year 2015/16 was presented to the audience by the outgoing Secretary Rtr. Darshika   Perera, along with a very attractive video clip that included many photographs of the events and moments they treasured throughout the past term. Some of the significant projects were,“Baila Night”,“Beach Clean-up”,“Rotaract for Cataract” (with the partnership of our club and Rotaract Club of NSBM),“Sparks” and“BBQ Night”.


As per the agenda, next up was the address by the outgoing President Rtr. Yeheshan De Silva. He mentioned that they were successful in completing all the projects they planned and thanked his board, club members and parents for the immense support they’ve given to make their dreams come true. At last, he congratulated the incoming President and his board for a successful year ahead.


Then the incoming President addressed the gathering and acknowledged the Rotary Club of Cinnamon Gardens and he highlighted and explained the importance of the quote; “Together we can make a difference”. Then the new Board of Directors for the year 2016/17 was inducted and it is as follows.

Then, the District Rotaract Representative Rtr. PP Mohamed Husni took the stage and thanked all the Rotaractors who attended the installation and mentioned that this is the Rotary Membership Month. He finished his speech by emphasizing the importance of retaining and recognizing members.


Then, the audience was entertained by a beautiful song “Nadee Ganga Tharanaye” performed by Rtr Newton.


The District Rotaract Committee Chair Rtn. PHF Sanjeewa Fernando delivered his speech and he invited all the Rotaractors to come and join the tree planting project organized by the District Governor. He took a frog in a pot as an example and explained the importance of doing the right thing at the right time to the audience.


Then the keynote speaker Rtn. PHF PDG Imran Hassan addressed the audience. He pointed out the value of being a Rotaractor or an Interactor and explained the significance of joining a charity organization to the new generation. Further, he explained that determination, courage and ambition make a better person by taking real world examples of great personalities such as John F. Kennedy, Abdul Kalam and Steve Jobs.


Next item on the agenda was the address by the Chief Guest Rtn. Danushka Weeratunga. He mentioned that the transparency and the level of standards of the Rotary movement make it one of the best charity organizations of the world. He further explained about the value of leadership skills to an individual and invited all the Rotaractors to come and join with the Rotary Club of Cinnamon Gardens.


After tokens of appreciation were distributed to the Dignitaries, the floor was opened for felicitations. Then, the vote of thanks was delivered by the Secretary for the year 2016/17 Rtr. Sanjeewa Fernando, followed by the National Anthem. All who participated then met for refreshments and fellowship in the hall.