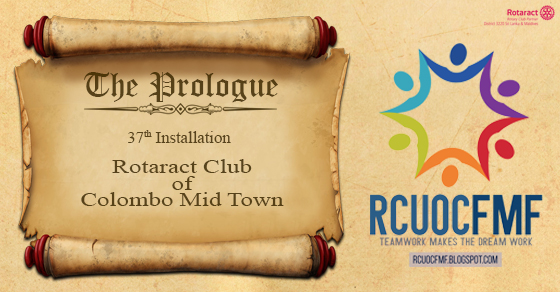 Posted at 13:06h in Installations, Others, Uncategorized by rcuocfmfadmin 0 Comments

The Installation Ceremony to induct the 37th President, Rtr. Malshani Nanayakkara and her Board of Directors of the Rotaract Club of Colombo Mid Town, was held on the 16th of August 2016, from 7.00 pm onwards at Postal Head Quarters Auditorium, Colombo 10. On behalf of our club, Rtr. Akhila Wijetunga, Rtr. Shenali Fernando and Rtr. Senuri Suriarachchi attended the event.


The registrations started at 6.00 pm and the arrival of the Chief Guest, District Youth Services Chair Rtn. PHF Selvarajah Maherakanth marked the commencement of the event. The other dignitaries for the evening were District Rotaract Committee Chair Rtn. PHF Sanjeewa Fernando and District Rotaract Representative Rtr. PP Mohamed Husni. The commencement was followed by the traditional oil lamp being lit by the Chief Guest and the other dignitaries.


The installation was then called to order by the outgoing President, Rtr. Zayan Jeffry, followed by the Flag Salutation, Rotaract Invocation, Rotaract Four-way test and the Rotaract Song.

The gathering was then welcomed by Rtr. Basith Sameer, the project Chairperson of the installation and next the Secretary’s Report for the year 2015/16 was delivered by the outgoing Secretary Rtr. Rashmi Sadanandan along with a video clip which included photographs from the projects carried out by the club during the year 2015/16. The projects were briefly explained by the outgoing Club Service Director Rtr. Nafli Mufthi. Rotaract Club of Colombo Mid Town has achieved great success during the year 2015/16. Its key projects include Midtown Day which increased its club membership by 85% and Project Light Up which won the award for the most outstanding Community Development Project for the year 2015/16.

The gathering was then addressed by the outgoing President Rtr. Zayan Jeffry. He shared his most cherished experiences and memories as the President of the club, where he also mentioned that those experiences so far have kept him alive. He expressed his sincere gratitude to the Past Presidents, his Board and his club members for the massive support they extended to end his term of service with immense success.


The outgoing President, Rtr. Zayan Jeffry then distributed tokens of appreciation to his board members in recognition of their service for the year 2015/16.


The President for the year 2016/17, Rtr. Malshani Nanayakkara was then collared by the outgoing President Rtr. Zayan Jeffry and was officially handed over the responsibilities and duties of the club.

The house was then addressed by the incoming President Rtr. Malshani Nanayakkara, who modestly acknowledged all those who have supported her throughout her journey as a Rotaractor. She further stated that she hopes in this year the Mid-Towners will strive for greater heights that would touch more lives and celebrate the differences as well as the similarities in their diverse culture under their theme for 2016/17 “Building friendships and brightening futures”.

District Rotaract Representative Rtr. PP Mohamed Husni then addressed the gathering and congratulated the Immediate Past President Rtr. Zayan Jeffry and wished the newly appointed Board headed by President Rtr. Malshani Nanayakkara to have a successful year ahead. Next on the agenda was the address by the District Rotaract Committee Chair Rtn. PHF Sanjeewa Fernando.


The house was then addressed by the Chief Guest for the evening District Youth Services Chair Rtn. PHF Selvarajah Maherakanth. He extended his earnest wishes to the outgoing Board for their efforts and for the incoming Board for a fruitful year ahead.


Next, the presence of the Past Presidents of the Rotaract Club of Colombo Mid Town was recognized which was followed by the felicitations of the other Rotaract and Interact clubs. The vote of thanks was then delivered by the Vice President for 2016/17 Rtr. Muzaffer Sadique to mark the end of the occasion.


The 37th installation ceremony of the Rotaract Club of Colombo Mid Town was terminated and terminated by the President for the year 2016/17 Rtr. Malshani Nanayakkara and the attendees gathered for refreshments and fellowship.