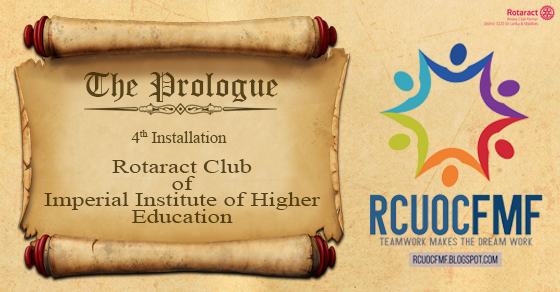 Posted at 09:25h in Installations, Others, Uncategorized by rcuocfmfadmin 0 Comments

The Installation Ceremony of the President Rtr. Tarini Pilapitiya and her Board of Directors for the year 2016/17 of Rotaract Club of Imperial Institute of Higher Education, was held on 29th of August, 2016 at the IIHE building. Rtr. Shenali Fernando, Rtr. Lakna Rajapaksha and Rtr. Sapuni Senarathne attended the event representing our club.


The proceedings for the day began with the lighting of the oil lamp by the dignitaries followed by the Flag Salutation, Rotaract Invocation, Four-way Test and the Rotaract Song. The dignitaries were then invited to take their respective seats at the head table.


Youth Service Advisor of the Rotary Club of Capital City, Rtn. Gayan Maddumarachchi warmly welcomed the audience. He mentioned that reviving the club as well as having more than 30 members are remarkable achievements and advised to work towards the sustainability of the club by having a succession plan to take the club forward. Finally, he invited the President and the club members to work closely with his Rotary Club when executing the upcoming projects.

Next, the President of Rotary Club of Capital City for the year 2016/17, Rtn. PHF. Gihan Panditaratne addressed the gathering. He mentioned that it was a great pleasure to collar the reviving President of IIHE, Rtr. Tarini Pilapitiya as the 4th President of the club. He mentioned that he expects that Rtr. Tarini would take the club to the next level. Finally, he assured the fullest support and guidance from the Rotary Club of Capital City and wished the new team for a very successful year.


Rtr. Afrah Saheed then introduced the incoming President. Rtr. Tarini was a member of the basketball team and the school choir and she is an event coordinator for an event management firm. She also mentioned that their club is still laying the foundation and it is important that they lay the right foundation, emphasizing Rtr. Trarini is the best person for this position.


Next, the President for the term 2016/17, Rtr. Tarini Pilapitiya addressed the gathering. She mentioned that it was a tough journey as they had to start again from the beginning and expressed her happiness about the current club with 34 members as it was initially started with 3 individuals. She shared, “Phoenix”, the bird burning itself on a funeral pyre and rising from the ashes is selected as she thinks it is the perfect symbol for their club and then introduced the theme for the new term “Rising higher together”.

Next was the entertainment item by “4 Piece” band from IIHE. Mewan, Rashane, Feron and Pubudu were able to grab the undivided attention of the audience.


The gathering was subsequently addressed by DRR Rtr. PP Mohamed Husni. He welcomed all the members to this wonderful Rotaract family and shared how Rotaract opens up opportunities to its members. He acknowledged the commitment of the members towards the success of the installation and wished all the best for the newly appointed board.


Next the DRCC Rtn. PHF Sanjeewa Fernando addressed the gathering and thanked the Rotary Club of Capital City for helping the club to revive and requested to nourish and train them to achieve success. He advised the newly appointed President, Rtr. Tarini Pilapitiya to have a goal and to work towards it.


Youth Service Chairperson Rtn. Selvarajah Maherakanth then addressed the gathering and mentioned that there were a lot of ground work for reviving a club. He mentioned that Rotaract will help us build ourselves, improve our soft skills and present ourselves, as we have joined an International network of Professionals and Entrepreneurs.

Finally, the Chief Guest for the day, CEO of Imperial Institute of Higher Education, Ms. Theekshani Dolamulla addressed the gathering. She mentioned that when we work on our own desire, we will be able to specialize in it and when all the talents gather together that will make a perfect family. She also mentioned that even though social media connects people at the moment, soon people would be bored and stressed and they will walk out as they need movements like Rotaract to interact with people. She concluded her speech by congratulating the incoming board for a successful year ahead.


The floor was then opened for felicitations and the installation was brought to a successful end with the vote of thanks by the Secretary for the term 2016/17, Rtr. Aanisha Cuttilan followed by the National Anthem.


The Rotaract Club of University of Colombo, Faculty of Management & Finance, extends best wishes to Rtr. Tarini Pilapitiya and her Board of Directors for a successful and fantastic year ahead.