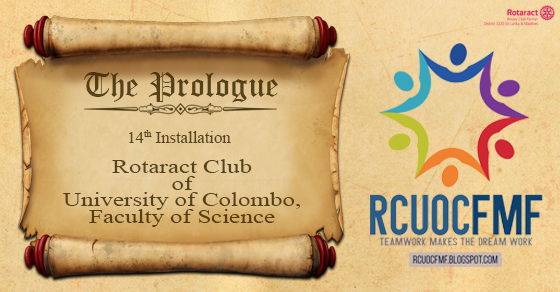 20 Sep The 14th Installation Ceremony of the Rotaract Club of University of Colombo, Faculty of Science

Posted at 13:04h in Installations, Others, Uncategorized by rcuocfmfadmin 0 Comments

The Installation Ceremony of the Rotaract Club of University of Colombo, Faculty of Science for the year 2016/17, was held on the 19th of August 2016, from 6.00 pm onwards at the Auditorium of the Department of Mathematics, Faculty of Science, University of Colombo. The registrations started at 5.30 pm and our club was represented by Rtr. Ranithri Samarawickrama, Rtr. Dishan Leo, Rtr. Kemitha Jayamaha, Rtr. Nimesha Dangedara, Rtr. Mandree Dissanayake and Rtr. Pulara De Silva.


After the lighting of the oil lamp by the dignitaries, the installation was called to order, followed by the Flag Salutation, Rotaract Invocation, Rotary Four-Way Test and the Rotaract song. The gathering was then warmly welcomed by the Project Co-Chairperson, Rtr. Isurika Weerasinghe.

Next on agenda was the Secretary’s Report for the year 2015/16, by the outgoing Secretary Rtr. Navindra Keerthisinghe, which was followed by a short video which highlighted the achievements, events and projects undertaken by the club during the past year.

The audience was then addressed by the President for the year 2015/16, Rtr. Bhasura Perera. He began his speech with the quote, “A champion team will always beat a team of champions”, illustrating the immense support given by his board towards the achievements of the club and to overcome every challenge as a team. He then thanked his fellow board members and club members for their continuous support and commitment given throughout the year. The outgoing President then congratulated and stated that he is confident that the incoming President and his board would take the club to even greater heights during their term of service. He then distributed tokens of appreciation to his Board of Directors, who led the club during the term 2015/16.

The gathering was then addressed by the incoming President Rtr. Yasas Diyanananda and he acknowledged each and every individual who supported him throughout his journey. He also expressed his sincere gratitude towards the outgoing President and his board for their great contribution towards the club during their term of service. Further, he revealed the theme for the new term; “Lend a hand. Make a difference”.


He then introduced the Board of Directors for the year 2016/17, which is as follows;

Next on the agenda was the address by DRR Rtr. PP Mohamed Husni. In his speech he shared a very interesting fact about the date of the installation; it was the World Humanitarian Day. Then, he congratulated the Immediate Past President Rtr. Bhasura Perera and wished the incoming President Rtr. Yasas Diyanananda and his Board a successful year ahead. He concluded his speech with a quote by Robin Sharma; “Leadership is not a title. It’s about your behavior”.


DRCC Rtn. PHF. Sanjeewa Fernando then addressed the gathering. He first congratulated the outgoing President Rtr. Bhasura Perera and then wished the incoming President Rtr. Yasas Diyanananda and his board for a successful year. Then he narrated the story of “Priorities and a Jar”, to emphasize the significance of prioritizing the most important things in life over the less important things.


The evenings’ proceedings gathered momentum with an entertainment segment and thereafter Rtr. Amaya Sathurusinghe introduced the Keynote Speaker for the event, Mr. Roshan Mahanama, to the audience. He started off his speech with a story about a boy cleaning a river and stated that “Leaders are not born, leaders are made” and “Leaders are not extraordinary, leaders are ordinary people who do extraordinary things”. He also extended his good wishes for both the outgoing and incoming Boards.

Next on the agenda, was the address by the Guest of Honor, President of the Rotary Club of Colombo Down Town, Rtn. Thusitha Kularatne. He wished the incoming President and his board for a successful year ahead.


Next, the dignitaries were awarded tokens of appreciation and it was followed by the felicitations of the other Rotaract and Interact Clubs who were present at the ceremony.


To mark the end of the Installation Ceremony, the vote of thanks was delivered by the Secretary for the year 2016/17 Rtr. Jayani Gurusinghe, which was followed by the National Anthem. Then the Ceremony was terminated and the attendees gathered for refreshments and fellowship.


The Rotaract Club of University of Colombo, Faculty of Management & Finance, extends best wishes to Rtr. Yasas Diyanananda and his Board of Directors for a successful and fantastic year ahead.