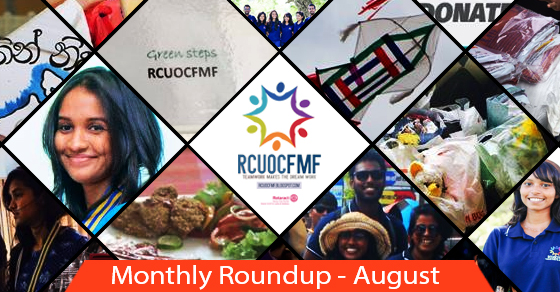 Posted at 06:36h in Round Ups, Uncategorized by rcuocfmfadmin 0 Comments

Here’s a look at how the month of August was for our club!

The 6th Installation Ceremony of RCUOCFMF
The main highlight of the month; the 6th Installation Ceremony of our club, was held on the 26th of August, at the DHPL Auditorium from 7.00 pm onwards. With the planning and the guidance of the project chairs, Rtr. Oshani Weerakkody and Rtr. Haresh Wijayanayaka, the event was able to successfully mark the commencement of the new Rotaract term 2016/17 in a glamorous manner.


Amidst the presence of more than 150 attendees, Rtr. Christeena Hiruni Perera was collared as the President of our club, followed by the induction of her Board of Directors for the year 2016/17.


We take this opportunity to thank each and every individual who helped and guided us to make our installation ceremony a success and all those who were present at the event to wish us well for the new term.

Joint Meeting and Kitchen Challenge
As an initiative to strengthen the bond with other Rotaract Clubs, joint meetings are planned to be held once in every quarter with a fellow Rotaract Club in the District. As such, the first joint meeting was held with the Rotaract Club of Negombo, on the 20th of August, at the Paradise Beach Hotel. It was indeed a great start to this initiative, as at the end everyone was delighted that they were part of the meeting and were already looking forward to the next joint meeting which will be held in the next quarter.


Followed by the general meetings of the two clubs, ‘Presidents of the month’ Rtr. Mandree Dissanayake from our club and Rtr. Minolie Fernando from RCN organized an ice breaker session where teams were asked to build a nest out of the given materials to hold an egg which was to be dropped from a small height. This game resulted in great collaboration, team work and creativity and gave the opportunity for the two clubs to bond well.

The highlight of the day was the “Kitchen Challenge” organised by RCN. The members were first shown how to make a delicious fried fish dish by the Chefs of the hotel and later the members who were grouped into 3 teams had to make the dish on their own. This initiated friendly competition among the groups and at the end of the competition, the members of the two clubs were enriched with the new friendships they made.

Clothing and Toy Drive 2016
The Clothing and Toy Drive-2016, chaired by Rtr. Udanee Silva and Rtr. Chinthani Lucksharika, was a Community Service project organized by our club in aid of the women and children at the Haven and Sunshine Home administered by the Salvation Army. This establishment provides refuge to children, teenagers and women who were sexually abused/pregnant or awaiting their trials at court.


Under this project, we donated clothes, toys and other items that were required to fulfill their day-to-day needs and as a value addition, some of our club members took part in a fun filled interactive session with these women and children, which was undoubtedly a memorable day for all those who participated.

“Nil Ahase Wasanthaya 2016”- Kite Fest
The Rotary family partnered up with the Kite Sri Lanka Organization and the Presidential Task Force on Drug Prevention to organize the National Kite Festival for the year 2016; ‘Nil Ahase Wasanthaya’, which was held on the 28th of August, at the Negombo Beach Park. This time around, the Kite Fest was held under the theme “A Drug Free Country” and thus, the event kicked off with a “Drug Awareness Walk” with the participation of many Rotarians, Rotaractors and Interactors. The walk was then followed by the Kite fest where participants had the opportunity to create and fly their own kites and color the blue skies.


This proved to be an exciting event filled with creativity, fun and wonderful people and gave us memories to cherish for a long time to come.

Green Steps
‘Green steps’ is an initiative undertaken to create awareness among the undergraduates at the University of Colombo, Faculty of Management & Finance, about the proper use of water facilities, maintaining cleanliness and saving electricity within the faculty premises.


Under this project, notices were put up in all 3 languages (Sinhalese, Tamil and English) to deliver effective messages about the most important yet highly neglected habits which should be properly inculcated in the young minds. The ultimate goal of this project was to create awareness and involve the undergraduates in maintaining a standardized code of ethnic hygienic behavior for a better tomorrow.


This project was chaired by our very own Director of Green Life, Rtr. Mandree Dissanayake.

Know Your Board
‘Know Your Board’, which started in the month of July to introduce our newly appointed Board of Directors, was wrapped up this month. Under this project, a series of unique and amusing character sketches was posted on Facebook which gave everyone the opportunity to get to know our Board in a manner like never before!


A very special thank you to our Joint Directors of Public Relations, Rtr. Marky Sandaruwan and Rtr. Lakna Rajapaksha, for chairing this innovative project. 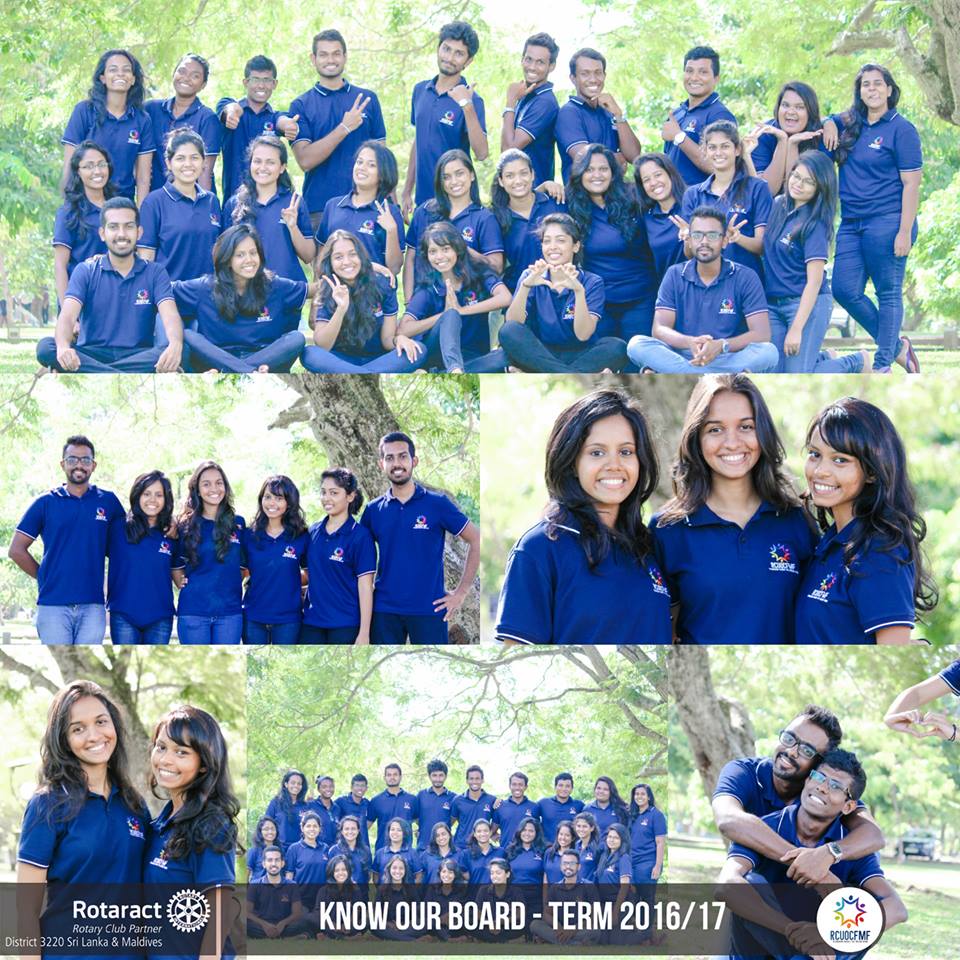 August was an action packed month for not only our club, but also for most of the other clubs in the District. RCUOCFMFers took part in all the installation ceremonies held during the month and wish to extend warm wishes and best of luck to all the Presidents and their Board of Directors for a thriving year ahead.


We were also pleased to be a part in the following events;

BURN- Phase 2
‘BURN’, organized by the Rotaract Club of General Sir John Kotelawala Defence University, gave its participants a unique experience by combining a ZUMBA fitness session along with a floating lantern festival and an exciting carnival and after party. This eventful project took place on the 21st of August, at the Race Course Grounds with the participation of many enthusiastic Rotaractors and non- Rotaractors. 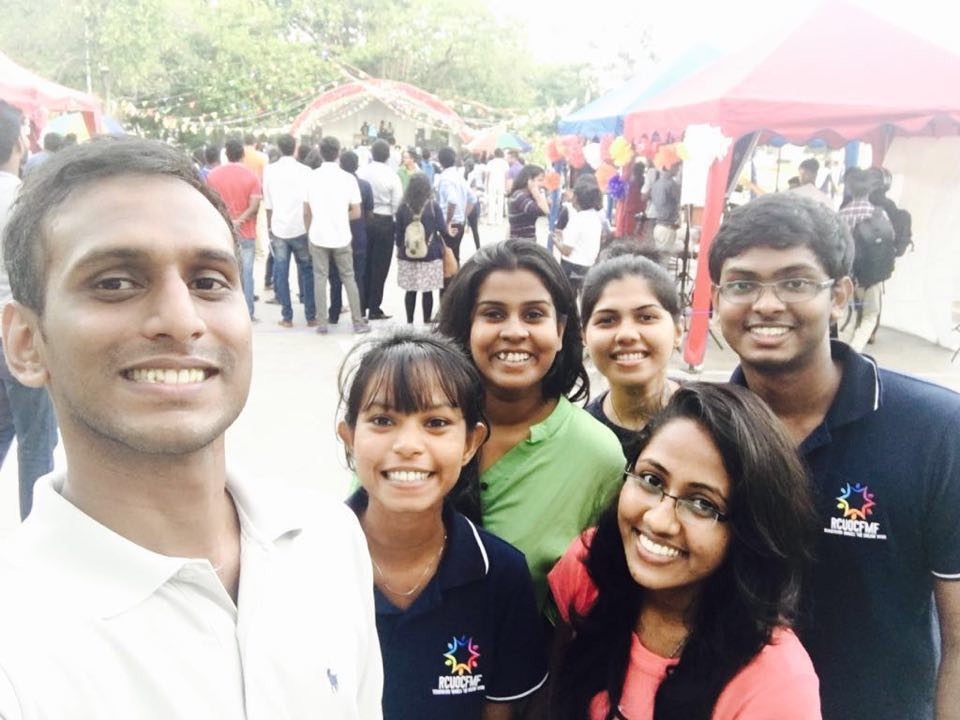 Kaleidoscope
Organized by the Rotaract Club of University of Colombo, Faculty of Arts, ‘Kaleidoscope’ was the club’s first community service project for this term, where they visited the Jinananda Children’s Development Centre in Wellawatte, on the 22nd of August. The afternoon was well spent, starting from a delicious meal and then painting and playing cricket which brought out the aesthetic and athletic skills in the kids residing in this establishment.


Though it might have been a small contribution, our club was pleased to be a part of this worthy project, which no doubt brought immense joy to those underprivileged children.


Team Up to Clean Up
‘Team Up to Clean Up’ was an initiative taken by the Rotaract Club of Edulink International Campus under the avenue of Community Service, to get people involved in creating a cleaner, friendlier environment. As the first phase of the project, RCEIC organized a beach cleaning event at the Wellawatte beach, on the 31st of August and was joined by many Rotaractors from various clubs, including ours.